If eastern Washington were to secede? 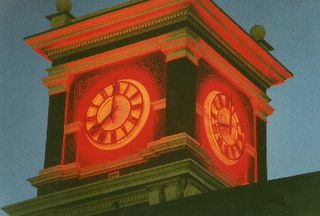 If eastern Washington were to secede would WSU and Bryan Clock be left high and dry?

Splitting Washington State in half?

What would happen to the higher education system?

Some West side "Blue Stators" will smugly point out that the state spends more, per capita, for roads in "tax cut" eastern Washington country than it does west of the Cascades.

More road miles to maintain per person in the wide open spaces of the east side.

It's true, if one ponders the duties of state government, the west side, with the economic engine of its urban areas, has a point.

This can certainly be seen in higher education; a major function of state government.

Splitting Washington would devastate both sides of the divide. More universities are on the east side while most of the students come from the west side.

Evergreen State College, in Olympia (west side), is much smaller and not called a University.

Would those students come to WSU if they had to pay out of state tuition?

This situation could devastate the economy of Pullman, Washington which can be seen as an island of "blue state" in "red state" eastern Washington.

That college town, where I happen to be from (born and raised), is sometimes referred to as the "Athens of the Palouse."

If the west and the east were to divide, both sides would suffer higher education blues. College town economies of the east would be hurt by lack of students and the accompaniment of state funding. The west side would suffer from too many students with lack of classroom space. Enrollment ceilings, on the west side, are bad enough already.

Outside the business of state government, west side folks might have to swallow some of their smugness also. Much of the power that runs west side cities comes from dams on the Columbia River, in eastern Washington.

Some of western Washington's garbage goes east for disposal. Much of it goes all the way to eastern Oregon, to waste repositories around Arlington, Oregon.

Farmer's markets with local produce and musicians flourish on the west side, but where would the dairy farmers be with out hay from east of the mountains?

I once had a conversation with a truck driver who described what goes into milk, supposedly produced by Whatcom County (west side) dairy farms. Some grass is grown locally, but lots of hay is trucked in from eastern Washington. Feed corn comes from far afield. It is grown in places like southern Idaho and even the Dakotas. Dairy feed is even sweetened, sometimes, with cotton seed from places as far as Australia.

Yes, "local feel gooders," we live in a global economy. Global at least as long as people insist on living the way we do.

If eastern Washingtonians really wanted to play hardball and cut off some of the private commerce, this entire state would be devastated. However, that could not happen as long as both sides remain in USA where commerce crosses state lines easier than do local tax dollars or college students.
Posted by Theslowlane Robert Ashworth at 8:19 PM

Speaking of western Washington, that's a great article you posted on your website. I'd never given thought to the effect such a division would have on state colleges.

I'd heard about that proposal to split the state. I just read your discussion of that, and it
sounds like it would be real impractical. But I know
there are people on both sides of the Cascades who would like to see that.
As for the enrollment problems at State Universities, I wonder if two of my nephews might end up having to go to EWU to get into college. All the other colleges, from what I understand, have cut off
new entrants. They thought Central was too far away,and now they may have to go a lot farther!
That picture from WSU was interesting. I believe
there's a Bryan Hall at the WSU I worked at, in
Kansas, too. I think it was one of their administration buildings.

I think it would be beneficial to the state if it were to split into West and East Washington. The Western coastal half supports the economy of the rest of the state, and the coming drought would then be the responsibility of the Republicans who control eastern Washington. The drought will have far less significance for the rainy western half, and the easterners can stop complaining about the "libruls" in Seattle and Olympia. Although such a split would inevitably lead to two more seats in the Senate for the Republicans, a Missouri compromise could be made, by allowing the District of Columbia to become a state, which would no doubt elect two Democratic senators. The Missouri Compromise, when Maine broke off from Massachusetts, allowing Missouri to be a slave state in exchange for a free state of Maine, was during a period in history when compromise could be found in this country. Now, however, with the deadlock that the Republicans have put this country into, proposing to do away with the filibuster, even when they control all branches of government, compromise may be no longer achievable. Thus, I'm all for states with clearly delineated red halves, like Washington, to split in half. Indeed, I'd be pleased if the predominantly southern red states would secede.

I wrote you at your invitation, after finding your website by googling "splitting a state."

People who live for themselves, for their own pleasure, could be considered "garbage" in the sense they do not contribute anything. We are not talking about the weak and powerless, mind you (the unborn, Terri Schiavo), but about people with the ability to do good, with a tremendous opportunity to learn and grow, who squander that opportunity on booze, sex, and frivolity.

Splitting Washington State, contrary to your thoughts on the matter, is a good idea. We "red-staters" have nothing in common with the others. The ideal situation would be for Seattle, Portland, San Francisco, and possibly LA to secede from the Union and form "The People's Republic of West America". They can keep any businesses foolish enough to stay there. They can raise taxes to 97%, make smoking illegal, make abortion mandatory, and implement any other cockeyed social experiment on their own nickel (not mine and not yours).

I'm going to stay in (rural) Washington. This is my state, not theirs. My kids will be home-schooled, and learn where babies come from when they are very young... They will not learn about condoms or abortion, but will experience what it means to be part of a family so they will be ready when it's their time.

I will smoke a pipe, and not feel it is evil. My wife will raise vegetables. We hope to raise livestock, and remain self-sufficient. And yes, we will own guns, and there's not a thing Seattle can do about it.

See, I just want to be left alone, and splitting the state seems to be the only way of accomplishing this.

What's next? Illegal to smoke in our own vehicles? Mandatory tribute to Seattle's "greatness"? Have people in Ellensburg fund a giant fallic statute in downtown Seattle?

Sorry, just frustrated, and your site came up in my research. Hope you choose to be on the free side (our side) if and when the split comes.

"Some of western Washington's garbage goes east for disposal. Much of it goes all the way to eastern Oregon, to waste repositories around Arlington, Oregon."

Being from the east side (Spokane & North Idaho) I've seen this discussion pop up repeatedly.

North Idaho, eastern Washington and western Montana all feel remote, financially abused and otherwise ignored by the higher population regions of their states. They want to join forces and combine into a new state called Columbia.

Being a bit more radical, I was hoping to see North Idaho secede from the US altogether to become a kind of free trade zone between the US and Canada.

Now that work has forced me to live in the megalopolis of Seattle, I muse about secession for Western Washington. As its own country, Western Washington could become a financial turnstile between the US, Canada, Asia and the rest of the Pacific.

Of course Seattle's population would become truly vast, a $50,000 house would sell for $2 million instead of only $300,000 and I would have to move to the Yukon and miss the whole thing.

I came across your site after the recent election. I am a Western Washingtonian by birth but have recently settled into the East side, it is so nice to be in the East. I feel strongly that either the mode of representation for the state of Washington must be reformed to protect the rest of the state from being ruled by only a few counties or that the states must split in order for the people to be fairly represented. I was looking at the fair vote of Nebraska and Maine, while not perfect, it would at least allow the Easterners to have a voice. In regards to the out-of-state tuition. I know for a fact that students from Washington attend Oregon schools without paying out-of-state tuition,that being said, the argument that the higher education will be so devastatingly affected is not very accurate. Students will continue to attend the school of their choice.