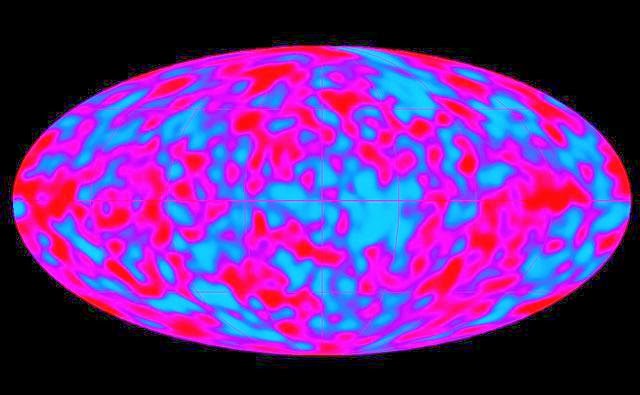 Even though this isn't the gravitational waves. It's an old image of the cosmic background radiation in microwave and wow, I love the colors. Image: A map of the CMB created by the COBE satellite (credit: NASA, DMR, COBE Project). 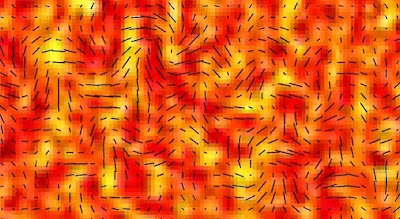 In my file box of correspondence is this letter from National Geographic Magazine, circa 1983 (image below). I bring it up in light of the recent discoveries about the Big Bang Theory related to gravity waves in the cosmic background radiation.

The recent finding is strong evidence for the "inflation theory" version of the Big Bang. Inflation theory has been around a while and was featured in a 1983 addition of National Geographic Magazine. They did a big colorful feature on theories about the origin of the universe. When I read the article, back in 1983, I thought I had found a mistake. Article talked about the edge of the universe expanding billions, or maybe even trillions, of miles during it's first seconds of life. I thought, "how can that be as it would be traveling faster than the speed of light?" Supposedly nothing can travel faster than the speed of light so I wrote them thinking I had found a mistake.

I thought, maybe they'll even print my letter in National Geographic. It's hard to get a letter published there as they have millions upon millions of readers. Letter didn't get printed, but I did get this interesting form letter back. Letter was to all of us folks who brought up that question and thought we had found a mistake. One of the letters on that "non mistake" was printed and the rest of us got this form reply. 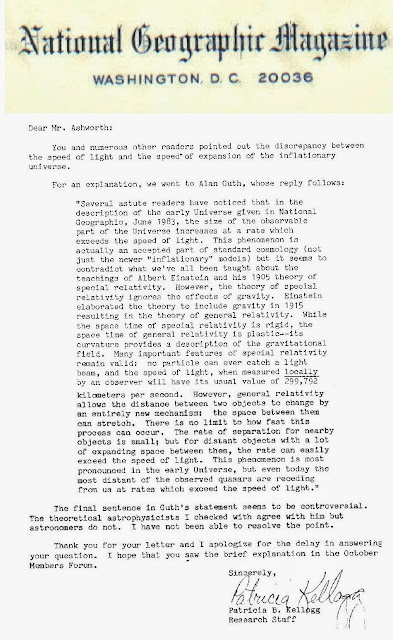 Posted by Theslowlane Robert Ashworth at 2:11 AM 259 comments:

It would be hard to get Russia out of Crimea as I think the majority of Crimean s' welcome them. Also it's former Soviet Union territory. Economic sanctions might be good, but to what end? Also it would be hard to get the many countries of Europe, dependent on Russian gas, on board. I mostly favor economic sanctions, but have some reservation as to what outcome we can realistically expect the Russians to do. Seems like they are not likely to let go of Crimea for quite a while at least.

A more likely scenario would be to push for better human rights within Russia which would also mean better treatment of minority groups in Crimea such as the Tartars and Ukrainians. Remember Russia's treatment of gay people as kind of a "canary in the coal mine" foretelling treatment of minority people's within regions under Russian rule.

The west can try to bolster Ukraine's economy and use it as an example of good governance as well as economics. Yesterday, I heard a good interview on Diane Rehm Show about this situation. Former US ambassador to Russia, Jack Matlock actually hinted, in this roundtable discussion, that Ukraine might be better off without trying to hang onto Crimea with it's Russian majority. We could push for better economy in Ukraine. I hear things are going quite well in Poland. Ukraine can be another example, like Poland of how to do things right.

Pushing for human rights is a good idea. The international community has a stake in what goes on within a sovereign country. For instance, neighbors have gotten stuck with floods of refugees from the appalling situation in Syria. I hear that refugees are 1/3 of Jordan's population these days. Jordan, some other countries and the international aid agencies are being overwhelmed.

Pushing for human rights, within sovereign nations, is important, but it seems very hard to convince the Russians to withdraw from Crimea. Maybe in the long run, some sort of international peace keeping deal can be worked out and continued pressure within organizations, such as the Organization for Security and Cooperation in Europe, of which the Russians, Europeans, US and many other countries are members.
Posted by Theslowlane Robert Ashworth at 5:57 PM 1 comment: