In 2016, I predicted Canada might close it's border, but not this circumstance

Before Trump was elected, I remember jokingly saying, "if Trump gets elected, it will be Canada that builds a wall." Quite a few of my friends were saying that they would move to Canada. I thought that Canada immigration would restrict such a sudden influx of population.

Fast forward to now. The Canadian border is closed to non essential travel. It's been closed for months. Kind of like my joking prediction, but not exactly, of course. I didn't predict a pandemic.
Posted by Theslowlane Robert Ashworth at 10:54 AM No comments:

I'm hearing it said quite a few times that the phrase "defund the police" isn't a good strategy. Reform the police is better. Reforming the whole economy, not just the police in my opinion.

I also hear that suburban women are an important swing voter group. Crime is still a big worry. Given that, Trump now has an ad out about life after defunding police. When you call 911, you get voicemail. If it's a rape, press 1, a murder press two and so forth. Also a long response time.

There's an old phrase that goes, "how is your message going to play in Peoria." I guess that means Peoria, Illinois. Suburban women are an important part of the electorate.
Posted by Theslowlane Robert Ashworth at 10:56 AM No comments:

This graphic, that is said to be from the National Museum of African American History and Culture, has got me thinking about how I, personally, fit into what is considered mainstream society.

Admittedly, I'm white, but I got to thinking about how I fit, or don't totally fit, what's thought of as mainstream.

See below graphic, more of my thoughts.

Here's a few things excerpted from this graphic as related to my personal experiences.

I'm gay. I'm also not personally into the committed "two person style" relationship idea. It's sometimes thought of as a middle class model with white picket fence and all.

I basically believe science, but I was never that good at math. I'm more into speculative, creative thinking, but I avoid claiming that my hunches are, necessarily, scientific fact. I defer to the scientists.

I tend to believe the scientists tho I may not have the credentials to make my living that way.

I'm open, at least, to ideas, such as from religion, that aren't necessary always sticking to scientific evidence. There is a lot we don't know and I like to entertain speculation at least.

I'm not really into that. I prefer part time work. I think I'm more noted for what I do on vacation (bike touring) than what I do at work.

My life isn't about striving for more money, but I am fortunate in many ways. I have no family to support (back to my ideas about relationships), my health is good, I don't own a car (or better yet a car doesn't own me), my rent has been affordable and the community I am in values more than just money.

At times, it can seem like a lonely course, but, in Bellingham, there are a lot of people who seem to value their non paid interests more than their jobs.

I am seldom in situations where I have to show up right on time. I have a lot of free time and follow serendipity quite often; like when seeing someone unexpectedly in the park and then taking the time for an hour long, unplanned for conversation.

I often don't have goals.

I tend to think the system favors property owners.

I tend to avoid competition.

I tend to avoid conflict and I am polite, but I do often talk about my personal life.

I'm posting this as I contemplate how society, itself, has to stretch and change to accommodate variety. This includes some of our deep assumptions about what's normal and even what's logical.

I don't necessarily think society is evil. I buy a lot of it, but there are a lot of things I don't buy, so to speak. Society needs to be able to accept a wide range of skills. For instance not everyone is a technocrat. Can people still afford a place to live? I often find that marginalized folks, even the homeless have interesting stories to tell and things to offer.

I found this graphic in this article. Article was interesting also, but I tried to follow the link to what I thought was where the graphic came from. Couldn't find the graphic on quickly scanning a few pages.

I think article relates to how many people, of minority background, do measure up in our society and it is kind of a put down of the successful minority folks to gloss over this, as if all minority folks are destine to being the victims.

I see that point, but I also see some room for criticism of society as a whole. Assumptions about what the good life and the proper goals for life are.
Posted by Theslowlane Robert Ashworth at 2:26 PM No comments:

Could I become a mini version of Neil Degrasse Tyson?

There is an interesting tool on the Worksource Washington website that works like an automated career counselor. One fills out questions about interests, likes and dislikes. The system finds occupations that might be a good fit.

Toward the top of the list that I got, based on my aptitudes, was "Astronomer." Yes, I love astronomy. The choices were either research or teaching. I thought, maybe tutoring?

I could be a miniature version of Neil Degrasse Tyson; that famous media personality. I do like to talk about astronomy. I have a sense of humor and I seem to get along well with people. Folks say my science is accurate.

How about an audience of 1 to maybe 100? I've been doing that all along anyway. Not just discussing astronomy, but other topics that interest me. Maybe Facebook should pay us.

Oh well, I have less to worry about as I'm eligible for retirement. Still, there are always possibilities to explore.
Posted by Theslowlane Robert Ashworth at 3:26 PM No comments: 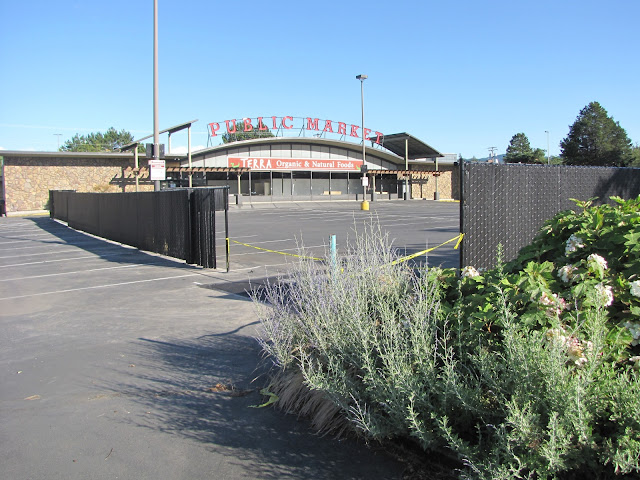 An empty market becoming Bellingham's temporary shelter for our many homeless people. Distancing during the corona virus pandemic. There's more need for this than a glut of retail space as people shop online. Shelter moving down the street from it's former location in Bellingham High School.

Adapting to the virus could help society learn to better address climate change.
Posted by Theslowlane Robert Ashworth at 11:27 AM No comments:

Would a carbon tax be like the virus, mostly the good side effects of the virus without the bad deaths and illness?

Economic downturn, due to the virus, has reduced greenhouse gas emissions, but it's still not enough reduction for us to reach climate stabilization goals.

Good effects from a carbon tax that could be similar to the good side effects of the virus are things like this. More telecommuting. If fossil fuel were to be more expensive, there would less commuting and more people able to work from home. The virus has had a similar effect.

Another effect is, in my opinion, the benefits of a slower economy, or at least less rat race. Less time and energy devoted to just working and consuming.

A carbon tax would, most likely, create some short term drag on our economy. It's a tax. It would create some disruption. It wouldn't necessarily be as bad as this virus which has hit us; like it our not. A carbon tax could be suited more to our intent.

One of the big drawbacks of a carbon tax is the effect on lower income people; especially low income folks who have to commute a long ways to work and / or are dependent on energy intensive industries. Tourism, for instance.

Carbon taxes can be fairly regressive. That is part of the reason why they are difficult, politically.

There would be some bad side effects to a carbon tax. Nothing is perfect, but during the virus, we have done quite a bit to try and mitigate the effects of the downturn on lower income people. We have done things to protect the more vulnerable; generous unemployment benefits, payroll protection plans, various stimulus checks. We've been printing free money; so to speak.

Locally, here in Bellingham, we've even turned over one of our nice school buildings; Bellingham High School, to the homeless. This, due to the need to provide more spacing between people than the crowded mission house can provide. Said to reduce spread of the virus in our community. Shelter soon moving down the street to unused retail space.

The measures we would have to do to mitigate the downside effects of a carbon tax would, most likely, not have to be as drastic as for the virus.

The virus has been a bad thing and has killed lots of people, but it may offer us some lessons that are useful in reducing carbon emissions. The economic downturn has reduced pollution, but even this hasn't been enough to meet the need.

If and when we find cures and a vaccine for the virus, it isn't likely to go back to "business as usual." We still face the challenge of climate change. Solutions, like carbon taxes, might be similar to the virus in some ways, but hopefully they can be more tame and controllable.
Posted by Theslowlane Robert Ashworth at 6:19 PM No comments: