Detecting planets around other stars is an amazing accomplishment 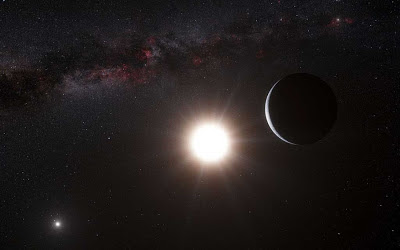 Humans can do some wonderful things, like detecting the slight movement of a star that's 4.3 light years from Earth using an incredibly refined spectrograph called HARPS. According to an article in Astronomy Magazine, the star named Alpha Centauri B has an ever so slight wobble in it's position. This back and forth movement is no more than 20 inches (51 centimeters) per second! That's about the speed of a baby crawling. Amazing they can detect it at all from a distance of 4.3 light years. That wobble is what leads scientists to say that they've discovered a planet around Alpha Centauri B. The planet orbiting that star has a gravitational tug which can be detected in shifting spectral lines and these shifts can be by the HARPS Spectrograph which is located at a large telescope in Chile.

Amazing, when one stops to think about it. What our instruments can do.

Mainstream media has given this discovery some coverage because the Alpha Centauri star system is the nearest neighboring star to our sun. Yes, even in our nearest stellar neighbor resides a planet. On Facebook, people have shared science fiction graphics, from the 1950s, about alien civilizations on Alpha Centauri.

In reality, this planet wouldn't be like Earth, according to the scientists. It's orbiting too close to the star so it would be blazing hot. Other planets may reside in that star system which could be more friendly to Earth style living, but if they do exist, they await further research.

Two of the most common techniques for detecting extrasolar planets are gaining momentum as time goes on. Sensing the wobble of spectral lines (as was done in this case) is called the Radial Velocity Method.

The other big contender for planet discovery is what's in use by the famous Kepler Satellite. That's the satellite which stares constantly at a patch of stars looking for an ever so slight dimming in the light from any one of the stars. That dimming, or wink, is likely to be the result of a planet which is orbiting the star going in front of the star as seen from Earth thus blocking part of the light. Kepler is staring at around 160,000 stars for telltale signs of these tiny winks. It has discovered many planets so far. Even though we haven't found alien civilizations yet, it's still amazing that we can detect evidence for planets around distant stars at all. We can't actually see these planets, but planets do have an ever so slight effect on the starlight from their stars. The fact that we can extrapolate these sort of things at all is a great testimony to our mastery of technology. Human achievement at it's finest.

Image and below description reprinted from Astronomy Magazine.

This artist’s impression shows the planet orbiting the star Alpha Centauri B, a member of the triple star system that is the closest to Earth. Alpha Centauri B is the most brilliant object in the sky, and the other dazzling object is Alpha Centauri A. Our own Sun is visible to the upper right. The tiny signal of the planet was found with the HARPS spectrograph on the 3.6-meter telescope at ESO’s La Silla Observatory in Chile. // Credit: ESO/L. Calçada/N. Risinger.
Posted by Theslowlane Robert Ashworth at 6:17 PM