Say good by to agriculture in California's Central Valley? 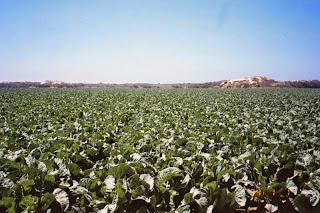 The word collapse may be overused these days, but I think we could soon see the collapse of agriculture in California's drought stricken Central Valley. With successive years of low snow pack in the Sierra, farmers are now turning to wells, from limited groundwater, for irrigation of crops in the Central Valley. If this runs out and normal snow pack doesn't come back in the near future, imagine the Central Valley around Sacramento and Fresno being more like the Mohave Desert. Of course this is only one possible scenario, more normal rain and temperature patterns may return as early as next year.

I wouldn't say that folks who are naively still banking on Californian agriculture would be "science deniers." The actual science is still not real clear about what will happen over, say, the next 25 years.

On the other hand, there are some really alarming climate models coming out from the science about that region in the second half of the 21st century.

Vertical farms, where crops are grown hydroponically with less water, can be done and desalinization of water from Pacific Ocean can be done. Problem is economics. In the near future, at least, it seems more likely that the oranges and so forth that we currently get from California would be shipped in from other parts of the world.

California lettuce field, near Guadalupe, that I passed on one of my bicycle trips down the coast. I'm not sure if this coastal agricultural area is dependent on irrigation water from Sierra snow pack. Some coastal areas use local rivers, like the Salinas River, fed by rainwater. I don't have my own picture of a Central Valley field.
Posted by Theslowlane Robert Ashworth at 4:07 PM