Planning for a career in radio, I wrote to some broadcasting schools during my junior year in high school. A fast lane into the field versus the more "scenic" route through college.

As brochures arrived, my sister, Lillian looked over the stack and noticed that several of those private schools boasted of faculty trained at Washington State University's school of communications. Her comment was, "why bother with these schools?" "Go to the source;" meaning WSU in Pullman.

Communications at WSU has a very high reputation across the country. Home of KWSU Radio and TV where my sister went to school toward the end of her college days. The WSU campus was next door to our childhood neighborhood. 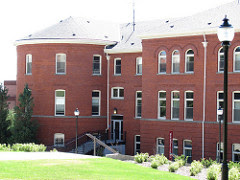 Interest in the fast lane of vocational training quickly dissolved to where I was making plans for WSU. Who could beat the Murrow program?

My mom still suggested living in the dorms, rather than at home, however. She valued that "going away for college" experience even if it could end up being dorms over looking our front yard. More likely she would have recommended dorms on the other side of campus tho. 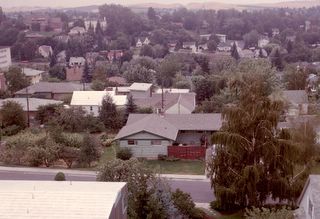 Image my brother Bill took from the dorm over looking our house in the mid 1960s when he worked on campus.

Spring break of my junior year, the family took a trip to Walla Walla where my other brother Jack was attending Whitman College. That summer, he was living in a tree house; so to speak. Jack was the caretaker of an estate for a woman named Mrs. Studebaker. Her family owned some local radio stations. If I remember correctly, the stations were KUJ in Walla Walla and KRLC in Lewiston, Idaho. 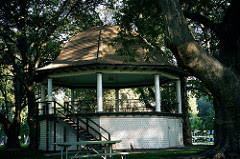 Bandstand in Pioneer Park, Walla Walla. Looks kind of like the Studebaker Estate.

We got invited into the "big house" for a cup of tea. Not the Walla Walla Penitentiary, but Mrs. Studebaker's main residence. Learning of my radio interest, she suggested I go to the heart of the matter. Follow the money. Get a start in advertising.

Planning on college at WSU, I also applied to what is now called Western Washington University in Bellingham. It was a backup strategy just in case WSU didn't accept my application. Western was my "plan B." It responded right away accepting my application. WSU remained silent.

My senior year, I also thought about doing an internship at WSU Communications. It would be for the second semester, but jumping in that quickly was kind of a scary prospect. I backed out of that plan for several reasons including wanting to stay at the high school for my entire senior year. It was a very special year in Pullman High School's new building. I didn't want to miss out. 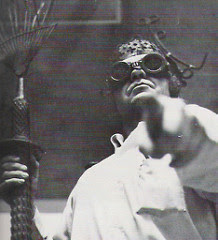 My sister Judith was a student at Fairhaven College; a division of Western in Bellingham. Ground zero for hippie culture. The thought of being among all those hippies; swimming in the campus pool and showering in the locker room was alluring. Pullman had its hippies as well, but not to the extent of Bellingham. Also the thought of going to WSU, was becoming more intimidating. It's a big school with a fairly rigorous reputation. Maybe I could start at Western, be among lots of sexy looking people, get my feet under me and then go back to WSU. Western was smaller and was starting to look more inviting. That thought started haunting me more and more. Meanwhile, the letter of acceptance from WSU had not arrived yet. Maybe I'd have to go to Western anyway. 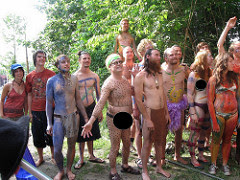 Still thinking about WSU, I joked with my mom that I might get to know the organist at our church, First Congregational in Pullman. Besides playing the organ, his main job was head of the WSU office for academic probation. Probation is what they put students on when their grades are too low. Confidence was never my greatest talent.

Pretty soon that letter arrived from WSU. Accepted, but by then the scale of my preferences was starting to tip real strongly toward Western and Bellingham. A few weeks later, I made the decision and enrolled at Western. Figured it would be a good start for my Freshman year and then I could come back to Pullman and tackle Communications at WSU.

My thinking had evolved quite a bit. Having nervous problems through childhood, I first thought that staying in Pullman would be easier than going away for college. I even mentioned that on my application to WSU. Later on, my thinking evolved to the idea that it might be easier to go away for college, rather than staying in Pullman haunted by childhood memories. My childhood was pretty good, but I have suffered from an anxiety condition all my life. I was beginning to think that a move to Bellingham could be a new beginning.

After the summer of 1973, My parents brought me across the state to start fall quarter of my freshman year. Checked into the dorm. Being from a college oriented family, I had a fairly good understanding of campus life.

I changed my name upon coming to Bellingham. Not officially, tho. My official name has always been Robert, but in Pullman, people called me Bobby. I also went by Bob. Being a late bloomer, the Bobby name stuck among classmates clear through high school. In Bellingham, I'd start using the name Robert. It was getting to where I didn't like the name Bobby. 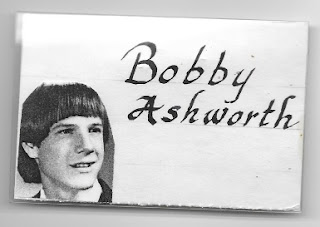 Name tag from a reunion with senior picture from the Annual.

More recently, I enjoy hearing people call me Bobby at High School reunions. It's fun to come back to the reunions after, say 40 years. I've come back by bicycle. 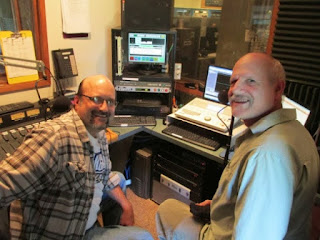 After bicycling to Pullman from Bellingham for my my 40th high school reunion, I was a guest on the radio in Bellingham. I was on a show called "The Joe Show" that used to be aired on KBAI, 930 on the AM dial. Progressive Talk. More recently that station has converted to a music format.

When it came time to register for my first freshman year classes, there was a glitch. Administration placed me in a program called Vicoed since I had shown interest in communications. This happened even though I had written on the form "communications, but not Vicoed." Vicoed dealt more with classroom media, film projectors and so forth for Ed majors. Rather than being able to choose classes, Vicoed students had a prescribed program.

My assigned advisor was a somewhat tired looking man named Dr. Shwam; chairman of the Vicoed program. His first comments were, "if you want to do communications at WSU, you should go there." "Western would just be a waste of time." "You should go back to Pullman so you can get in on the ground floor."

Well, I was at Western. It was a bit late to heed that advise.

I went to the class registration center and told the entry clerk that they had put me in the wrong cue. She said, "you can go on in and register for your classes now." "You don't have to wait to go in with the Vicoed students."

Back then, registration was done with stacks of cards. Computers were employed, but the card stacks were submitted to administration for computer processing. You'd get your class schedule in a day or two. Registration was a big scramble on the basketball floor of Carver Gym. 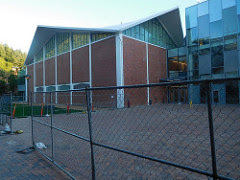 Part of Carver Gym during a recent remodel. Image taken 2017.

The schedule turned out okay. My sister Lillian commented that I'd learned the ropes pretty fast figuring out how to get out of Vicoed.

A few days after class started, a dorm mate ask me, "when does college start?" I said, "have you registered for classes yet?" He said, "Register?" I suggested he go to the administration and explain his situation.

I wouldn't be surprised if he did okay after that.

I tried to be easy on myself taking mostly electives my first quarter. One of the first classes I picked was introduction astronomy. Turns out I got onto something called the "College President's List" my first quarter due to high grades. College started with a bang, but my grades degraded, so to speak, after that.

December of 1973 brought the end of fall quarter and my 19th birthday. Lillian, arranged a great birthday gift. A personal tour of KOMO Broadcasting; home of KOMO TV and Radio. Tour was led by my sister's friend and well known newscaster Bill Brubaker. It was very interesting, but afterwards I had a strange feeling. Did I really want to work in a place like that? KOMO seemed a bit like an ant hill to me. Start at the bottom, not much room for creativity until one rises pretty high in the ranks. Lots of stress and deadlines.

As I walked back to meetup with Lillian again, I thought that maybe broadcasting wasn't right for me. What should I do? City planning came to mind as well as other creative endeavors. A lot of broadcasting does come off the national networks so opportunities for creative work are limited at the local level. 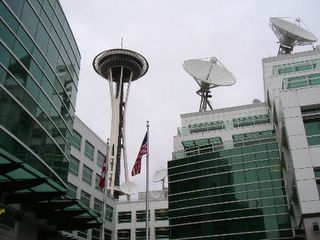 Back then, KOMO was in a fairly bland looking building. More recently the studios moved to Fisher Plaza pictured in this 2005 image.

Memories of an earlier tour of Spokane's KHQ comes to mind. Coming home from Spokane, one summer during high school, I was with my dad. We stopped by the old KHQ Radio TV building on Regal Street. One of the station's administrative staff greeted us at the door and ask what specialty I was planning to go into. News, advertising, engineering? 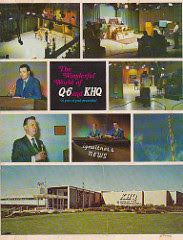 KHQ brochure from around 1972.

I hesitated as I wasn't sure. Basically I just wanted a general overview, but didn't think to say that in time. My dad beat me to the answer and said, "he wants to be the company president." The person leading the tour was a bit taken aback, but the tour was interesting anyway.

Eventually, geography became my major as it was the subject of most of my elective classes. I took a scenic route through college and graduated from Western in spring of 1978.

Since then, my life has had a low footprint for the most part. Being afraid to drive, my travels have been mostly by bicycle. I've bicycled across the America. As for a career of self expression in the media, I'm fairly prolific on the web and Facebook. I'm at www.theslowlane.com