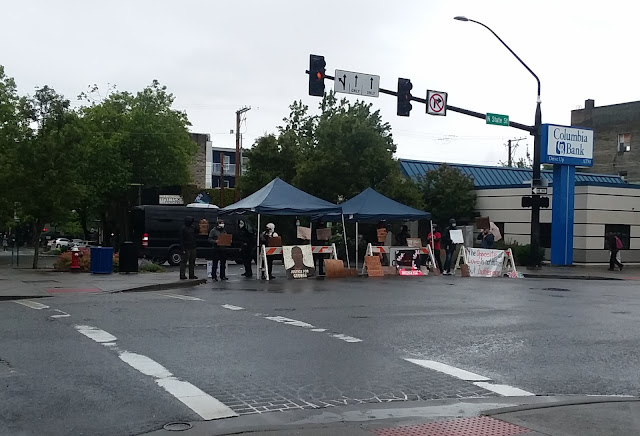 Holly Street was blockaded for a protest as I passed through downtown on June 15 2020.

I know that there are bad police, but for the most part, the police do a difficult and necessary job. Too bad that the police have become a punching bag for people's frustrations against society. Racism, income inequality, lack of affordable housing and so forth. The job of police is to protect life, property and public safety. To some extent, this does mean protecting the status quo.

Given politics of the last few years, there is a lot to be upset about. A president who didn't receive the popular vote, but was elected due to how it played out in the Electoral College. This has happened twice in recent history. George Bush II in 2000 and Donald Trump in 2016.

Then you have Senator Mitch McConnell's refusal to even hold the hearings for Obama's Supreme Court nominee and today's efforts, by Republicans, to pack the courts with their candidates.

People are rising up against a government that seems much less representative of the people; especially the majority of people who live in cities.

The urban rural divide plays a role here as well with rural values still dominating at the federal level. The police are symbolic of maintaining that status quo as they strive to maintain order.

Some of these occupations remind me of the Occupy Wall Street days.

Seems like there are two major threads in these protests. One is the protest, itself and another thread is an attempt to set up an alternative to mainstream society. The occupations often bring music, dance and social interaction. An alternative to the regular economy. Like being off the grid.

It's kind of like trying to reinvent the wheel. On a rainy day (yesterday was a very rainy day), it's a reminder that mainstream society does have it's creature comforts.

Society does still evolve. The recent Supreme Court decision for gay rights is an example.

It does seem like gay rights keeps moving forward while other things, such as fair distribution of wealth or reduction of the carbon footprint, lag behind. Racism still persists as it is often exacerbated by income inequality, lack of affordable housing and things like gentrification.
Posted by Theslowlane Robert Ashworth at 10:45 AM