Arecibo: A use for intelligent and educated minds.

Article with a video of Arecibo Telescope's collapse.

Hopefully they can rebuild and hopefully basic scientific research can be a priority. It's science that's bringing us the vaccine; at warp speed.

Arecibo has also been a source of employment on the island of Puerto Rico. A use for intelligent and educated minds.

I got to thinking that people often say education is an important priority of society. One sometimes wonders what education is for given our lives and jobs after our school years.

That's something that scientific research provides. Employment for the mind. Learning should be a lifelong pursuit. It can also be a way to lift up people in troubled parts of the world.

I still think, maybe they could restore the dish and not have to replace the old, complex antenna structure that was suspended over the dish. Couldn't they use drone technology to place the secondary antennas? I wonder how that's done at the FAST Telescope in China? That's the world's largest radio dish. Even larger than USA's Arecibo was.

Too bad about China's human rights violations, but it is an upcoming power in science. 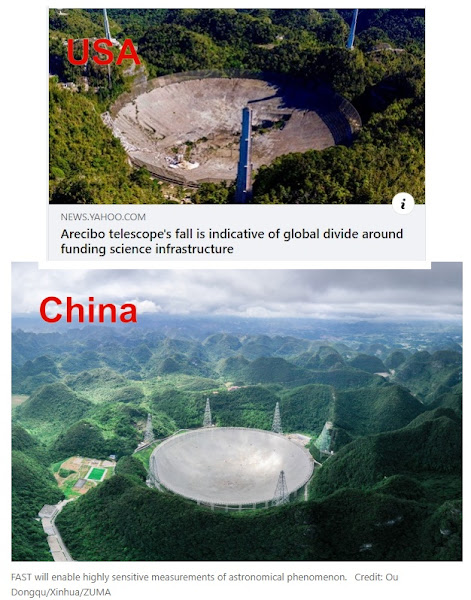 On the human rights front, I think improvements can come incrementally. Often when they are pushed too fast, they bring pushback that makes things even worse. Incremental change means pusing for improvements, then resting a bit to consolodate gains and then pushing a bit more. A long term strategy.
Posted by Theslowlane Robert Ashworth at 3:58 PM