I think that more than just the Reagan Revolution lead to wage stagnation, but that was a factor. 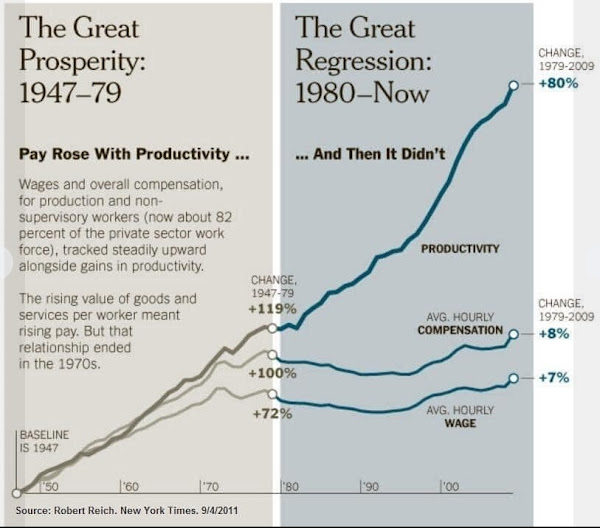 A pretty telling graph. About the time of the Reagan Revolution, wage growth, that had happened since WWII, stalled. I remember voting for Carter instead of Reagan in that election.

Still, I also remember thinking that part of the economic stall, that was starting at that time, had to do with environmental limits on middle class American consumption. That was the era of the energy crisis and other limits on land development, waste disposal, mining, logging and so forth.

Another factor is that world economic growth has continued in spite of the stall in USA wage growth. Much of that has to due with people rising out of poverty in places like China. USA is less "top dog" in the world.

Much of the growth in climate change has to do with the world starting to catch up with the way things were being done in USA.

A shift away from US based manufacturing has depressed wages, but it has also led to an abundance of inexpensive goods for the American consumer market.

As I remember, back in the days of the stronger middle class, products, such as shoes and electronics, were quite expensive relative to other things that people took for granted; like being able to afford health insurance and a place to live.

No doubt the Reagan revolution added significantly to income inequality. Much of the foundations for that revolution were laid in the 1970s and are still in effect today. Tax cuts that have mostly helped the already wealthy and upper middle class.

Case in point is California's Proposition 13. It passed in the 1970s to keep property taxes low. This was seen as a "shot heard around the world" leading to the Reagan Revolution.

An unexpected consequence of Prop 13 was that during the massive rise in property values, over the next few decades, home values went up into the millions of dollars while property taxes could not keep pace. Services, such as schools, suffered and some of that burden of taxes was shifted to other taxes as well.

From what I understand, in California, long term homeowners are grandfathered in with low taxes, but new residents, first time homebuyers and renters are priced out of the market.

These kinds of problems happen in other states as well, but California is a glaring example making housing, for many folks, unaffordable.

That's one of the big barriers leading to the demise of the middle class.

I never supported Reagan, but even if Democrats had held majorities during that period, I doubt middle class wage growth would have continued on that same postwar trek.

There are a lot of things "baked into the cake" that led to this change, including things like increased building costs related to concern about the environment.

In many ways, we have been spoiled by our economy. We expect so much in terms of cheap products, low taxes and a clean environment. Given the turn back to the right, politically, and the persistence of "traditional values," we have not adapted well to the changing needs for a more sustainable economy.

Since then, things haven't changed enough for an environmentally sustainable economy and that world we were building is becoming increasingly hard to enter and increasingly dysfunctional.

We need to build a different type of world for the future.
Posted by Theslowlane Robert Ashworth at 12:22 PM