Maybe Ferndale aluminum refinery should include in it's restart plan the ability to mothball the plant temporarily during periods of low aluminum prices. 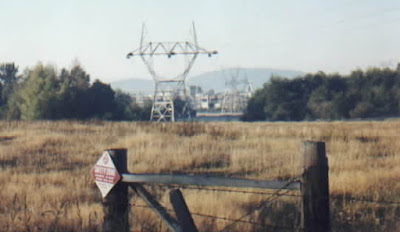 Price of aluminum is going up again and there is talk of restarting the mothballed aluminum refinery near Ferndale. They say it could bring back hundreds of family wage jobs. The state has tossed in some money to help, if the plant can restart.

Main issue now is negotiating a new electric power contract with BPA. Aluminum refining uses lots of power and usually gets it at a cheap, bulk rate.

I got to thinking that the plant may only be able to operate while aluminum prices are high. If the price goes down, the plant could have to be mothballed again. As they negotiate the power contract, they might be hoping to set a lower power cost as they take periods of lower aluminum price into account.

Instead, maybe they could agree to a higher power price, assuming the plant mothballs again, if aluminum prices drop.

I realize I don't know that much about running such a plant and power contracts. People might say I don't know what I am talking about, but this is my blog. I can toss out an idea for what it's worth.

A somewhat higher cost of electricity could be seen as being like buying power at the "green power rate." Sometimes rate payers, like the city of Bellingham, voluntarily agree to pay a bit more for so called "green power." This puts money toward green sources, such as solar and wind, which can be a bit more expensive.

I know that the refinery would still get a bulk rate, cheaper than smaller users, like the city government of Bellingham, but this concept could be considered as they negotiate the deal. It might mean the plant has to operate with a business plan that takes mothballing into account, during times of low aluminum prices.

Due to world economics and climate change, it seems like things need to be more flexible. Plants closing and reopening, given conditions.

That would also imply more flexible housing, in this area, for workers who would have to come and go with the price of aluminum.

This might be good for some personalities, who like change. Americans have been somewhat of a nomadic people, in past decades, but high housing costs and low vacancy rates have been making it harder for people to follow their jobs and dreams during more recent times.

Sometimes, when a mill closes and jobs end temporarily, folks can take advantage of those times for career change, vacations, schooling, or whatever.

Back in the 1980s, it seemed like corporations transferred people a lot. Maybe, due to less mobility, these days, this happens less often now?

The Pizza Place, I worked at right out of college, had a reputation for transferring the managers to Burian, WA.; for some reason. Moving around can be bad for establishing roots in a community, but some people like it. Folks often look forward to change. A new location and a new adventure.

At a time when so many folks are hanging onto old versions of the American Dream; hanging on with fear, we might need to plan for more flexibility; especially due to things like climate change.
Posted by Theslowlane Robert Ashworth at 11:11 PM