How about that water at lots of other camps, too many to mention?

A few emails per day are still getting mostly to my spam filter about the water at Camp Lejeune.

It just donned on me that I had bad water at a childhood camp, that I wish not to mention. It's a good camp that's still functioning today with cleaner water. I'd hate to start a cascade of lawsuits against that lovely place.

They used to get water from a big lake that was fed by Northern Idaho mines. Even toward the end of my childhood, they were (if I remember correctly) switching the water source to some springs instead of an intake pipe from the lake.

I do remember that the water had a strange taste. A strange enough taste for harm, to this day, of my appetite for pancakes; especially pancakes made from a box mix.

Back then, they said the slightly metallic taste was due to mining around the lake.

People seemed less worried and lawsuit happy back in the "good old days." I think society could learn some from that past patience. I'm sure some lawsuites are legitimate, but we do live in a society that seems to be eating itself alive and us along with it.

Long after that camp put in their spring fed water system, most of the mines were closed and there was a lot of cleanup. Yes, there might have been some legal action, in that mining area, which led to innovative solutions. Legal action, or just legislation, I don't know the whole story.

It turns out that an abandoned rail line was turned into this marvelous bike path. It crosses the entire Idaho Panhandle.

The path was said to be an inexpensive way to pave (encapsulate) toxic dust along an old railroad. Such an ingenious solution to (maybe I shouldn't say this) "kill two birds with one stone."

That old railroad, in Idaho, is one of the best bicycle roads I have been on. 72 miles long as it passes through towns and wonderful scenery along the way. 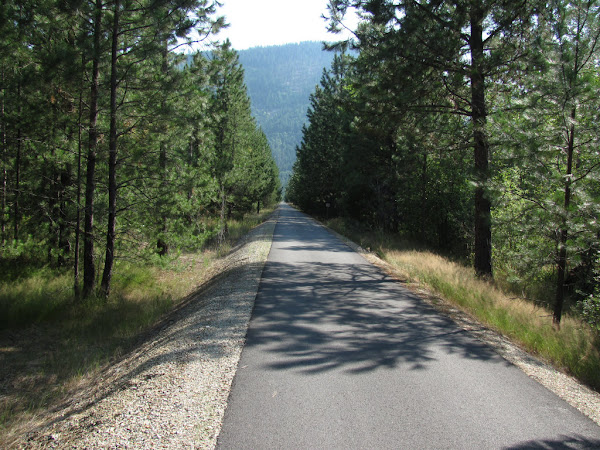 Okay, I'll say this much about the location. The trail is called "Trail of the Couer d' Alenes" which goes through watershed areas that feed into Lake Couer d' Alene.

More of my pictures of that great solution for both bicycling and water quality.
Posted by Theslowlane Robert Ashworth at 6:46 PM