Grassroots and Independent Media Conference here in Bellingham. My Impressions. 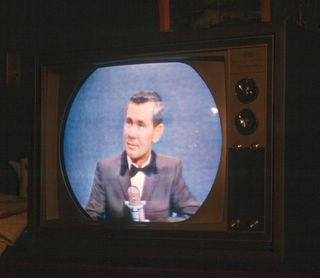 By co-incidence my brother just finished sending a CD of scans from his old slides. Slides taken when I was in grade school. It includes our 1964 TV. An RCA Victor. Color! but, still used vacuum tubes.

Choices were limited back then (the 1960s). The TV only got 3 commercial and 1 educational channel.

Radio wasn't much better in those days. A lot of repetitive music formats. Every place had it's country and western station, rock station and right wing religious station. Back then I wondered why there wasn't any left wing religious stuff on the air?

There seems to be a lot more news, talk and public affairs radio today.

I just happened upon this conference by accident. Someone handed me a piece of paper with it's web address.

Yes, I think there is more "diversity of voices" being expressed now, in spite of corporations swallowing one another. In spite of the Bush Presidency.

"Finally a view from the left," as it advertises itself.

Air America is quite successful, so I hear. Move over Rush Limbaugh.

Conference was free and located in buildings not far from where I live. One of the workshops was in a place that is now "the education building" for a credit union.

I remember when that spot was called " The Cattle Men's Drive In."

No need to go to a fancy resort. Just use buildings nearby. Quite a bit of space available on weekends.

Experts came from Seattle and around town.

The conference was partially sponsored by Whatcom Peace and Justice Center. Much of it funded by a generous donation from Dudley Foundation.

At one workshop, low power FM radio was discussed.

Back in 1978 low power was basically killed with new FCC rules. It was said that the public broadcasting system (NPR, PBS) lobbied Congress to wipe out low power as they feared interference. Possibly feared competition as well.

Now the idea is back in this age of rapidly changing media.

Bellingham's Museum of Radio and Electricity has recently opened up a low power FM station and another one is being planned by a community out in Van Zandt, WA.

There still aren't that many low power opportunities as the FM dial is chock full of stations, in urban areas at least. The FCC only opens "windows of opportunity" for low power licences rarely, but the mechanism and dream is alive.

Meanwhile, broadcasting on the Internet may reach more people anyway.

There is basically no FCC on the Internet and nearly an infinite number of channels.

More broadcasting channels will also be opened up with digital radio. That will be over the air.

I insert this information here, but it wasn't discussed at any of the three workshops I was at.

KUOW is that big news and talk NPR station in Seattle. It now has two separate program feeds on the www.kuow.org web site.

Twice the number of programs. Giving more voices a chance.

Some people may fear, "just more of same voices."

KUOW is gearing up for the broadcasting of two feeds in their "on air" signal as well. One will need a special radio to get the second feed.

It's made possible with digital radio.

No, I think that switch is just a "tone attenuator." My old radio doesn't even get FM.

Illegal, gorilla broadcasting came up as one of the topics, in another workshop.

I wonder why anyone would bother anymore. The Internet is so open, but there still is that lure of a confrontational act; especially among the anti WTO crowd.

I wonder if gorilla broadcasters can still reach an audience in this age of digital tuning?

Back when I was a kid, we had tuning dials on the radio. One could tune up and down the dial noticing when new stations appeared. Sometimes this distraction would change one's listening plans.

Now there's digital tuning. One just jumps to the station they wish to hear.

Scanning up the dial can still be done, but it's more cumbersome.

Can people find new signals outside the presets they have programmed into their dials?

It's called, "Lock in" your preconceived notions.

This is less of a problem on the Internet.

Even if there isn't much audience potential, gorilla radio might be harder for the FCC to catch these days, however.

Miniature equipment can be moved around town. Set a transmitter up and then take it down . . . before anyone can track it down.

Also the Internet can be used as a studio outlet. A legal studio outlet that others can patch over to illegal transmitters.

The studio can't really get busted if other folks pick up the program off the net and then transmit it to the air. The studio can just say, "I don't know those folks who were transmitting this." "What folks?"

On the other hand, bureaucracy is cumbersome. FCC's limited staff makes enforcement difficult, unless one is covering over another station's frequency; thus generating lots of complaints.

In heavily populated regions, like the Bellingham area, just about every frequency might be, at least, some station's "fringe service area."

Can CB band be used for community radio?

Being less of a rebel, I asked, "what about the use of CB and ham radio bands?" In the CB world lots of little transmitters are licensed legally.

"Can CB / or ham play a role in community radio?"

I have listened to CBers, on my shortwave, and they mostly seem like a boring lot. Just talking about their antennas all day. Some say CB is a dying art.

Can't these transmitters be used for more interesting content than just:

"Hey, Charlie, what's up, nothing much." "I'm running a dipole on the roof with a copper lead wire to the screw terminal in ..."

Is there a law stating that one can not hold an interesting conversation over CB?

There wasn't much familiarity with CB in the room. That's another generation, I guess. CB seems to be mostly of the World War II generation.

I haven't tried it yet. Maybe someday.

Conference on the web?

So much one can ponder and there was a lot to that conference I didn't even touch on. So many opportunities. Worlds at one's fingertips.

Last I checked, conference still has a web site. Workshops were videotaped and they say the content will eventually be on the web.
Posted by Theslowlane Robert Ashworth at 5:12 PM

I hope they put the info on the net, I'd love to see it.

Some comments about your blog entry:
Yeah, CB is a dying art. It used to be that everybody had one, now
I think I'm the only person I know that has one.

Ham radio is no good for guerilla radio. It has specific bandwidths, and most hammers are Republican. Need I say more.

The web is good distribution except for two problems: (1) only 40%
or so of US people have a high-speed connection. The other 60% would
get frustrated real fast; (2) getting the word out can be extremely difficult. The web is a *very* crowded place.

One of the best ways to do guerilla radio is the way I used to do it in XXXXX. I would make an audio CD of what I wanted to broadcast, and had my portable radio transmitter rigged up in my van. (Having a CB was a big help, people looked and saw the CB and thought I was just talking on that.) Then I would drive to the
Wal-Mart parking lot (it was a small town), and adjust my transmitter to the frequency of the most popular radio station in town. Then I would sit and read a book (or pretend to talk on the CB) while my transmitter broadcast for an hour or two. Yes, doing it that way could generate complaints to the FCC, but like you talked about in your blog, it's hard to pin something like that down.

Also, you should know that NPR is in bed with the radio corporations. Despite a lot of their "liberal" programming, they are against LPFM, among other things.

I haven't done any guerilla radio since I left XX, but I sure would
like to meet up with the people that put on that workshop you went to!

Yes the Internet is crowded, but search engines do a good job bringing up more than just main stream information sources.