Pedal With Your Politician in Bellingham, WA. 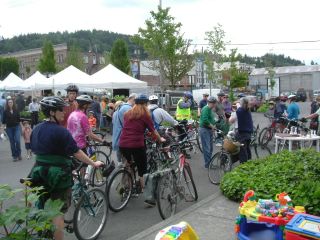 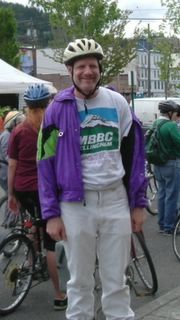 Someone snapped my picture at start of Pedal With Your Politician ride. May 14 2005.

It was a feeling of empowerment, today, as I participated in the fourth annual Pedal With Your Politician ride. Joining us were two county council members, Barbera Brenner and Seth Fleetwood. Also County executive Pete Kremen and city council women Louise Bjornson and Barbara Ryan.

Some cars stop to allow pedestrians across while others pull around the stopped car and barrel through.

The words "Fuck You!" were yelled from the window of a passing car while we were gathered along the road side.

Someone ask Ellen Barton, President of Mount Baker Bike Club, if she had arranged for that utterance also. She denied it and that event was chalked up to coincidence.

Farther down Cornwall, Ellen pointed out a turn lane in the middle of the street. Turn lanes are designed so cars do not have to slow down while someone makes a turn.

Problem is, this is in a school zone, she pointed out.

Do we want to facilitate fast moving traffic while also telling folks to slow down in a school zone?

The left hand doesn't always know what the right hand is doing.

Bellingham High School and Assumption Catholic Church are along Cornwall. Assumption also has a school.

Good words were said about another church along Cornwall Avenue.

They recently enlarged their building, but unlike many churches, chose to stay in the neighborhood.

There are several "mega churches" that have built on the outskirts of town where acres of parking is the goal.

A big church, that recently moved to the outskirts of town was jokingly called:

This reminds me of a trip I took to Wenatchee, one year, where there was something called "Bethesda Christian Center."

Closer to downtown there was an empty church building with a big sign that read,

"Church For Sale, Can Also Be Used As A Warehouse."

Bethesda's "mega church corporate power monster" was creating a vacuum, in that town, sucking parishioners from local churches. Neighborhood churches were going under.

Later, I heard Bethesda went belly up. Not sure why, tax fraud? or maybe infighting among the Congregation.

Last time I was bike touring through Wenatchee, I noticed the Bethesda campus looked like it had become a furniture factory.

Back here in Bellingham, one can also praise the Congregational Church, on Cornwall, for being open and affirming to gay and lesbian people.

Liberal Christianity and a good neighbor in our community.

I know I am off the topic of bike riding. Talking about all this church stuff. My mind doesn't do "compartmental thinking" very well.

It all relates to a kinder world.

Open and affirming, slowing down, not being such a mega corporate monster.

Calming down the rat race of life.

The opposite of that car which sped by yelling profanity.