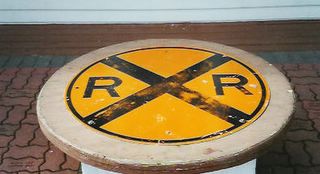 Was topic of today's "The Conversation" show on KUOW. Archived on their web site.

King County (where Seattle is) has the opportunity to buy 47 miles of railroad right of way from BNSF Railroad. This could be the basis of a marvelous trail liking east side suburbs from Snohomish all the way to Renton.

If the county doesn't buy the line, it is possible that the right of way could be broken up as parcels got sold out to different property owners. Keeping it all together would be great.

Currently, some of that corridor is used by Lake Washington Dinner Train; a tourist excursion ride. This use could coincide with a trail. There need not necessarily be a conflict between trail and dinner train use as was pointed out on the radio show.

Back in October of 2002, I remember writing an email to an agency called Sound Transit about that vary corridor. No, I don't live in King County, but listen to Seattle Politics on the radio.

My ear would fill up with talk about Sound Transit's problems developing new light rail corridors through Seattle. Land is expensive. The cost of new stations, tunnels, harsh. Still worth it, in my opinion, but many a talk show host; especially KIRO's Dori Monson, were fuming.

Then there would be an advertisement for . . . The Lake Washington Dinner Train. Ride from Woodenville to Renton.

My mind said, "Wait a minute." "There is an existing corridor." "Interstate 405, passing through the same area, is another congested freeway."

"Maybe the Dinner Train route could be used for light rail." "Take pressure off 405."

So I wrote an email. Wrote to Sound Transit and got back a very good and informative reply.

It had been studied, but population density, in that area, is still a bit too low for commuter train viability. There were also some problems with building track so trains could run two directions . Environmental impacts also. They recommended preserving the corridor, however.

Well, now spin the clock up to 2005 and the issue of preserving the corridor is making news.

Preserving the corridor as a trail.

That would be a lot easier and still take some local pressure off 405. Really, you can go a lot farther on a bicycle than some people think. I'll bet many of the 405 trips are under 10 miles.

Trail and rail possibilities, for that corridor, are significant.
Posted by Theslowlane Robert Ashworth at 9:05 PM

Brilliant idea! With I-405 the most congested road in the Puget Sound region and the cost of constructing light rail through pricy eastside neighborhoods astronomical, this ready made rail corridor would save tens of millions of dollars. I'll fire of letters to Sound Transit and local legislators too. Thanks for posting this. Brilliant!

it isn't brilliant. ythe concept has been studied ad naseum and has been found not suitable. the more un educated people that support these pipedreams just cost the rest of us money...