Iraq: The "You Break It You Buy It" War

When did Iraq get broken?

After the Gulf War of the early 1990s when we crushed the invasion of Kuwait but then abandoned the uprising against Saddam Hussein that followed, allowing him to slaughter thousands?

Today's Neocons might say Iraq was broken then, so we had a moral obligation to "buy" it with the second Iraq war. The war that was partially justified in terms of spreading "democracy."

Or, was Iraq broken in the 1970s and 80s when our oil purchases helped prop up Saddam Hussein's dictatorial powers?

If we follow a "you brake it, you buy it" philosophy, we're stuck buying for a long time, and buying we are. To the tune of over 600 billion dollars!

Original estimates were closer to $60 billion and a Bush administration official lost his job when he dared to suggest it might cost closer to $200 billion.

It's really closer to $600 billion and still counting when all the veterans benefits and so forth are factored in.

For that money, we could have almost built a large space colony with enough room for both a Palestinian state and Israel! Rather than everyone fighting over the old land, we could have built new land in space.

But, the American taxpayer is not really paying for this war anyway. Bush tax cuts are still in effect. The deficit is paying for it and that deficit is backed by international bankers. One wonders why bankers keep banking on American debt, but somehow they do. Maybe the whole world is broke. 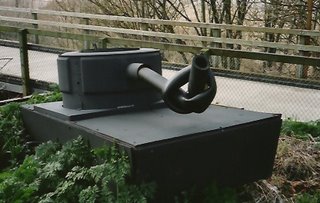 Someone called this anti war artist's sculpture a think tink. I saw it along a trail several years back.
Posted by Theslowlane Robert Ashworth at 5:15 PM