Arctic drilling protest in Bellingham, WA. with Ski to Sea twist. Protesting no snow for ski leg of race 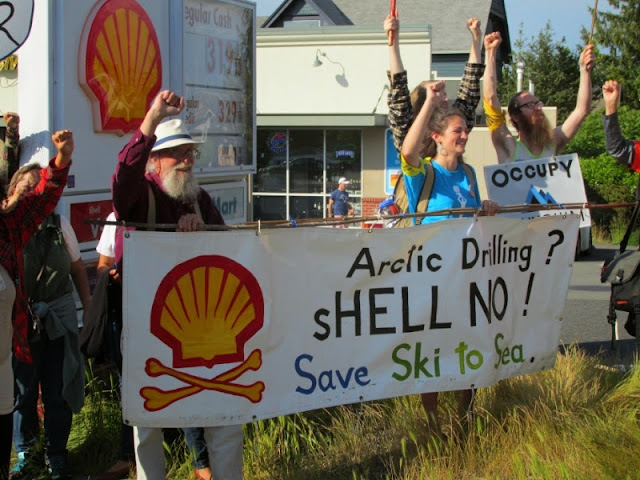 Taking protest against oil drilling in Arctic Ocean to the consumer end of the equation. The filling station on Holly Street.

Protest in Bellingham also addresses the lack of snow for our annual Ski to Sea Race. The ski leg of the relay has had to be cancelled in 2015, due to practically no snow on the course.

Protest started at the regular Friday vigil by Federal Building. Then it proceeded to Shell Station on Holly where it provided a good photo op to remind consumers of their role in the oil economy as well.

After that, it headed to Bellingham waterfront near a rig that is being readied in Bellingham Bay to help with the oil drilling.

Protest in Bellingham was on May 22 2015 after a similar protest in Seattle where hundreds of kayaks were seen around a drilling rig being worked on in Seattle harbor.

See link to my photos on Flickr.
Posted by Theslowlane Robert Ashworth at 7:12 PM

Update Sept 29 2015. Remember the SHellno controversy? Well, according to Bloomberg News and other media, Shell has decided to discontinue it's arctic drilling plan. Shell gave up for many reasons including the geology not being as lucrative as thought. Also low oil prices. The protests, most likely, played a role as well. President Obama got some flack for allowing this plan to go forward, but part of his compromise called for tight restrictions on operations in the arctic environment. Those restrictions also played a role in Shell's decision that arctic drilling just wasn't worth it. Shell spent 7 billion on this "dry hole, I guess" venture before deciding to cut it's losses and give up on the project. http://www.bloomberg.com/news/articles/2015-09-28/why-shell-quit-drilling-in-the-arctic