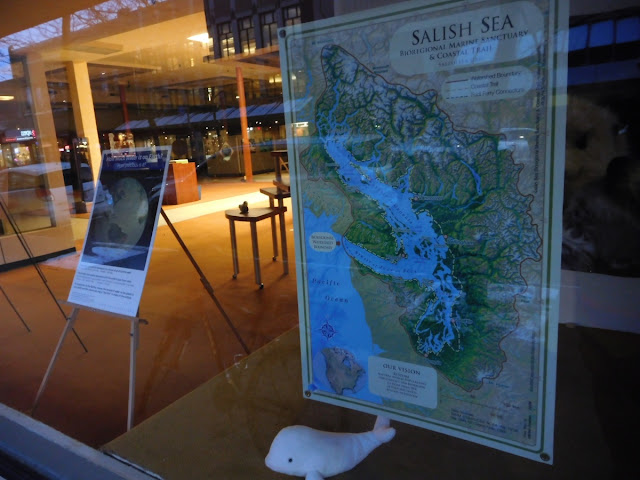 Conservatives, or at least people who think in the past might jokingly ask, "where's the Salish Sea?" Why not just call it Puget Sound?

I guess the Salish Sea is a term to describe what used to take 3 names to describe. Puget Sound, Georgia Strait and Strait of Juan De Fuca. Those 3 names are still used to describe the 3 main sections of Salish Sea. Salish Sea is kind of a bio region so the name highlights that. Also related to the native people's who have lived around its shores. Still part of the Pacific Ocean.

Window display in old Penny's Building on Cornwall Ave. A building that's been hard to find uses for, from what I can gather, since Penny's moved out in the late 1980s. Several years ago, I saw a real estate office in that large storefront. The desk and file cabinets were spread out quite a ways from one another to, seemingly, try and fill the big room.

There's lots of retail space in Bellingham, but a shortage of housing. More housing is, hopefully, being built around town to help reduce the shortage. People keep moving here to study or retire, but who's shopping? Lots of people are "doing." Doing things like art, music, discussions, but not stuff that necessarily pays in Bellingham. Pathways to what I see as a potential new culture of less consumption. Ways into a more sustainable future, but many of the old economic trappings remain.

On the shores of the Salish Sea. Culture, but can people afford to live here?
Posted by Theslowlane Robert Ashworth at 9:03 PM