All the fuss about 5G and what about the low frequencies?

Some people in my mostly liberal circle of friends are starting to talk about the threat of radiation from cellphone systems switching to 5G technology. I've done a bit of reading from establishment scientific circles so I tend to not be worried about that. I guess I've brushed that worry off pretty quickly. Low power microwave signals don't worry me, however there could be other consternation about 5G. Worry, itself is a health hazard.

There is the pressure and stress, felt here in USA, to keep up with China. Do we need to roll out our 5G technology before China establishes the standards, makes the equipment and runs most of the systems? What about human rights and privacy with China running things? Would there be the spying "backdoor" to "China Inc?" That's a worry.

Then one wonders what good is 5G? Do we have to always keep up with the Jones' and not let the grass grow under our wheels? That's always a worry when there is pressure to "move ahead."

What will 5G provide that we don't already have maybe too much of already? Does this mean folks can watch high definition television on mobile devices? Television while driving?

I know, there are lots of things I can't envision today; like who would have dreamed of search engines back in the 1950s? I'm a fan of progress, but I tend to shy away from pressure and rat race.

I hear that 5G is a higher frequency than today's cellphone systems. Higher frequency for more data, but one must be even closer to the service provider's antenna for it to work. Less fringe area service; from what I understand.

While thinking about these things, what about the lower frequencies? Microwave frequencies, used by cellphones, need line of sight between your device and the service provider. Yes, it does reflect off buildings and mountains, but it tends to work best with line of sight.

Lower frequencies, such as the old fashioned AM radio band, provide signals that can bend over hills. The signals travel long distance. I would guess less dropout spots.

When traveling along the road, AM radio can envelope one in a steady signal without the shadow areas of higher frequencies; such as with even the standard FM band. It can get to areas that don't have antennas nearby.

I know, lower frequencies provide lower bandwidth. Maybe they don't work for everything we want, these days. Still, these frequencies could be put to better use than just hearing Rush Limbaugh or Sean Hannity on the radio.

Yes, I'm putting in a dig to the deterioration of AM Radio as so many stations just carry the same network shows. Little choice beyond right wing talk. Too much redundancy on the AM radio dial. Redundancy on the FM dial as well.

Now I will digress and say some things about the current state of AM radio. AM does have more than just Rush Limbaugh. It has Country and Western music, oldies and repetitive traffic reports.

I've seen some articles hinting at suggestions for re-purposing the AM band. Use it for something else besides being locked up into almost useless radio stations (sorry Rush fans). Can't you folks listen to your national network on the internet? If all programs just come from the network, who needs local radio stations?

I forget, AM does have ethnic radio; Spanish speaking stations, Punjabi Radio.

There's Mexican music on the same radio dial as talk shows advocating the border wall. That's kind of neat, in a way. It's America. We can peacefully share the dial at least, but maybe not. The dial is still pretty crowded. There's too much redundancy on both AM and FM radio dials. Can't we open things up and allow more access to the lower end of the radio spectrum?

Yes, a lot of commercial stations seem to be just coasting. Like some property owners; quite a few stations are little more than just place holders on a dial that used to have listeners. It's time for some radical disruption.

There's also the shortwave bands. What they used to call "shortwave" back in the early days of radio. Not as short as the microwaves used by today's cellphones. These frequencies don't get much use today; from what I understand.

Shortwave was the frequencies used by international broadcast stations; Radio Moscow, BBC World Service and The Voice of America. On shortwave, one could send signals clear around the world.

During my childhood, I used to tune in stations from all over the world. Signals would bounce off a layer of ionized air that's high up in the sky. It's called the Ionosphere. The ionosphere can bounce signals clear across Oceans and continents. It was neat to be able to get signals from so far away, but often the programming was a bit boring. The bureaucratic utterances of governments. Radio Moscow was notorious. There is a lot more variety on the internet.

Ham operators would use these shortwave frequencies also. Home hobbyists could send their low power signals to another continent. Problem was, about all they would ever talk about was their antennas. It would be like listening all day to, "I'm running a T with 4 dipoles." "Then I got another over the garage." "I'm hooked to a number 5 trimmer coil." "The XYL (ham term for wife) doesn't like all the space that last installation is taking."

In the early 1990s, I visited a ham operator who was sending data packets from the internet to other operators using the airwaves. He could send photos to remote places in Africa, but it would take quite a while; like a real slow modem connection.

I think some of these frequencies are still useful for things like search and rescue. Use of the ionosphere can bounce communication to places like deep ravines in the mountains where there wouldn't be cell service or wifi. Not even line of sight to a satellite that's too low on the horizon.

AM signals can bounce off the ionosphere also; especially at night. When I was growing up, I used to tune in stations from all over the country, with just a regular AM radio. 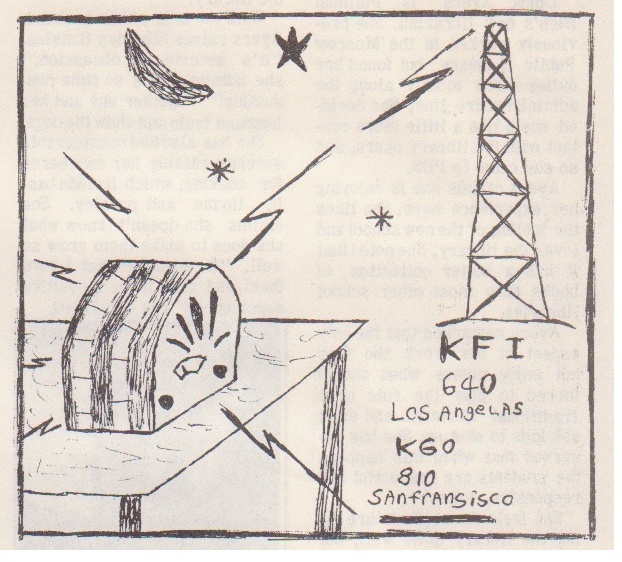 Could these lower frequencies be put to better use in today's digital age?

Rush Limbaugh fans may be among the many "rushing" to to get 5G going. It's part of keeping America on top. Like "Make America Great Again?" Don't let China beat us at this.

After commercial radio has pretty much clogged up and trashed so much of the AM band, it's good to ask, how will we plan to use 5G? Is this going to be another "vast wasteland;" like television was once described as? I am not against technological progress, however. I just like to think about these kind of questions. 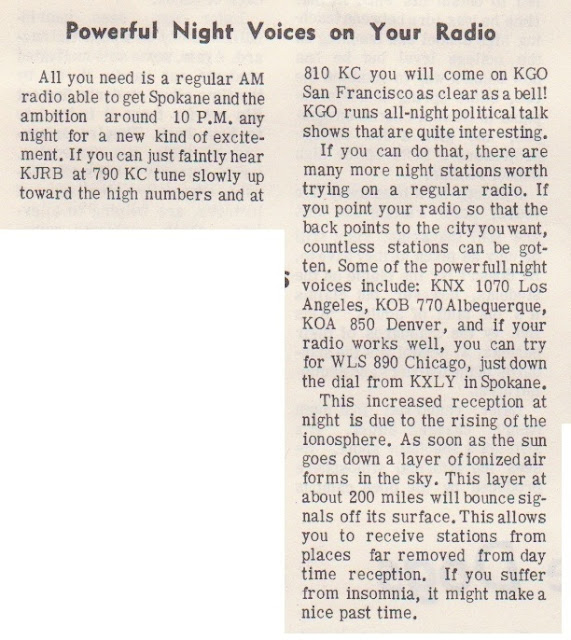 Article I wrote in the Pullman High School newspaper 1972 / 73 year about long distance AM radio.
Posted by Theslowlane Robert Ashworth at 12:50 PM

A recent conversation I had with Mark Allyn of Bellingham who volunteers at Spark Museum of Radio and Electricity brought out a good point about what was once called the shortwave bands; around 4 - 28 megacycles. Especially with AM modulation, the static is real bad on these bands. Bad in the places where most people spend their time. Anywhere near homes, businesses, power lines or phone lines, there is lots of static these days. Static coming from digital devices such as computers. Also from things like LED light bulbs. To get good reception on these bands, it's best to be, maybe at least 500 feet from this interference; a great inconvenience as even along roads there are usually power lines.

Before that, I realized that the AM radio band is almost never included in Smartphones. Some Smartphones can get FM without using the net, but not AM. FM is more static free, but the Smartphone, itself, creates enough static to make reception of AM difficult. Also AM antennas are usually a coil inside the radio which would be hard to cram a coil of this size into the Smartphone. FM reception often uses the lead wire to headsets as the antenna. This can be done for AM also, but it isn't as effective as the coil and a long wire AM antenna picks up lots of static.