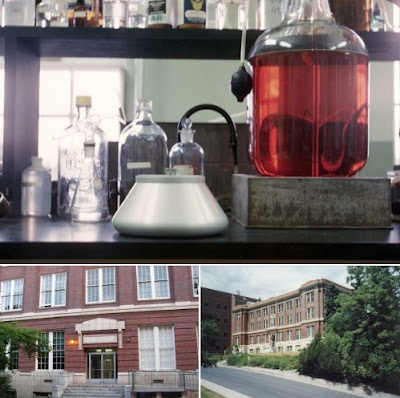 Here are some memories related to where my father worked. His lab at Troy Hall, Washington State University, Pullman.

That was until the last couple of years before his retirement when he moved to Clark Hall in the 1970's.

He was a science professor at Washington State University, in Pullman. Dairy science which dealt with the chemistry of milk. In a tradition of science, I remember him being quite modest. Not the type of person that would boast about things. Much of the time, his work seemed routine. Collecting the data, but not venturing into speculation. Big discoveries are more rare than day to day routine.

He did have a lot of patience and much of my own interest in science comes from my dad patiently answering the many questions I had growing up. Questions about biology, vitamins and so forth.

As a child following the moon landings, the work that my dad did seemed mundane to me. It was a job, like other jobs, I guess. Later on, in my life, I've learned more about his accomplishments in developing a process for making powdered milk and some other breakthroughs in dairy chemistry. He also taught students over the years.

In 1962, he won a big award called The Borden Award. It was given out at the American Dairy Science Association. It was at their convention which was held, that year, in College Park, MD.

For some reason, during that visit to the White House, I was more interested in a new kind of cereal box that was displayed in the breakfast line back at the cafeteria where we were staying.

I guess, back then, I didn't think the White House was that big of a deal. Imagine that today, with it's present occupant being Donald Trump. Being a small child, one might think that anyway. Kennedy was president back then.

When I got my first job, after college my dad was pleased tho I was a custodian. He was a bit worried that I might not be able to support myself with jobs being pretty hard to find. When I started working he was happy that I was able to find work. Status wasn't that important. Integrity is a value that we grew up with.

Top photo: The lab taken during 1960's by my brother Bill Ashworth. I think that big glass container is filled with something called G Orange Dye. Something used in the process of measuring protein content of milk. A process called dye binding analysis.

Lower left: My photo taken during a bicycle trip to Pullman, early 2000's.

Back door to Troy Hall. The door my dad usually entered.

To the left was an ice cream shop named Ferdinand's Bar. Ice cream from the WSU creamery and the famous Cougar Gold Cheese.

Troy Hall has been totally remodeled so only the brick outer wall was preserved. A glass atrium has been built to put this facade inside the atrium. Someday I hope to get back to Pullman to take a look.

Ferdinand's is still in business at it's present location.

Bottom right: Front side of Troy Hall taken in 1997.

See more photos of my childhood and a few other memories.
Posted by Theslowlane Robert Ashworth at 12:15 PM