I say that there needs to be open mindedness in religion. Not following only one dictatorial interpretation. Some folks would say, "what about science itself?" "Isn't science dictatorial?"

Scientific understanding is always changing. It isn't cast in stone. That's what I would say. Our understanding of what we think is the truth is subject to revision. In science, they often say, based on the best evidence we are aware of to date.

It's also true that not all scientists agree on things. Debate and civil discussion is par for the course. 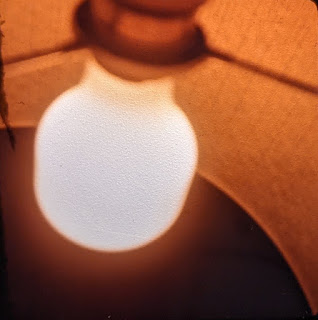 Experimenting with my camera by the living room lamp when I was in 7th grade. Back in the days of film cameras.

I sometimes say if the people who invented the incandescent lightbulb were like religious fundamentalists, they might have decided that a bamboo filament was God's intended solution for all time. We could still be using bamboo filaments that burnout in a short period of time. Luckily, inventors, such as Thomas Edison, changed course many times. For many decades, lightbulbs settled on tungsten for the filament.

Now we are moving on again as most of the lightbulbs, in my place are LED. The filament solution is history.
Posted by Theslowlane Robert Ashworth at 2:49 PM