Abandoned WSU steam plant they were hoping to renovate. Turns out it's still in use. Left hand must have not known what the right hand was doing?

Exiting plans had started to move forward for renovating Washington State University's old heating plant. Turn it into meeting spaces, offices and eateries. A joint project between WSU and the Port of Whitman County. Some grants were applied for and approved. Some money was spent.

Turns out the plant is still in use! WSU pulled the plug on the project when they determined that the plant wasn't abandoned after all, I guess. Continued below. 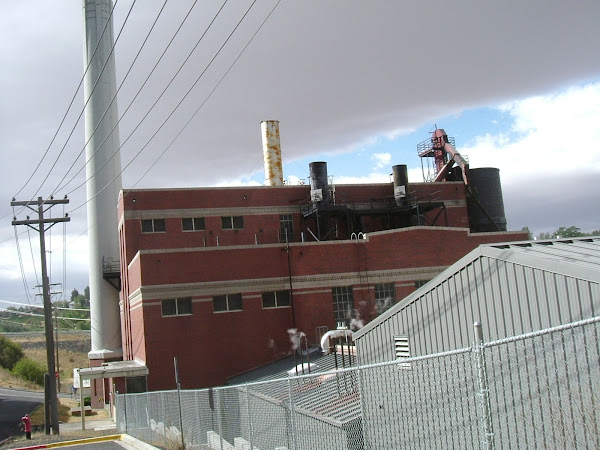 It's strange. Somehow communication wasn't happening. My hypothesis is that somewhere in administration, they hadn't checked with the physical plant staff that runs the WSU heating system. Who knows. How could this plan have gone on for nearly 2 years before someone said, wait a minute?

It is kind of disappointing. Just following the news from my home town, I was looking forward to the renovation. Folks from one of the partners, Port of Whitman County, are disappointed also and there is some news of legal action.

An old steam plant, in Spokane, was turned into a great venue for dining, offices and so forth. I visited during a bicycle trip around 2012. Back then, it was called Steam Plant Square and Steam Plant Grill. In it's earlier incarnation it heated parts of downtown Spokane. 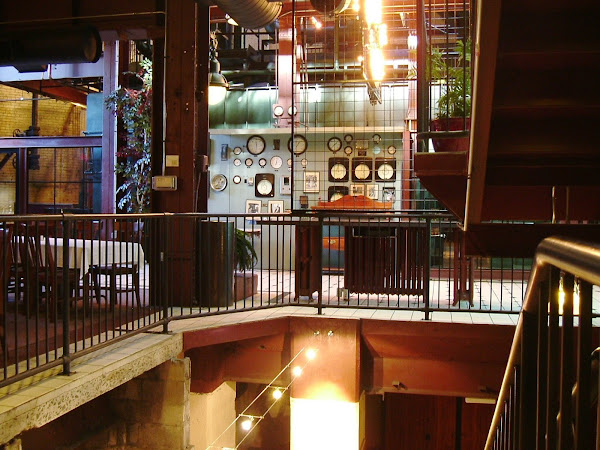 Steam plant renovation in Spokane as of my visit 2011.

In Pullman, there must have been kind of a communications screw up, I guess. Did people higher up in administrations forget to talk to lower down staff who are actually running the heating system? That seems to be a common screw up in big organizations. Lack of communication? Talk is often thought of as cheap, as in the phrase "talk is cheap," but talking can be very useful.

Turns out there is an interesting history that predates this situation.

Around early the 2000s, WSU was considering building a new heating plant in conjunction with a power company called Duke Energy. The new plant would generate electricity and provide steam to WSU as part of a cogeneration plant, if I remember correctly.

I thought the plan was with Avista, the local utility, but someone looked it up and remembered better than me. It was Duke Energy, I guess. Anyway. 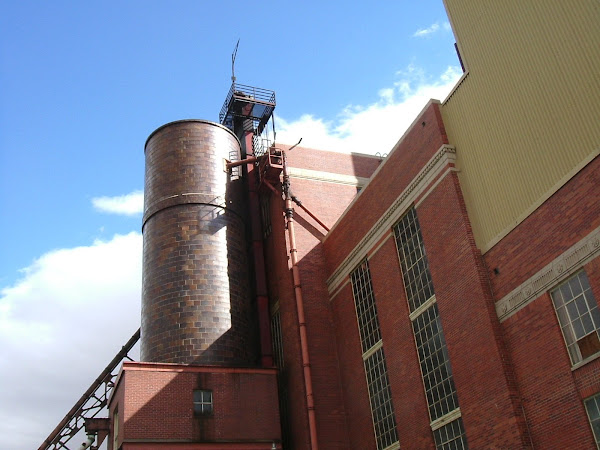 The old plant, built in the 1920s, would have been renovated into a new WSU Art Gallery. It's in a good location on the edge of campus facing downtown Pullman.

That plan was scrapped when, apparently, it didn't pencil out. 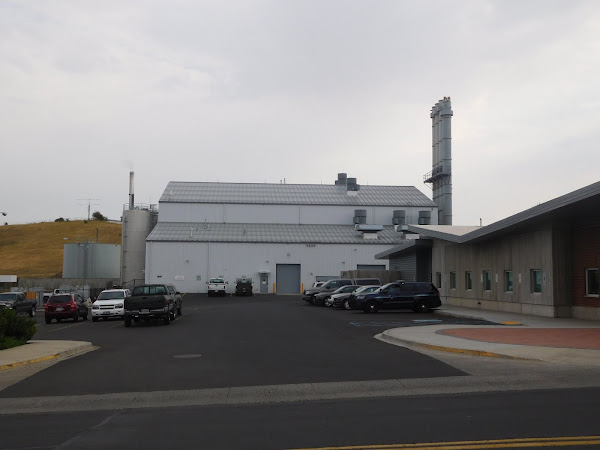 Instead, WSU opted for a less exciting compromise. They needed to expand their steam operations so a new plant was built on the east end of campus along a road called "Grime's Way." The road named after someone, I guess. Back when I was growing up in Pullman, that road was named "Farm Way." 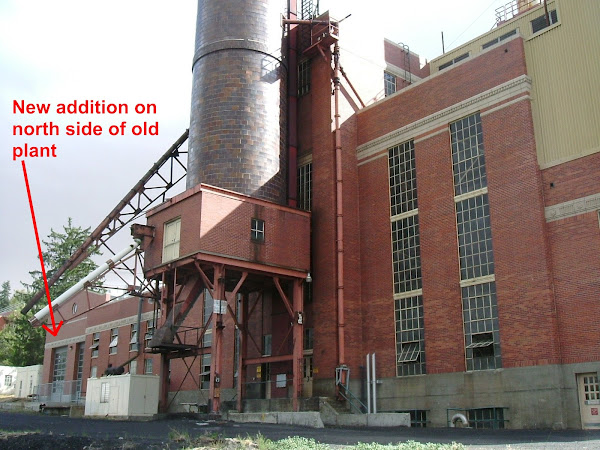 The new plant was built and (I think) an addition was built to the old plant. Some boilers at the east end of campus and other boilers near the old plant at the west side of campus.

The new art gallery was built in another location. It's by the WSU Art Building. They tore down and relocated the old campus police / fire station.

During my years growing up in Pullman, the WSU steam plant burned coal at least in the winter. I toured it, back then and they said it could burn coal, natural gas or oil if need be. Different boilers, burners and so forth. 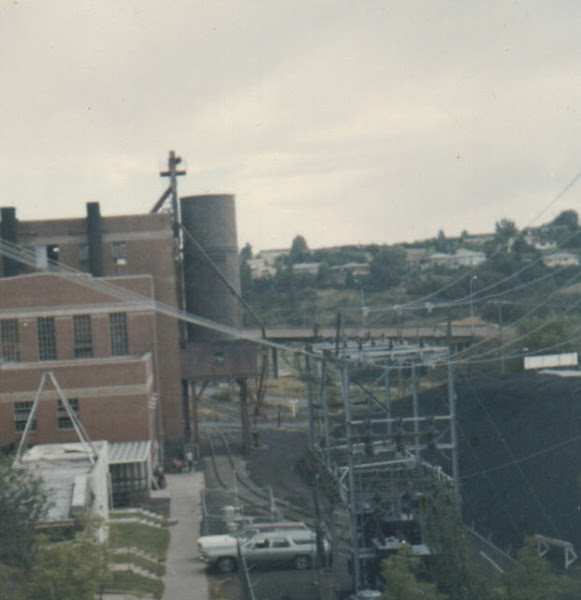 Older picture of the plant taken during my college years when I was home for the summer. Coal pile seen to the right.

I also heard that they could generate, maybe 20% of the campus electricity from a steam turbine in the front room of of the plant that overlooks the notorious "Power House Hill;" a hill I felt accomplished if I could ride my bike to the top. I'd have to be in the lowest gear. 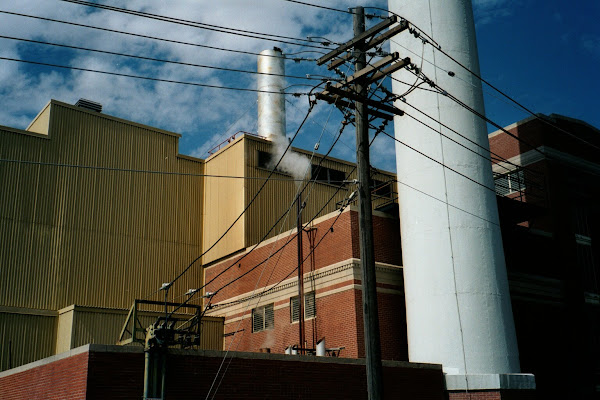 Coal operation was discontinued in the early 2000s when the current steam heating configuration was built. I think it's all powered by natural gas.

They must still have quite a bit of operating equipment in the old plant. Pumps, steam tunnel entrances, feed water treatment, electrical, maintenance; whatever.

I'm thinking, maybe they could do something on a smaller scale with the front room of that plant; where the steam turbine used to be. I wouldn't know, it's just a guess. Maybe some of the money already approved in the grant can still be used in cleanup or something. It isn't that much money yet. The rennovation idea would ahve cost in the millions. 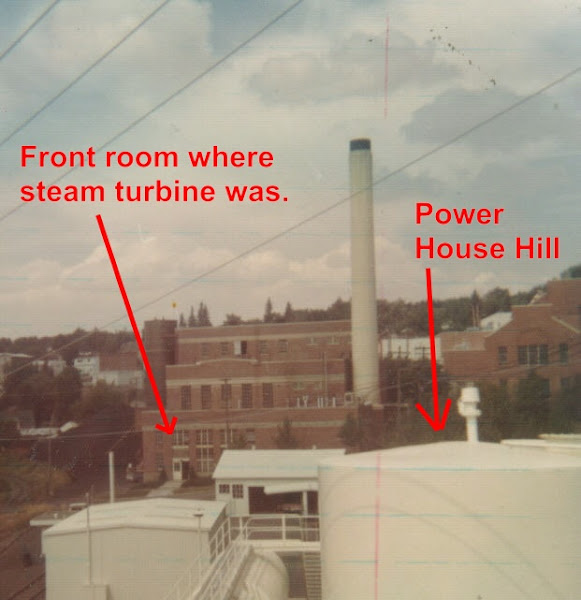 Image I took around 1973, my senior year in high school. Original look before a somewhat ugly (utilitarian) addition was added. 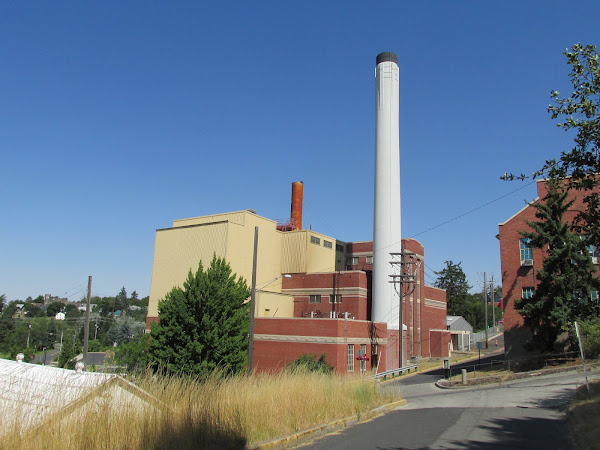 2003 image with the yellow addition. Someone said it holds old baghouse type pollution control equipment to reduce dust from coal burning? I think that addition came in the 1980s. 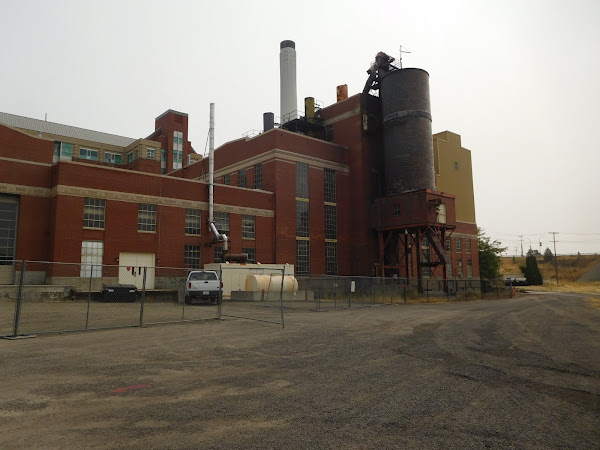 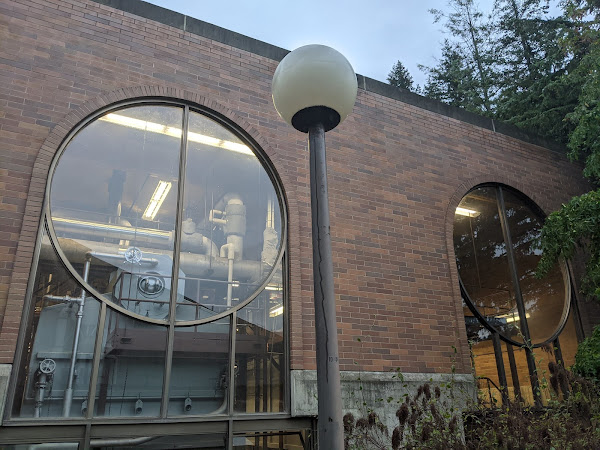 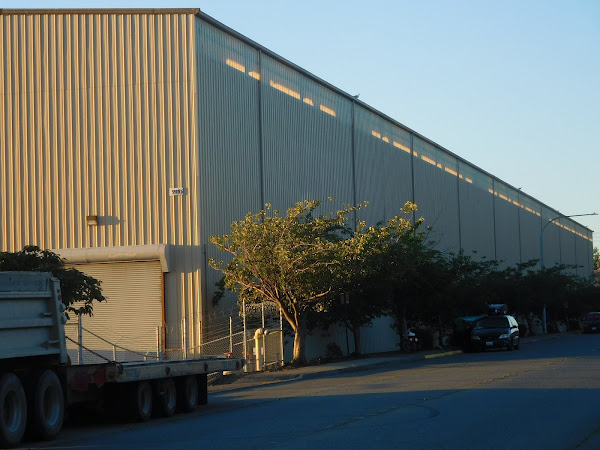 Down on Bellingham's waterfront there is a power plant with a fairly boring wall, but they did paint a mural on that wall more recently. 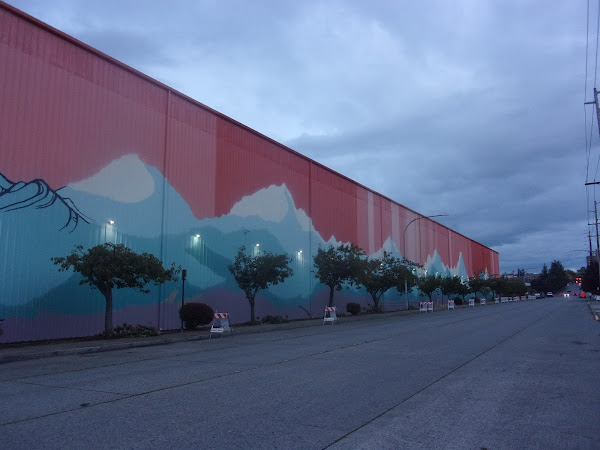 Near Bellingham's waterfront power plant was an old pulp mill, Georgia Pacific West. Most of it has been torn down and that area is slowly turning into a redevelopment district. A partnership between Port of Bellingham and the city. Some of that planning has been rocky as well. It's been a long time in coming.

They are trying to retain some artificts from the old mill for the sake of art. An old granery building has been restored, some condos are under construction, there is a jump track for bikes at least until they find something else to do with that space. It's quite popular. Also there's an outdoor beer garden and some other things. 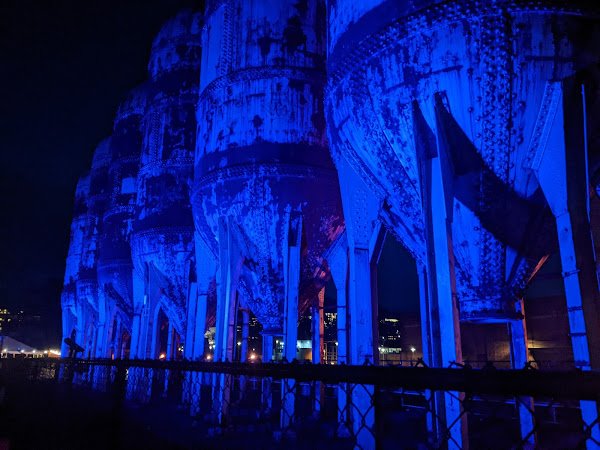 Old digester tanks, from the pulp mill, can now be lit up in various colors.

My article on WWU steam plant in Bellingham. Published in The Betty Pages.
Posted by Theslowlane Robert Ashworth at 10:25 PM