The times they are a changing. Less water in Colorado River. Likely to be the new normal. 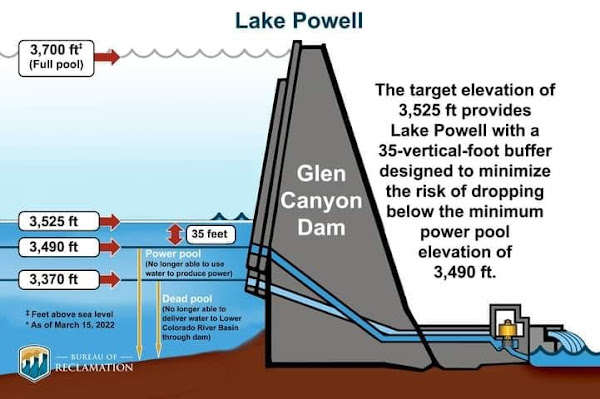 A large region of the US has built an economy on the assumption that there would be sufficient water in the Colorado River. Now it looks like the "new normal" means the river could be nearly drying up.

Hydro electric power was not a huge source of the south west's power mix, but it's non fossil fuel nature will be missed as power demand could be made up by switching on other sources; such as coal plants, if solar and wind is not built quickly enough.

If dams have to be removed, I've heard that covering much of the of the area, that was submerged by the reservoir, in solar panels could generate more power than the dam itself.

I've heard it said that they should never have built Gen Canyon Dam, up stream from Hoover Dam. Evaporation from the surface and leakage out of that reservoir makes the water shortage worse downstream at Lake Mead behind Hoover Dam. Lake mead is also very low.

There are proposals to drain Glen Canyon Reservoir to consolidate storage of the water in Lake Mead. Putting all the water in one lake, instead of two, means less lake surface area for evaporation.