Microwaves are not really that micro compared to light waves. Our evolving language about the electromagnetic spectrum can be confusing and frightening.

I just got to thinking that much of the fear about the radiation, that we are exposed to each day, comes from the the ways we think about "radiation."

Heat and light are "radiation." They are part of the electromagnetic spectrum of radiation, but we are less worried about them because we can see light and we feel heat.

Other forms of radiation we don't see so they can seem more spooky.

As for cancer danger, from what I gather, the only forms of radiation that are dangerous are the very high frequency (shortest wave) forms.

These frequencies are higher than both heat and light. This would be ultraviolet light, X-rays and gamma rays.

They call these the "ionizing" forms of radiation. That's why sunlight can cause skin cancer. It's not the lower frequency light from the sun, but it's the ultraviolet light that causes skin cancer.

Windows tend to block ultraviolet light so the danger is more from being outside in the sun. That's why we need sunscreen.

Radiant heat is basically radiation. If we call it heat, it's less scary, but when we call it "infrared radiation," it can sound more scary.

Some forms of radiation can travel, spookily, through objects; including our bodies. X-rays for instance. Gamma rays also. These are real high frequency waves that can be cancer causing. The ionizing part of the electromagnetic spectrum.

Light doesn't travel through most objects, but it can travel through glass. Light seems less scary, but we are exposed to lots of that radiation on a sunny day.

The lower end of the electromagnetic spectrum gets real confusing.

The lower end is radio waves and microwaves. These can travel through objects, like our bodies. That can make them spooky, but they are such low frequencies that they are not cancer risk; from what I understand.

Cellphones use these lower frequencies.

These lower frequencies of electromagnetic waves can cause heating; like the heating in a microwave oven. This can be dangerous as it can cook tissue, but only if exposed to lots of power from being too close to a strong transmitter; like putting one's hand inside a microwave oven when it's running.

In the radio industry, they call that heating the "RF burn," meaning "radio frequency burn." Something you have to think about when climbing a big radio, or TV tower, to do repairs.

Cellphones have less power so even close to the body, they don't cook you. They may heat up a bit, but not enough to cause dangerous overheating; from what I understand.

They say cancer risk is not a factor with the low frequency waves that even 5G cellphones use. It's all still lower frequencies than heat and light.

Still, these waves are invisible and they can travel through us, so they seem spooky.

The language we use to describe radio waves is spooky also, in a way. When radio was invented, it was all real low frequency. Basically the AM band.

Then they figured out how to transmit some higher frequencies that they called "short wave." We still call these low frequency waves, shortwaves, however.

Now we know about much shorter waves so "shortwave" is actually "long" by comparison. FM and television signals are shorter than so called shortwave.

Shortwave bands aren't used that much, these days. They were the international broadcast bands of years past.

Next we figured out how to transmit microwaves. Microwave towers, radar and cellphones. Microwaves are still "long" compared to heat and light waves, however.

Our definitions of short and long have evolved since the early days of radio, but the old ways of referring to these waves remain. We still call shortwave radio, "shortwave." We still think of microwaves as small, but they are big compared to light waves.

Another thing that's confusing is how we talk about "high" and "short" in the same breath. The higher the frequency, the shorter the wave. Short means smaller, but it also means a bigger number for frequency.

I know, it's complicated, but I have found it very interesting as well.

The dangerous waves; X-rays and gamma rays are more rare unless one is close to the source, like when having an X-ray.

We have gamma rays going through us all the time from space. I guess low enough power that it doesn't really effect us that much; unless we are living on the space station. Our Earth's atmosphere filters lots of that stuff out.

A very good graphic about the spectrum that I found via Google image search. It's from Encyclopedia Britanica. 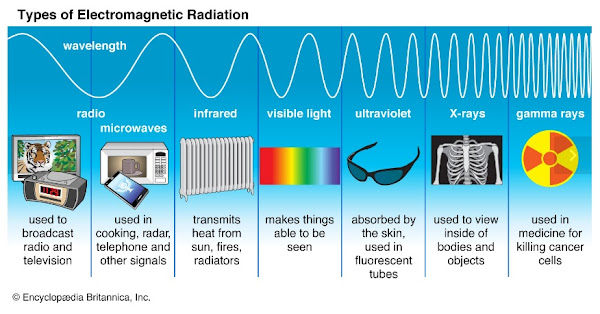 My only complaint, about the graphic, is the ultraviolet description. I'd say, "used in black lights," like for black light posters. Fluorescent tubes produce visible light, but that light is created from the ultraviolet light inside the tube being turned into visible light by the phosphorescent paint on the inside surfaces of the tube's glass.

Old style florescent lights used mercury also, inside the tube. Most of these old style lights are now being replace by LED that look the same, but my guess is much safer.
Posted by Theslowlane Robert Ashworth at 11:51 AM