Now the need for police is likely more appreciated than in summer of 2020. 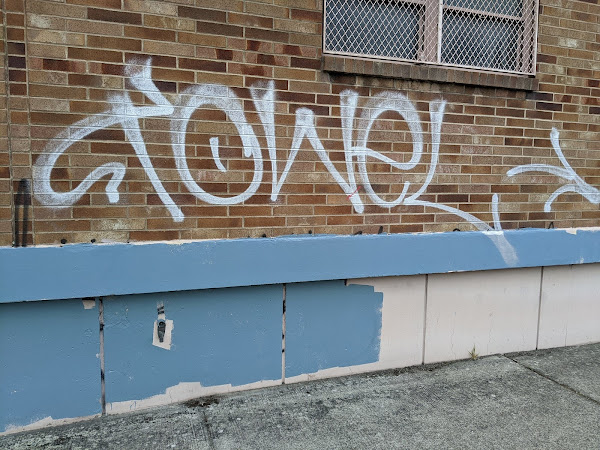 Telephone exchange bldg. in Bellingham becomes a magnet for graffiti.

Increasing crime, in this county, is becoming a topic of discussion. Quite a few conservatives are blaming Democrats for rules that place undue limits on the police.

To some extent, I agree as I was not a fan of the big focus on police reform that was prevalent during the summer of 2020.

As for situations that discriminate against the poor, I tend to look at things like exclusive single family zoning, rather than focusing on the police who do have a difficult job. More recently, that phrase, "defund the police" has fallen by the wayside, however.

Washington State may have passed some badly designed laws making policework more difficult. The Legislature is trying to step back from some of these reforms, more recently, but they might need to do more.

I'm okay with more funding for social services that are less expensive than police, but police are needed. I'm sure some police reform is needed; especially depending on which city one is talking about. Still, I think there was too much focus on police reform when other things in society cause more of the problems people are complaining about.

Seems like there has been some hatred toward police; enough to cause low moral so it's difficult to retain and recruit police. Quite a few positions are unfilled locally, from what I gather. A big problem in Seattle as well.

Seems like some of the anti police rhetoric of 2020 wasn't the best focus, but liberal politics has been tainted by it. I tend to think that politics, based on anger, creates problems.

Now that the crime rate has risen and people are getting scared, liberal politics may be tainted by the tendency of folks to paint everything with a broad brush. Some of the reforms that came out of 2020 likely went too far, but that situation could be an anomaly. I've often thought conservatives are not friendly to public safety as well. There is the gun culture. Also, people forget that it takes taxes to fund police and conservatives are often anti tax.

Here in Whatcom County, we have a convergence of liberal and conservative values that lead to the failure of new jail construction. Lack of space in our old jail is leading to problems. Dangerous people being let out as room in the jail is very limited.

I'll admit, I voted against the new jail, back then as well, but eventually we will need to do something.

The stereotype liberal thought the new jail proposals were too large and needed more focus on alternatives to hard core incarceration. At the same time, there is a tendency, among stereotypical conservatives, to vote down big taxes. The new jail would have maxed out our local taxing authority for quite some time, at least in that category of taxation.

Washington State has some limits that it imposes on local taxation. Limits imposed by popular initiatives on the ballot. Remember Tim Eyman?

Some kind of solution to the jail issue will be back on the ballot eventually.

The crime rate is now a big topic in local discussion.
Posted by Theslowlane Robert Ashworth at 8:02 PM