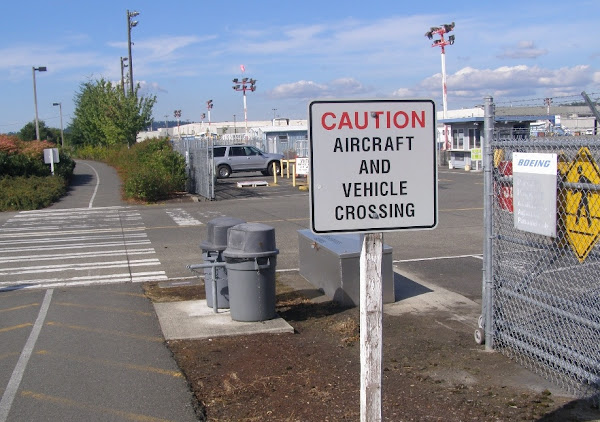 Watch out for planes crossing the bike path near Renton's little airport; one of many small airports. Seatac is a much bigger airport. Image taken 2013.

If the economy and population keep growing and air travel remains like it is today, in spite of climate change, this region outgrows Seatac Airport. The state of Washington is looking ahead to 2050. New airport sites by Tacoma and Olympia are on the "short list" for, possibly, a brand new airport.

According to an article I read (Sept. 24 2022 Bellingham Herald) Puget Sound Region is projected to see 27 million more annual passenger boardings than it can accommodate and twice the amount of current cargo demand by 2050.

From what I read, Seatac serves 50 million passengers per year. That's more than the population of Washington State, but lots of people fly several times per year and some from other areas transfer at Seatac. By 2050 room for even more passengers and cargo is projected to be needed.

Near Tacoma, “Pierce County East” and “Pierce County Central” sites were deemed attractive due to the potential number of passengers they could accommodate: 20 million and 19 million annually, respectively.

Paine Field, in Everett, is another place discussed for the expansion, but I guess it isn't large enough already. They would want to add to it. There must be a lot of development around it constraining expansion?

Paine Field is already taking some of the load off of Seatec.

I've heard people talk about using Bellingham Airport for this, but I don't think it's in the study. Must be too far from Seattle and expanding it, to more runways, would be an issue. Bellingham is already, kind of, an alternative airport for Vancouver, BC.

One wonders if we will find low carbon fuels for jets? One wonders if other technologies, such as telecommuting or slow floating helium airships, will take much of the load away from jet traffic? Seems like procuring right of way for high speed rail is unlikely, however.
Posted by Theslowlane Robert Ashworth at 3:53 PM