Carbon dioxide is the invisible threat. The air looks deceptively clean and smells pristine, but ... 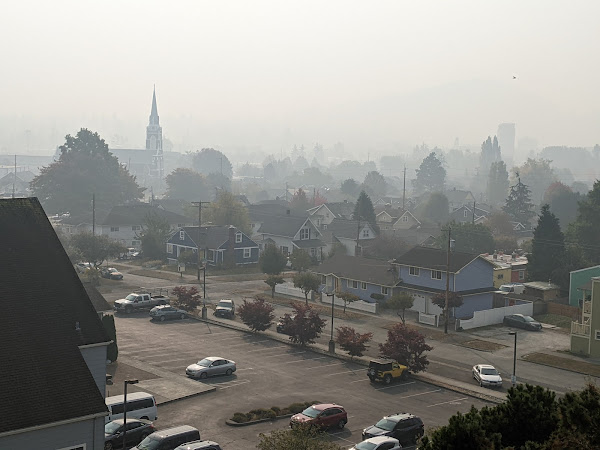 Pollution in Bellingham, WA. from forest fires. October 19 2022. Probably worst day for it this year.

Smog use to to be a big problem in places like Los Angeles. Then came more pollution control technologies; such as the catalytic converter and smokestack scrubbers. They cleaned out some chemicals and the particulate pollution so air looked clean again. It even smelled clean.

Problem is, carbon dioxide is still being emitted from our economy. It's harder to filter out of smokestacks and tailpipes. Carbon dioxide is an odorless, colorless gas. In small quantities, it isn't poisonous. The air can still look pristine and clear.

Carbon dioxide traps more of the sun's heat so it's increasing the warming of our planet. This leads to more droughts, in some areas, which brings forest fires. Forest fires bring back the particulate smog.
Posted by Theslowlane Robert Ashworth at 4:08 PM