While lots of people argue over the status of statues about historic figures that may have had slaves, bigoted attitudes and so forth, I have an optimistic thought about this. The controversy happens because society has progressed over the years. Attitudes and practices that would be considered bigoted today were basically normal back then. The normal is changing; at least in western societies.

The best way to deal with these statues is to keep them for remembering history. Rewrite descriptions to acknowledge the faults as well as the accomplishments of historic figures. Possibly move some of the statues to less prominent locations.


Some things in the news, past and present.

Old Highway 99 through Washington State once named for Confederate President Jefferson Davis. This situation was forgotten, but rediscovered in 2002 sparking a controversy. Marker discovered in Peace Arch Park. 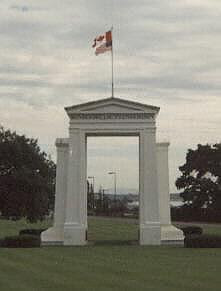 2018. The City of Victoria, BC in Canada planning to remove the statue of John A. Macdonald, Canada's first prime minister, from the front steps of city hall because of what it says is his role as "a leader of violence against Indigenous peoples."
Posted by Theslowlane Robert Ashworth at 1:48 PM