No War, No Locks 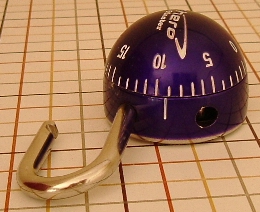 It is conceivable that there is some place, in the universe, where a civilization exists with no locks.

No need for passwords or anything related to security.

No armies or wars either.

This would be a society where the concept of "locking something" would have never occurred to anyone.

Idealism is worth contemplating at least, even if it isn't always pragmatic in our world.
Posted by Theslowlane Robert Ashworth at 9:02 PM 1 comment:

As an eighth grader growing up on a dead end street, I set out to ride my bike up and down the block. Yelling out the mantra, "Gamal Abdel Nasser," over and over again (just because it sounded funny; like "Heil Hitler") I wasn't watching where I was going. My bike slammed into a parked car and I landed on the roof of the trunk.

Good thing I wasn't going fast. I only got a few scrapes, but the bike's handlebar was bent out of shape. They tried to fix it at Chuck's Hardware, on Main Street in Pullman, but I had to get a new handlebar. Bending it back into shape broke it off.

Nasser was in the news, those years, as President of Egypt.
Posted by Theslowlane Robert Ashworth at 3:10 PM No comments:

Bike trail near where Scrappy's Junkyard was 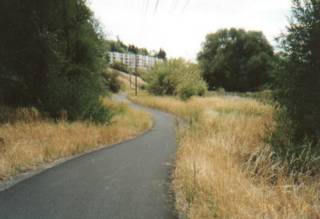 A better route for bikes today.

My childhood years were spent in Pullman, Washington where biking, back then, was the pits. Today, Pullman enjoys some wonderful bike paths, such as this alternative to North Grand.

In the 60s, it was hard to avoid North Grand, a busy 4 narrow lane. It was full of frat house kids behind the wheel. Pullman is home of Washington State University. One day, as I was biking home from school in the right lane, a car was trying to pass on the right. Seeing, me he had to swerve back into the left lane in front of another car. That car laid on the horn. Luckily I was okay. Remember, kids didn't wear helmets back then.

Today, one can avoid North Grand by riding above trail.

In the 1960s, there was Scrappy's Junkyard, where the trail is now. Some boomers have fond memories of old Scrappy Richardson. He could miraculously find just the right gas cap, if you needed one, among his mountains of junk. My memories are less positive. I feared getting near the Junkyard dogs.

If I could be a middle school kid in the Pullman of today, with that nice bike path instead of "North Grand or the junkyard," I would take up that offer. Today's kids will have some nice memories. 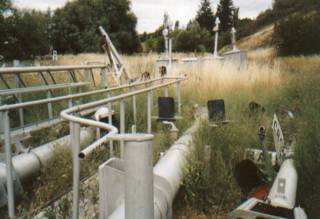 Dismantled crossarms from railroad along North Grand Avenue in Pullman, WA. 2001. Railroad is still in use. 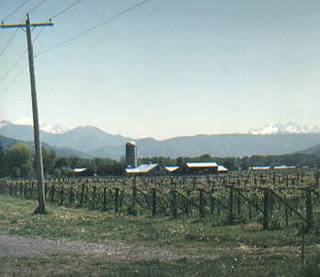 Articles and an interesting cartoon written by other people. The articles reported on volumes of citizen opposition to a possible freeway. The cartoon showed many lanes of ugly traffic, depicted on a planning document, with one planner saying to the other, "Maybe they'll buy it if we throw in a bike lane." The Sun is a free publication available at places around this area.
Posted by Theslowlane Robert Ashworth at 6:27 PM 2 comments: 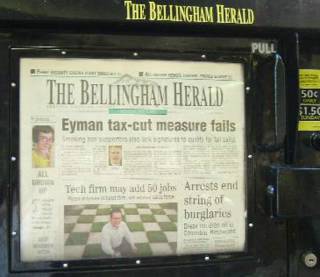 I was thrilled at the success of the Cassini space probe that went into orbit June 30. Next few years will bring back fantastic pictures and data. With all the bad news in the world, it is good to see some positive news about our urge to explore. For the true story and pictures visit
Cassini's web site.

Several images from Cassini show, what looks like, another spacecraft orbiting Saturn!

Mission controllers, at JPL, look at their screens in utter amazement.

No other spacecraft is known to be orbiting Saturn, no Russian, American, Chinese. "What on Earth - we mean Saturn - could this be?"

Scientists speculate. Maybe a problem with the imaging?

Someone on the team playing a practical joke and inserting this picture into the data?

An alien spacecraft, from another solar system, has wandered into our solar system and been captured by Saturn's gravity?

The space craft looks like our unmanned Voyager probes which flew past Saturn 20 years ago and are now leaving the solar system. Is this space junk, like that, from another solar system which has wandered into our solar system and been captured by Saturn's gravity?

There is no sign of any radio signal. Craft looks very very dusty.

NASA scientists are able to determine orbit of said object.

Cassini's orbit isn't likely to make another close pass by this object. Few images of object are available.

A debate breaks out with-in Cassini mission control. "Should we change the mission plan and go back to the vicinity of this UFO, or go on with our original itinerary?"

Each time Cassini goes around Saturn, it is in a different orbit looking at moons and things. No upcoming orbit will take it near the UFO again in this mission plan.

Scientists debate weather they should alter the plan or go on with the valuable science goals of the current Cassini itinerary.

NASA appoints a "Blue Ribbon Panel" to discuss the options.

This mystery makes big headlines all over the world. For a while, Art Bell devotes his entire radio show to the topic.

NASA decides to make this UFO the first target for an extended Cassini Mission after the original 4 year mission is complete. Chances are good for an extended mission. It may take several years to figure out how to safely go into that orbit again and glide by the object at a slow relative velocity. The Blue ribbon panel devises a strategy.

We put those kind of plaques on our Voyager and Pioneer space probes. That was a true case of "long range planning." thinking about the questions that some "beings" may have if they find the plague in some future millennium.

Finding possible evidence that we aren't alone in the universe pushes the news from ugly mid east wars off front pages. 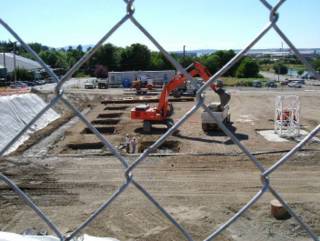 Construction project getting started in the Fairhaven District of Bellingham. Condominiums along Harris Street.
Posted by Theslowlane Robert Ashworth at 4:07 PM No comments: