Preparing for jobs of the future

Seems like many of these jobs will be low pay and will not require that much advanced technical training. Educators often miss the mark thinking future jobs will all be high tech.

Preparing for many of the future jobs will require learning to live well on low income. This needs to be taught more.

For instance learning how to get around without a car, staying healthy and avoiding medical bills, maintaining self esteem and finding friends without having money be the prerequisite. How to use second hand shops. Using the Internet as an inexpensive and powerful tool for social and political action.
Posted by Theslowlane Robert Ashworth at 3:56 AM No comments:

Retail dead zone? The automobile did it 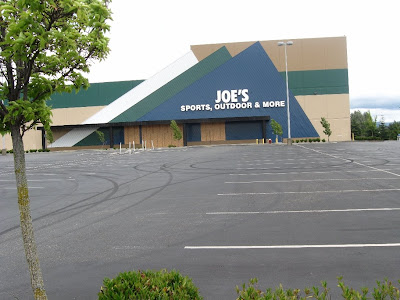 Where GI Joe's and Good Guys were. Also, not pictured Circuit City empty.

Two empty box stores across one parking area have created what amounts to a retail dead zone in Bellingham. These were parts of chains that went under so maybe it doesn't say anything about local conditions, but these type of chains tend to locate in similar areas. Car oriented development. Also, of course, just more retailing than the economy can sustain.

Meridian Street near Bellis Fair Mall has created a wall of traffic that isn't pleasant to be in. Also not real easy to get across. Yes there are traffic lights, but the intersectionms are large. Not that friendly for bikes or pedestrians, of course, but those type of areas become less drivable also as traffic increases. 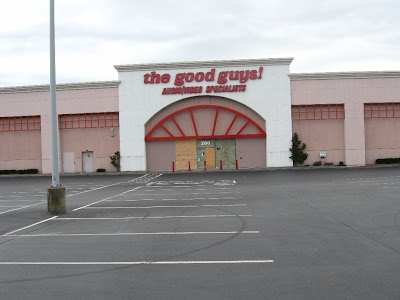 So it seems like some areas near Meridian (the main drag) could end up being in a "shadow of the traffic." Areas that are hard for people to cut across traffic streams to get to.

Car oriented retailing spreads out toward the periphery of the area while allowing the center to soften. It can be advantagous to locate right where the traffic first comes into the area. I've heard the term gateway before. Catch them as they are just coming off the freeway, or coming into town. Toward the center of car oriented development, the advantage softens.

With all the stores out there, people are tapped out before they get through the traffic into the center.

This is kind of what happened to downtown Bellingham many years ago when Bellis Fair Mall and other developments along I-5 really got going. Downtown became less accessible, sort of like a dead zone in the center. Back then, Meridian offered more space (for parking) and easier access for people coming into town from a large region.

Well now it seems like some of the central areas in the Meridian vicinity are starting to implode, like the downtown did in years past. Car oriented retailing needs lots of space, of course, but it also seems to seek "gateway" space. Be at the periphery where people are first coming into the area.

Sometimes I hear of threats by box stores to move out of town if they don't get favorable regulatory conditions in city limits. That political drama makes news, but there is also just the tendency to strive for being on the edge; the gateway.

Meanwhile, downtown Bellingham seems to be making quite a comeback. That's partially because there is more to it than just the type of retailing where easy parking is thought of as a prerequisite. Downtown is getting more residences. People don't need to drive here and park, they already live here.

Also some of the vibrancy I notice is people out doing things, not necessarily just shopping. A broader definition of vibrancy. It may not necessarily mean more dollars in the coffers.

In the last few years, I've noticed more residencies coming into the Meridian area as well, but you don't see a lot of people outside of their cars yet. Maybe that will come eventually if more trails and plazas get built.
Posted by Theslowlane Robert Ashworth at 2:38 PM 2 comments: 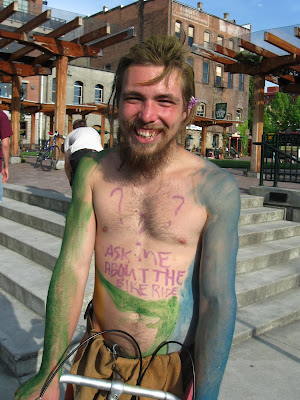 It couldn't be totally naked, but the ride was good. Fun with lots of smiles.

Maybe in future years, one step at a time, but this was a big step along what some people might call "that slippery slope."

There was also dancing. I say, dance your errands, ride a bike and have a good time.

Many thanks to Zack (pictured above) and others for smiling energy and organizational skills.

See more of my pictures from the local rides on Flickr.
Posted by Theslowlane Robert Ashworth at 8:41 PM No comments:

Sunlit days and biking around 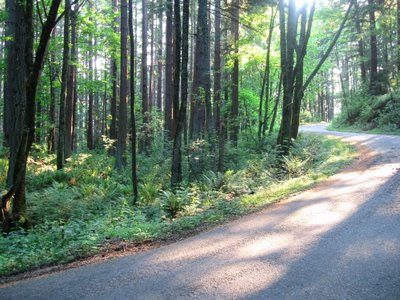 Early evening sun has unusual orange cast. Might be dust from Alaskan volcano? I ride up through the woods of Sehome Hill.

Like a Sunday drive with no gas consumption guilt. Instead, burning calories. 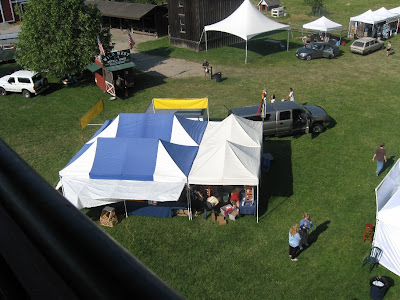 On another trip, I head to Ferndale and then back on the Nooksack River dike path. Highland Games is just winding down in Hovander Park. I climb tower and look down as vendors are starting to pack up. No cover charge arriving this late. Heard the last of the music. Stumbled upon this happening. 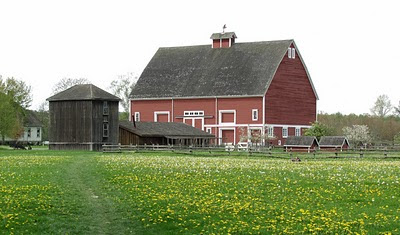 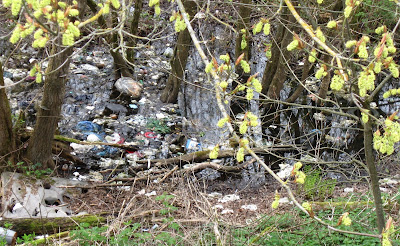 Litter in a wetland along South Bay Trail. Not what most environmentalists envision. 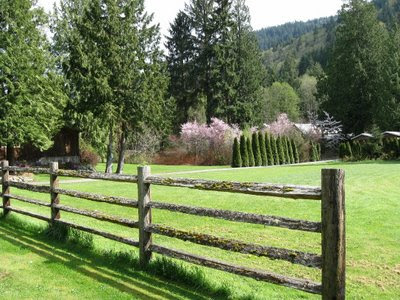 Saturday saw me bicycling from Bellingham to Mount Vernon. I wasn't even thinking I would make it as far as Mount Vernon or the Skagit Valley's "traffic clogged" tulip fields. I got a late start.

Went as far as north part of Mount Vernon. Through Burlington on sidewalk of "busy" Highway 99. Then turned around and headed back to Bellingham.

Things seen along the way, like flowering trees in people's yards, were the goal. I've been to the tulip fields other years.

Roads between here and Skagit County were quiet, but I could tell as soon as I got to the race track called Skagit Speedway that's along 99. Cars got more noisy. Vroom, vroom; mostly coming up from the south.

Coming back north, quiet returned as soon as I passed the race track entrance.

North of Burlington, I noticed a nice, new bike path along 99 for a ways. Just south of Chuckanut Drive crossing.
Posted by Theslowlane Robert Ashworth at 3:30 PM No comments: