There's some thought about doing building high speed rail from Portland, Oregon to Seattle and then to Vancouver, BC.

I just got to thinking that a better idea, given the state of our society, is to build the high speed rail from Seattle to Cle Elum, Washington. Make it a commuter rail, rather than an intercity rail.

I might be kind of a cynic, but this is what our society has come to. Housing is becoming so expensive, in Seattle area, that people often have to commute from way out. Cle Elum is on the east, sunny side of the Cascade Mountains. I hear that quite a few folks move there and still commute all the way to Seattle for at least the last years of their employment. They must be thinking of retiring in sunnier Cle Elum.

Could Cle Elum and Ellensburg become the new "East Side suburbs of Seattle? High speed rail could bring folks to Seattle in short order.

Meanwhile the idea of going from Seattle to Vancouver, BC or to Portland, for that matter, runs into the fear of existing property owners along the potential routes not wanting the rail line to bisect their neighborhoods. Going east, less people live in the Cascade Mountains. We would probably have to give up the Iron Horse Bicycle Trail, however. That would be the most likely route. The Iron Horse Trail is the old Milwaukee Road rail line. It even has it's own tunnel. I love the Iron Horse Trail, but I only get there once every few years.

Maybe the folks in Cle Elum / Ellensburg area wouldn't want to become a suburb of Seattle, however. It's kind of sick, in a way that it might come to that. Or maybe not. We, as humans, are sure capable of a lot of things. Cross the Cascades in less than 40 minutes? Earthworms can't do that. We have bigger brains to figure this stuff out.

As for speed, it does still look like the jet plane is still the preferred system for intercity long distance travel. High speed rail can't compete, so that's why I'm thinking commuter rail instead.

What about jet fuel and climate change, you ask? Maybe we need a carbon tax.

Over a decade ago, I turned 50. The age people say it's time for a colonoscopy. I didn't schedule one immediately and my doctor wasn't too pushy about it. Yes, it's a good diagnostic tool, but my doctor agreed that what's most important is good diet, healthy lifestyle and lack of colon cancer in my family history. After those things, one might view the colonoscopy as just "icing on the cake." Both me and my doctor were avid bicyclists. His favorite quote, "an apple a day keeps the doctor away."

13 years later, I did finally go in for the colonoscopy. It wasn't bad and the diagnosis wasn't that bad either. In my case, waiting wasn't a problem. This isn't necessarily an argument for everyone to wait. It's just my situation. When I did finally get the procedure, they found one polyp which was removed. It was non cancerous. They say I'm good to go for at least another 5 years.

Here's the story of what lead me to finally getting that exam and what the experience was like.

What's called the ick factor is the main reason I waited. It's kind of an unpleasant thought. Still, quite a few people, I know, go in for their colonoscopies. One hears the stories. They say, it doesn't hurt, the prep is a bit inconvenient, the worst part is the prep, the whole process can be an interesting experience in a positive way.

The most reassuring stories were from folks that were awake during the procedure. I guess it wasn't that uncomfortable. Still, most people go for being sedated.

There's also the politics of medicine. Another reason I waited. From what I gather, colonoscopies are less common in Canada. Everyone gets healthcare in Canada, but that means they tend to be more sparing on the costs of procedures. In Canada, they often use another, much less expensive test as the first line of defense against colon cancer. The Hemoccult Test. In Canada, they may have a lower cancer rate than USA partially because they can afford healthcare for everyone.

The Hemoccult Test is where one places stool on a card and sends it into the lab. If blood is not found, one is probably good to go. Some circles say this is almost as good as getting the colonoscopy. Maybe that's why Canada can afford to offer healthcare to all. It's less of a Cadillac treatment, but good enough. From what I hear, hemoccult is coming back into style, at least in some circles, down here in USA.

For several years, I took the hemoccult test each year. It's better than nothing. I eat lots of apples, salads and have an active lifestyle.

Around the time I turned 63 the hemoccult found some blood. At first I thought I had made a mistake on the test and my doctor even allowed me to take it a second time. That hemoccult required a prescription. The second test also showed blood so I decided I'd try the colonoscopy. That's the hemoccult doing it's job.

I quickly went to the clinic for colonoscopy and set up an appointment. Due to my good health and no other symptoms, it took quite a while to get scheduled. A busy appointment book. The appointment was scheduled around 6 months in advance.

The various stories I heard, from other folks who had the procedure were reassuring as far as the ick factor is concerned. Also it was covered by my insurance. Maybe it would be interesting. Might as well think of it in that way. Lots of technology. Sort of an adventure.

After the procedure, I wanted to eat my first meal at the nearby Saint Joe's Hospital here in Bellingham. It has a large cafeteria that one can just go to without having to be "in the hospital." One reason I wanted to go there was that a cafeteria provides a wide variety of foods. The prep cleans out your colon so I though it might set back one's internal microbiome. My theory is that a good way for the first meal to rebuild the biome is this. Just sample a little bit of what one normally has as their diet throughout the day. The cafeteria provides lots of choices. Rather than just having one type of food, like for instance what you always have for breakfast, sample some of what you eat all throughout the day. In my case, a bit of chocolate milk, salad, apple, main course, snack food and so forth.

It seemed to work okay and it was fun to check out that cafeteria; a place most people wouldn't think to go for local restaurant fare.

To do that test, one needs to fast for at least a day prior. There's instructions one follows. Then there's the drinking of the prep fluid. That's to clean out the colon so they can see what' there.

I was a bit apprehensive. Would it upset my stomach. I'm a sissy about my stomach as I never get stomach aces. Everyone assured me that it doesn't upset the stomach, normally. They did say, kind of jokingly, have fun you'll be living in the bathroom, its diarrhea.

I gradually drank the first bout of the fluid and waited. Even that wasn't too bad. Eventually I had a few liquid bowel movements. No stomach problem. After a few trips to the bathroom, it was just a matter of waiting. Watching videos or whatever. I wasn't necessarily living in the bathroom. Just close to the bathroom, but after while the fluid had passed through.

Then there was the second bout of drinking the prep, around 8 hours later. A few more trips to the bathroom.

Time for the appointment a kind friend took me to the clinic and agreed to pick me up afterwards. The clinic I went to requires that.

Then there's more waiting. One goes into an area with many sections divided by curtains. It's a busy clinic and people are being processed through. It's interesting, in a way, how it's all choreographed.

They put a needle in my arm for later inserting an IV. It's not painful, or at least it's kind of like getting a blood test. Nurse were friendly. Talking to the nurses helped me deal with being nervous. I was less nervous than I had feared.

One nurse stuck around for a while and we got into a conversation about the Mars Rovers. She was asking me questions about it. That helped to pass the time.

Part of the time, the nurses were busy at other stations, but I survived.

In a bit over an hour, I think, it was time to be rolled in to procedure. The whole thing is, basically almost over at this point.

Pretty impressive. It was like they had flipped a master switch and turned me off, then back on again. When I came to, I wasn't even groggy. They said I was good to go, but should take it easy the rest of the day.

Other folks might have a different experience, but I was impressed how alert I was as soon as I came too. It was like, "we're all done." Time to check out that cafeteria. The friend who brought me to the procedure treated me to lunch where I wanted to go. The St. Joseph's Cafeteria.
Posted by Theslowlane Robert Ashworth at 6:17 PM 2 comments:

The deadline for Britain to leave European Union is coming closer. March 29. I think it was a bad idea all along and now they can't decide what type of Brexit they want. Looks like they will get the so called "Hard Brexit" by defalt; an exit without a deal. Maybe they will ask for another delay, but I doubt a delay would change anything.

If they don't cancel Brexit, I guess they should just have the hard exit. See what happens. I think they should try and get a deal from the EU where they can easily rejoin the EU if it doesn't work out.

Looks like the UK parliament may chicken out and try to extend the deadline, but the EU has to approve this also. EU may not go for anymore procrastination. I like the old phrase, "be careful what you ask for cause you might get it."
Posted by Theslowlane Robert Ashworth at 3:39 AM 1 comment:

I have a new album of photos and descriptions. Stories about my childhood. 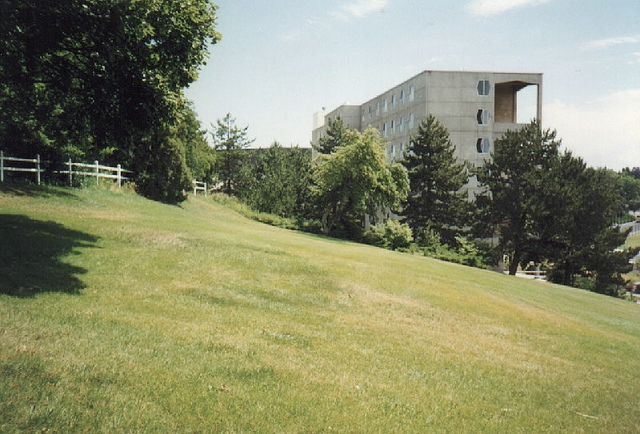 Regent's Hill on WSU campus. A different kind of place to play