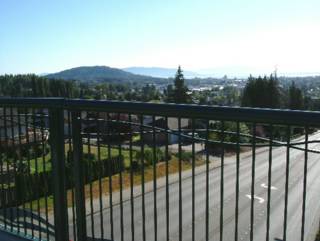 Riding along the Railroad Trail. This new overpass, for bikes and pedestrians, crosses busy Alabama Street. Also offers a nice view out over the city. One need not be able to afford a $300,000 home to have a view, at least in passing.

Some homeowners, underneath the bridge, were NIMBYS (not in my backyard) against the overpass fearing a loss of privacy. With that thinking, maybe Alabama Street, for cars, should be closed to keep the riffraff from going by. 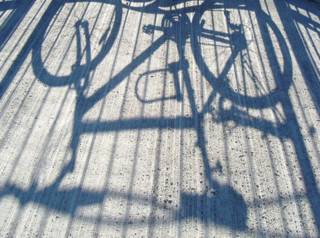 As campaign 2004 revolves around issues of how to combat terrorism, Bush and Kerry only offer slightly different flavors of solution. I don't blame them. If someone is coming after you with a bomb, you are reduced to "get them before they get you."

One of Bush's long term faults is a refusal to address the problem of world population growth. This doesn't get discussed often, but every once in a while one hears about high birth rates in many Moslem countries leading to lots of restless young men. A breeding ground for hostility.

I think Kerry would do more to support family planning efforts world wide.

People often say another long term problem is America's over consumption of world resources. Neither Kerry, or Bush address this. Even Nader doesn't really. Someone like Nader just seems to want to give middle Americans a better break against corporations. Meanwhile his campaign just helps put Bush back in the White House.

The problem isn't really "corporations," it's people. The problem, or much of the problem (I don't mean to over simplify) is consumptive middle class lifestyles.

Much of the world seems to aspire to live like American middle class - upper middle class. Aspirations are for driving cars and so forth. Strong resentments result from some getting that big home and car while others don't.

What the whole world needs is this:

"New definitions of what the good life means." For instance think, "bicycling can be more enjoyable than driving." Look at the stress of being in the fast lane.

The world needs new definitions of what progress is. High technology doesn't necessarily have to mean high consumption. Maybe having an internet connection can mean more than living in a big house.

One good thing about American culture is its openness to change. Alternatives to "main stream" lifestyles can develop non violently.

The Gay movement is one example of this.

Bicycle commuting is another.

Technology can help. How about tele-commuting versus a 50 mile gas guzzling trip to the office?

Non violent and evolutionary change in people's aspirations is what the whole world needs. New definitions of "the good life." Innovation.

If there can be innovation in technology, why not in lifestyles as well?
Posted by Theslowlane Robert Ashworth at 7:12 PM No comments: