I still eat a variety of fruits that sometimes come from distant lands. Eating local is easier to do in summer, but not so easy in winter. How much energy does it take to can? How much space. I live in a small urban space with little place to store things.

Some folks would move to a rural area so they can have their own apple tree. Then they can end up commuting farther than the average city dweller thus having more, rather than less of a carbon footprint.

How much energy does it take to ship small pieces of fruit from afar? Probably not as much as it would take if everyone lived much farther from their work and errands so each of them could try to have a garden.

"Drive till you qualify." Qualify for a mortgage that is. A mantra of sprawl.
Posted by Theslowlane Robert Ashworth at 3:05 PM No comments:

It's either "lifestyle changes" or "technology" that can be the solution to global warming.

Lifestyle changes, technology, or a little of both.

Nuclear power anyone? At least it's not fossil fuel. That's an example of "technology to the rescue." I'm not against this, but lifestyle changes are needed also.

When people think of "alternative lifestyles" they often think "the gay community." Actually, alternative is a much broader term than just gay people, but gay lifestyles can be part of the concept.

As for gay people, there is a great, but often missed opportunity to tie sexual politics with environmental politics.

The big issue of population growth is one of the connections.

Often the opportunity to make this tie is missed. It's missed, in part, because the orthodoxy in gay politics is to say, "we're family too."

It's true, many gay people do have kids and there's nothing wrong with that. It's just that gay relationships don't lead to procreation. Most of the kids are from previous marriages and there are also things like adoption. Much of the gay movement talks about being family and not really being that different from mainstream society. Even consumptive society.

Still, lower birth rates is an important part of the solution to global warming.

Another way to tie sexual politics and the environment has to do with neighborhood density.

Yes, in filling the towns and cities, rather than permitting sprawl to spread out across rural areas. This is a lifestyle issue also. For instance it seems like people cite their "families and kids" as the main reason why they can't live without their cars. Living in a denser environment tends to favor walking, bicycling and public transit over cars. Often people are most "car free" when they live in the dense inner neighborhoods of large cities. There is a big correlation between "neighborhood density" and success in making public transit a large percentage of trips.

It seems to be more than just a coincidence that the dense neighborhoods toward the heart of cities are often thought of as the "gay districts." For instance, "Capital Hill," in Seattle, or "The West End" in Vancouver, BC.

At the same time, one can see a lot of wealth and conspicuous consumption in these neighborhoods. Lots of big SUVs parked in condominium garages. On the surface, it might look like much of urban life is not into the environment. Also, people who can afford to live on this prime real estate will also be able to afford things like big cars.

Somehow, it seems like there are a lot of missed opportunities here.

A better connection could be made between the popular concepts of alternative lifestyle and the environment. Also dense neighborhoods could become more affordable, if more of them were built. For instance denser zoning in more areas.

Families can live in dense environments as well. It's just that in American culture, families tend to spread out to where there is yard space. In the denser city, "yard space" can be "the city park."

If we are to solve global warming, we really need to think in terms of alternative lifestyles. Alternative in a broad sense. This includes accepting gay culture, but it also goes way beyond just that. It means accepting change in many lifestyles. Also, a dose of new technology. Yes, we have to be able to accept change. Change can come in many forms.

People can be set in their ways, but people can also be innovative. The challenge is here and the future will tell if we are up to this task.

Short segment of a video with me talking about the need for Lifestyle Diversity.

Posted by Theslowlane Robert Ashworth at 6:03 PM No comments:

After Bellingham's Gay Pride March down Cornwall Avenue, the band preformed at Depot Market Square where over 1,000 people from many walks of life gathered for a festival that day. There were over 40 booths from various organizations and churches showing solidarity for gay rights.

Small town drag show that's not in a bar. Kids in the audience. Has a family, folksy feel with a lot of heart in the community. It's at the Bellingham Gay Pride Festival in Depot Market Square; also home for Farmer's Market on other days. The Gay Pride Parade and Festival brought people from many walks of life. Betty Desire was one of several performers that day. Betty's son was also in the audience (from an earlier marriage) and believe it or not he has a grand child in California. 1 minute 15 seconds. 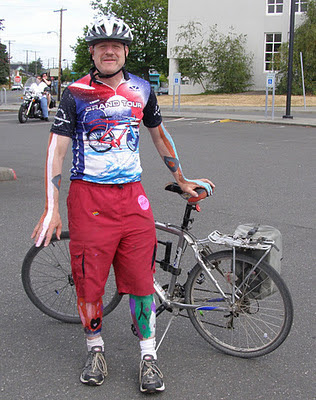 Of course, I rode my bike in the parade. Notice painted legs.

Labels: bellingham, bellinghampridefestival, picture of me

After Supreme Court decision Making it harder to Integrate Schools

Talk shows have been buzzing. John Rothman expressed outrage about the ruling on his KGO show. I often feel like talking back to the radio, but I'm not very articulate on the phone.

Really, the best way to create racial balance in the schools is to better integrate the neighborhoods.

I've never been a big fan of busing, or other "band aid" solutions that attempt to integrate society on the backs of the children. We really need to mix the neighborhoods more.

Restrictive "single family" zoning can be a problem. Maybe racial integration would be easier, if we attempted "income integration."

Rather than taking kids away from neighborhood schools, so they can't stay for after school activities, it's better to create a mix in the neighborhoods around the schools. Also complies with the current mood of Supreme Court which seems to be nixing the idea of using race as a criteria for determining school enrollment.

I'm not a fan of the conservative Supreme Court, but I do think there is a better way to integrate our society, than just tossing the entire burden on the schools, or trying to do this solely on the backs of the children.

Saves energy if there is less "busing" also.

There are environmental reasons for more mixed use zoning as well.

Pedestrian advocates talk a lot about this. Being able to walk to destinations.

If there is nothing but "single family homes" as far as the eye can see, it doesn't make for an interesting walk. How about having a small business, where one can stop for refreshments along the way? How about being able to walk to one's job, rather than having to drive?

With houses starting at 1 million dollars in many neighborhoods that were considered "average middle class" not that long ago, something needs to change.

If the cleaning lady can live in the neighborhood where she works, she can trust the "upper class" more. Also she saves time in commuting.

Who knows, she can participate in your community, take classes and even be on your board of directors. She just has to be able to afford living in your community.
Posted by Theslowlane Robert Ashworth at 5:13 PM No comments: 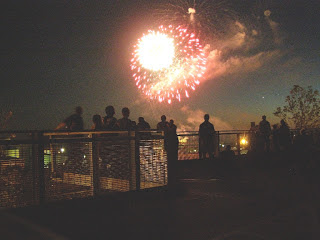 Notice the dim dot on right near tree. That's Venus! (I think).

Just got around to putting my images on-line, from Bellingham 4th of July fireworks.

I know, lots of people upload fireworks this time of year.

The 4th is over for another year, but there is still celebration. Bellingham's Gay Pride Festival is coming this weekend.

Sunday, July 15, Noon to 5 PM at Depot Market Square (where Farmer's Market is held on Saturdays).

Actually there are events for Pride this entire weekend. Bellingham is coming more of age when it comes to the "urban trait of exhibiting diversity."

Just Before Roll Out Day for the Boeing 787 Dreamliner

Someone calls talk show and says this new light weight plane which is made using carbon composite material will not reduce the greenhouse gas emissions that it is touted for.

Because even more people will fly.

Lower fuel costs can make air travel less expensive so there will be more air travel, thus wiping out any savings in greenhouse gas.

It also depends on what the people would be doing if they weren't flying.

The main reason why I biked across USA was to see more of America than the in flight movie, but I am not against flying.

I have flown before. Several times, but not since the 1980s.

One flight was on a small plane with "every seat a window seat." Seattle to Pullman, WA. Clear day and Cascade snow cones were visible from Canada to Oregon.

Fantastic, but that joyous trip only lasted a bit over 1 hour.

Since then, I haven't had occasion to fly. Living in the slow lane.

By bicycle, the scenery can last 6 days, but it's not quite so intense. Takes patience.

I ask someone what it was like to fly over a blanket of thick clouds. To be in sunshine, but look down on nothing but clouds. He said, "it's very interesting, for about 5 minutes."

Still, I do like most technology. It's kind of exciting to have the first, basically non metal plane. Actually, I guess there was the wooden Spruce Goose.
Posted by Theslowlane Robert Ashworth at 6:36 PM No comments:

In-filling is good, but it doesn't automatically curb sprawl

Here in Bellingham, in-filling the city is being advocated to reduce sprawl in Whatcom County. At the same time, many anti growth advocates fear that we will get both in-filling and sprawl.

I am an advocate for density, but I realize these anti growth naysayers might have a point. In-filling and sprawl can happen simultaneously.

To curb sprawl, there would need to be strict land use laws in the county. Watershed preservation, farmland preservation and so forth.

That could reduce new housing construction in the county. Then Bellingham would need to do in-filling in order to maintain some affordability of housing in this area. Otherwise there could be a shortage of housing if population keeps growing.

Also the county could do a version of in-filling itself. By encouraging clustered housing. Pockets of density rather than sparsely scattered 1 and 5 acre lots filling up the entire area.

The towns in the county can in-fill as well.

County and city planners talk about this, but the hardest part of this task is getting average people to cooperate.

People are slowly changing and the lifestyles that go with in-filling are getting more popular. Things like "car free" living are gaining appeal.
Posted by Theslowlane Robert Ashworth at 5:31 PM No comments: