Several Years Ago in Bellingham. A bit too Confrontational, but Good at Heart.

Most Critical Mass rides are a bit too confrontational for me. The costumed cyclists will often take up all the lanes, on a multi lane street like Holly in Bellingham.

More people would see costumes if cyclists only took up one of the lanes. Then motorists could pass a long string of colorful cyclists.

Taking up all the lanes means that motorists just see the backs of other cars. Maybe this is not as effective?

It's just a thought.

Anyway, I don't mean to be too critical of the Critical Mass movement.

Some would say it is the duty of bikes to slow all the cars. It slows society down a bit, even though tempers may rise.

Several years ago, on Buy Nothing Day, a group of colorful cyclists headed out from downtown Bellingham. I went along for the ride, even though confrontation is not really my goal.

Telling people about the peaceful times I have on my bike tours is more my style. It makes them jealous; especially after they notice how much gas costs these days.

Soon the line of cyclists came to a stop. Police were arresting one of the ring leaders who placed his bike across the intersection, signaling traffic to stop, while others went on through. His bike was impounded.

A controversy ensued as the activist was knocked off his bike by the bumper of a police SUV.

After this, the police cars were less evident and they were replaced with bicycle cops. Possibly this was an attempt to "soften" the police presence to reduce confrontation.

Next stop was Jerry Chambers Chevrolet, on Northwest Avenue. Insults were chanted across the ocean of new cars parked on the lot.

I don't think any of the customers, or staff, noticed.

The ride proceeded on.

Last stop was Bellis Fair Mall. Slogans were chanted in favor of Buy Nothing Day. Some thoughtful conservations took place with mall shoppers.

Eventually mall security passed a message along to the bicycle police asking them to disperse the group.

This was a few years ago.

I like many ideas that Critical Mass stands for, but the style is more confrontational than my style.

Still it does take many kinds of voices to bring change.

I say, good luck to Critical Mass. Just remember, more people would notice the costumes, and color, if the ride just took up one lane.
Posted by Theslowlane Robert Ashworth at 1:40 AM No comments:

The elephant is, "are we going to be able to afford all the health care needed to stay alive as the post war baby boom generation reaches retirement age?" Health insurance going up in price, corporations dropping their plans, government in debt, will social security be enough? These are important questions. The true elephant in the room.
Posted by Theslowlane Robert Ashworth at 4:20 PM No comments: 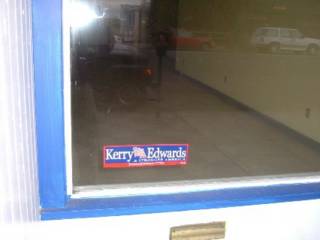 Making the case for a sustainable economy is a bit different than just trying to win the next election. There may be time to develop this vision before the next election. People might buy it if it looks like the road to a brighter future.
Posted by Theslowlane Robert Ashworth at 5:17 PM 2 comments:

We only vote for President once every 4 years. Other elections once a year or so. We vote with our wallets every day.

We also vote by how we spend our time.

Are you spending time with friends, shopping at the mall, taking a walk, watching TV, going to the movies, consuming more, consuming less, driving to destinations, taking the bus, riding a bike?

Are you buying from companies that treat the world, and or their employees fairly, or paying just their top executives too much. Are you buying local or "out sourcing?"

There is great empowerment in pondering these questions? Voting for political candidates just doesn't happen often enough. Our wallets and our time are more powerful tools.

On a talk show, I heard them discuss the oil aspect of the Iraq war. How oil has, at least in part helped to plunge that region into war.

A caller ask this intriguing question:

"Can there be Fair Trade oil ?"

The studio guest thought that was an interesting concept and didn't know if such an entity exists or not.
Posted by Theslowlane Robert Ashworth at 2:46 PM No comments:

I have kept all letters to the editor, I wrote over the years. About 130 of them by now.

As I catalog them, it is fun to look back over what I said.

Now that the media is full of commentary about soul searching among Democrats, I remember similar "soul searching talk" after President Regan's victory in 1980. People were asking, "can we find an alternative to the nonsense of main stream culture?"

A letter that I wrote, in the Bellingham Herald, around 1984, caught my eye. It was during Mondale's run for President in 1984, not long after someone named Gary Hart lost the Democratic nomination. Mondale ran against Regan's second term. This was soon after Chrysler corporation was saved by a federal loan guarantee. Here is what I said:

Mondale's support for the Chrysler bail-out is one more example of the Democratic party's right hand not knowing what its left hand is doing. When the right hand bailed out Chrysler; it must have hoped that car sales would improve, so Chrysler could recover from its slump and pay back the loan.

While the right hand was betting on an auto sales recovery, the left hand was busy asking Americans to drive less. The left hand wants to reduce this country's consumption of oil and other nonrenewable resources. It does this by supporting public transit as an alternative to car travel, passing environmental restrictions which often get in the way of oil production and replacing parking spaces with pedestrian plazas.

I have never figured out how the Democrats thought car sales would improve while they were also taking steps to reduce this country's love affair with the automobile. Gary Hart's vote against the Chrysler loan seems to be more consistent with the ideals of protecting the environment and saving oil.

I guess, if we really wanted to save Chrysler; we should have supported Reagan. Since Reagan has taken office, there has been a dramatic increase in car sales. Reagan's policies; which have lifted many environmental restrictions and opened the way for more oil production, have given the auto industry the boost they needed most, stable gasoline prices. Also; the break-up of the OPEC oil cartel and the shift of international power back in favor of the United States has lowered our fuel prices.

Car sales are up and the Chrysler loan did succeed, but I still wonder if this was a good thing in the long run. Should we really go back to the days when fossil fuels and the automobile were king ?
I would have rather had someone come up with different ideas; such as supporting better rail service.
Posted by Theslowlane Robert Ashworth at 6:41 PM No comments: