When getting a raise means going back to minimum wage

I used to make a bit more than minimum wage, but at the first of the year, I got a raise, back to minimum wage. How did that happen? Washington State has now raised minimum wage to $11 per hour. Before that increase, my wage was a bit above the minimum. Now it's higher, but it's the new minimum wage. It's a struggle for some businesses to pay higher wages in an environment of low prices for many goods and services. The wage works for me as long as my rent remains reasonable. I have reasonable rent. Housing cost is one of the big factors people struggle with. Property prices are often in a different world than the rest of the economy. I'm fortunate there also as I haven't been hit by that situation. My landlord is a non profit organization that strives to be reasonable.
Posted by Theslowlane Robert Ashworth at 2:33 AM 1 comment:

Why take on student debt for funky jobs?

This episode of 1A (new show in Diane Rehm's old time slot). It's about the burden of student debt. One of the guests was financial adviser Michelle Singletary. She suggests being modest in one's college choices to avoid racking up too much debt. She said, don't necessarily go for prestige of schools such as Harvard. Sometimes community college is sufficient.

I was fortunate to have not racked up any debt. Back in my college days, Tuition was a lot lower in state schools at least. My parents paid the bills on a normal middle class salary. I graduated with money in the bank. Not lots of money, but a bit of savings from gardening jobs and my childhood paper route.

It's just as well that I had no debt as the job market has always been pretty soft for me. With my way paid and little work experience, I started out by doing odd gardening jobs which eventually led to a part time custodial job at a pizza parlor. My parents were still proud that I was able to achieve self sufficiency at least. They had been a bit worried.

Rents were reasonable as I started my "career" and I had an upstairs neighbor who spoke about the virtues of part time work. It's a balance between quality of life and paying one's dues. I went with that advise as I couldn't find full time work anyway. Even "good" custodial positions for the state (like at Western Washington University where I graduated from) required a ton of qualifications. That was the Bellingham of the early 1980s.

I got into the pattern of working part time, going on long vacations and expressing myself in ways which usually don't pay the bills; unless one is a big celebrity; like Justin Bieber.

Now I'm working closer to full time and things are basically okay. My writing, ideas and photography are donated to Creative Commons. Donated, in part, because who would buy it?
Posted by Theslowlane Robert Ashworth at 2:28 AM 1 comment: 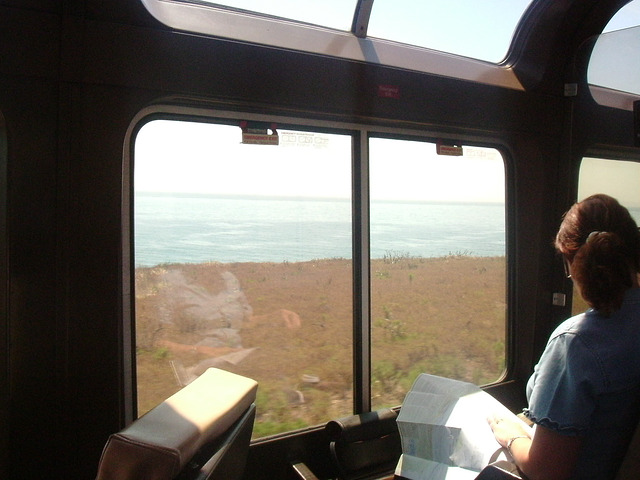 Large cuts being proposed to Amtrak just in time for that video of the guy being dragged off the United Airlines flight to go viral. Unfortunate timing.

I guess Amtrak is less efficient than airline travel cause it takes much longer to get there. Longer duration of trip equals more use of staff time per passenger mile. Amtrak does get a federal subsidy. Airlines get some of that also; the air traffic control system and airports. Most countries do subsidize their transportation systems.

Amtrak costs less, in terms of energy use per passenger mile, but the high cost of labor "Trumps" the low cost of energy, in economic thinking and Trump is proposing the big cuts to Amtrak in his budget request. For environmental thinking; another story. The true cost of energy matters for the environment.

Then there is culture. The trip on an airline is often thought of as something to endure just to get to the destination. Maybe this doesn't have to be the case, but as the United Airline situation illustrates, airlines are getting leaner and meaner.

Amtrak isn't perfect either, but it's a bit of a different philosophy. The trip can be part of the experience. Takes longer, but more comfortable. Train travel can be an enjoyable social setting as passengers mingle in in places like the observation car. The view is sometimes interpreted by a volunteer naturalist who comes on board.

Being more in the slow lane of life, myself, I haven't had occasion to fly since the 1980s. Did enjoy the bird's eye view, however, on a small plane from Seattle to Pullman where every seat was a window seat. I've ridden Amtrak quite a few times more recently, in connection with my bicycle travels.
Posted by Theslowlane Robert Ashworth at 2:57 AM 1 comment:

A mistake that was kind of a technicality. Saying Hitler didn't even stoop so low as Syrian President Assad in using chemical weapons when, in fact, Hitler did use chemical weapons in the concentration camps. I've never been a Trump supporter so it's funny to see his staff stumble, but I do kind of get the valid point that Spicer was trying to make. What Assad has done puts him into the category of Hitler.

As for Holocaust denial, it wasn't that long ago that former Iranian President Mahmoud Ahmadinejad called the Nazi Holocaust a "myth" of European Jewry. Things can be like Hitler in today's world; especially in the Middle East.

Part of my own tribe of "liberals" is making a big deal out of this verbal slip up, which is what journalists and Twitter folks like to do, but in the long run, it may not be that substantive an issue.

A more substantive issue is something like the huge cuts to Amtrak train service that are proposed in Trump's budget request. Amtrak may be taken away from over 200 communities; especially rural communities.
Posted by Theslowlane Robert Ashworth at 2:56 AM 3 comments:

If Syria could just be livable, that would be best. Taking in refugees, plan B.

A passive way to deal with the atrocities, in Syria, is to take in more refugees. The US could take in a lot more than it has, but this can still be problematic. Too many refugees can be overwhelming to a society. Europe, not to mention other Middle Eastern countries such as Jordan, has taken in many more refugees than the US and is experiencing some problems. Another term for problems is growing pains.

Here in USA, without even taking in large numbers, many of our prosperous cities are experiencing housing shortages and a rising cost of living. We could reduce the percent of land, in our metro areas, that's locked up into single family residential zones. This could even improve living, tho that's a matter of opinion. Many folks still fight housing density, tho it doesn't have to be a disaster, if planned right.

Another problem with the strategy of taking in refugees is that many of the refugees would actually prefer to live in Syria, if only it was livable. Many of them don't necessarily want to relocate clear around the world away from familiar territory if they could just be able to live in peace in their own homes.

It's hard to know what's the best strategy for solving the problems in Syria. Many are saying that the Syrian situation is being exacerbated by drought related to climate change. There's 7 billion people on this planet and it looks like climate change refugees could become a wave of the future. We have to learn to plan and live differently.
Posted by Theslowlane Robert Ashworth at 2:36 AM 1 comment:

If you want to protect the unborn, you have to walk through the doors of the undocumented

Quote from Bishop Tyson, head of the Diocese of Yakima that stretches across seven counties in central Washington State. Quote in a very thought provoking interview on Northwest Public Radio. If you want to protect the unborn, you have to walk through the doors of the undocumented. He says 80-90 % of Catholic pregnancies, baptized in Central Washington, are Latino.

Interview points out the hypocrisy of many folks in the Christian Right who talk about pro life, but also talk about building a wall on the Mexican border. At the same time, I do feel that our growing population does present challenges including effect on the environment

Personally, I think we need more birth control and less pregnancies world wide, but when people are born, a civilized society welcomes our neighbors. Christian teaching, such as expressed in Christ's Sermon On The Mount, can be an inconvenient truth. Good planning is important for things like public transit, instead of more traffic. Also keeping housing affordable as we accommodate growing population.
Posted by Theslowlane Robert Ashworth at 6:42 AM 1 comment:

Could be better to say "power amplifies" rather than "power courrupts"

I still think Obama was a good president, as presidents go, but being in charge of the world's largest military has consequences. Mistakes can be made, down the chain of command, of which some folks will hold the person at the top responsible. The problems come with the territory. It would be nearly impossible to be President and not have things go wrong. The larger amount of power one holds, the larger the catastrophes that can happen. Some folks say "power corrupts," but I have a different twist on that phrase. I say "power amplifies." Mistakes made by the most powerful military in the world can be big mistakes, but ordinary people make mistakes everyday. For instance; behind the wheel of an automobile that can also lead to death.

The friend I was talking to said he voted for Obama, but is now disappointed and would never forgive Obama for this. I feel this is another case of circular firing squad. Obama, Hillary Clinton and the so called Democratic establishment were not perfect, but look who is in that position now. Donald Trump; a far more reckless person.

Some folks feel Obama should have done more to pull us out of Afghanistan and reduce the size of our military. Could be, but if he would have tried that, Congress would have, most likely, stopped him. They would have even had him removed from office. Also a large portion of the American people would have stopped him. The problem is people being guided by fear, rather than trust. Disarming a big part of our military brings up the same kind of fear that notice of a sex offender moving into one's neighborhood can bring. Fear at the grass roots level.

There is a trade off when someone takes a position of high power and high responsibility. It's easier to be more idealistic when not fully engaged with our tainted world.

That brings up a problem with the Nobel Peace Prize, itself. It often goes to someone prominent in the news. Obama got it just 12 days after taking office so folks felt he hadn't done anything to deserve it yet. Another controversial prize was in 1994 when Palestinian leader Yasser Arafat got the prize along with Israeli Prime Minister Yitzhak Rabin. Also prominent figures.
Posted by Theslowlane Robert Ashworth at 5:17 PM 1 comment: