I thought of a cartoon idea, while talking to a friend. Car driving toward a brick wall with driver saying, "stay the course."

My friend said I should submit a cartoon to the Bellingham Weekly. My illustration skills are marginal at best, but it's and idea.

Then another friend entered the conversation.

He said, "that was today's political cartoon in the Bellingham Herald."

What a co-incidence. No I hadn't seen the Herald yet.

The Herald cartoon was not a car, but a boat headed for the waterfall. One rower says, "I'm staying the course" while the other says, "We could use a flip-flopper." Cartoon was by a Mike Luckovich, from Atlanta Journal Constitution.

I like the idea of changing course, in theory, rather than always being bull headed. On the other hand, I don't necessarily think the US should "get out of Iraq yesterday, if not sooner."

On the Iraq war, I have always been a "fence sitter."

There are arguments in favor of trying to bring some sort of democracy to Iraq as well as arguments against it.

Being decisive may be impractical, for me, at least.

How is that for hedging everything?

By the way, tonight is the first presidential debate between Kerry and Bush. While I lean in favor of Kerry, I don't see Bush as the embodiment of evil. Both Kerry and Bush plan to stay in Iraq, for the time being at least.

On the other hand, it's not a very good situation. Someone needs to introduce new ideas, like reducing our dependency on foreign oil.
Posted by Theslowlane Robert Ashworth at 4:53 PM No comments: 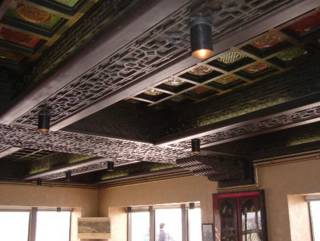 Now, the observation lounge is a nice asset in downtown Seattle that is open to the public. Ticket price for the elevator, $6, last I knew.
Posted by Theslowlane Robert Ashworth at 3:51 PM 1 comment:

Presidential Candidate John Kerry gets a lot of flack for, supposedly, being a flip flop on issues. In other words, occasionally modifying, or updating his position.

If Bill Gates never changed his tune, wouldn't we still be using the early versions of DOS?

Kerry defends himself, saying he really isn't a flip flopper.

Isn't that letting the Bush people set the agenda? Who invented the concept that changing one's position, every once in a while, is necessarily bad? Even a military strategist will realize that plans evolve as circumstances change.

Is this flip flop or flexibility?

Kerry does get a lot of flack for flip flop, but maybe he can say, "Flexibility." All these words do start with an "F."

Some people might think I am just trying to put a good spin on a dangerous thing.

I still have to ask, "who ever said one must always be rigid?" "Isn't it good to turn the wheel when one is headed straight into a brick wall?" Even for the sake of our nation's defense, flexibility can be an asset.

What kind of building withstands an earthquake? Rigid brick or flexible steel?

I would ask, "why is that irrelevant?" Who are we allowing to set the agenda for discussion?

Maybe flip flop isn't the end of the world. To put a better spin on this, call it flexibility.

Of course none of the candidates has hired me as a consultant.

No wonder we get politics as usual.

I still vote for Kerry, but we really do need new paradigms for the discussion.

Yes, I am a little tired of hearing Kerry and Bush keep regurgitating that Vietnam War as a campaign issue.

Defending the homeland is important, but who said flexibility, in strategy, is bad?

Aren't we trying to prevent fanatical fundamentalists from harming us? Why do we let them set the agenda?
Posted by Theslowlane Robert Ashworth at 7:08 PM No comments: 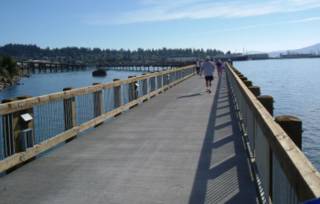 The new walkway south of Bellingham's Boulevard Park is done. Connects the park to the old Taylor Street Dock. I don't use it often if I am just trying to bike to the south side of town. Crowded with strollers, I only use it if I am in the mood to take in the view; poke along. For a more pragmatic bike commute, I use access road out of the south end of the Boulevard Park parking lot. Then head south on Tenth back to the trail. 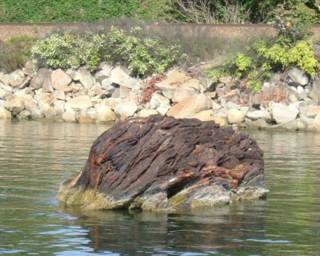 This is not a normal rock, seen between the shoreline and the new walkway south of Boulevard Park. Early in Bellingham's history (so I heard) a big cannery swept tin out the back door, over a period of years. The pile bacame a tiny tinflake island.

One can swim out to this island, but the flakes of metal are sharp. It is easy to get cut sticking your hands here.
Posted by Theslowlane Robert Ashworth at 8:22 PM No comments: