Not quite World Naked Bike Ride In Bellingham. First try in 2004.

I, personally, wasn't planning to go totally naked (knowing this is Bellingham), just skimpy shorts and body paint. Posters called for both naked and costumed riders which would have been fun to see. Pictures below.

Update. More recently, another bunch of folks have organized rides in Bellingham starting in 2009 and continuing till the present. See here.

Many cities around the world have naked cycling events. In Seattle, there was a group of painted, naked cyclists at start of the Fremont District Solstice Parade. Other cities like Toronto, Vancouver have their events. What about Bellingham?

I thought about traveling to Seattle, but saw some posters for
World Naked Bike Ride in Bellingham. Can this be? Isn't Bellingham a bit reserved? Hidden?

I decided to "stay local" and see if anyone would even show up.

The poster described this as a costume ride in celebration of WNBR.

Knowing that public nudity is illegal, I wasn't planning to go nude. Just taking one's shirt off, or painting oneself, could be considered radical in Bellingham. Of course one does see lots of shirtless Frisbee throwers, and so forth, in city parks. Hot days can be rare in this area; except maybe late summer.

Not surprising at all, about the first person to show up was an officer from the Bellingham Police Department. They saw the posters too, I guess.

Striving to maintain a friendly demeanor, the officer was asking questions about this event, orienting himself as to what was planned.

As a few more people showed up the officer started explaining laws about public nudity. If I remember correctly, it's a misdemeanor, but when someone 14, or under, sees this, it can be a felony.

There was no problem with that, as far as the law was concerned.

Just then, my friend Rick showed up having watched the Fremont event in Seattle. Yes, indeed, there were totally naked cyclists in that parade. Families even brought their kids and baby strollers. They were watching. It was relaxed. A festive atmosphere in the big city.

I commented that it was probably good for the economy. Vendors and Fremont businesses did well from the celebration.

We marveled at the contrast between the Fremont Parade and Bellingham. I am not sure how the public nudity laws are dealt with for the Fremont event. Some kind of politics must have been worked out ahead of time.

In spite of the legal damper, and the fact that there wasn't a huge turn out, several shirtless painted cyclists were gathered. We rode down the South Bay Trail from our starting point outside The Hub bike repair collective.

Awaiting us was dancing at Boulevard Park. That was another event.

I think I was the only painted cyclist to join in the dance for a bit. 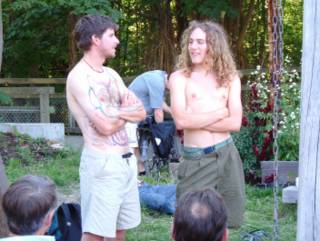 Starting to get ready.  Click on photos to see larger versions. 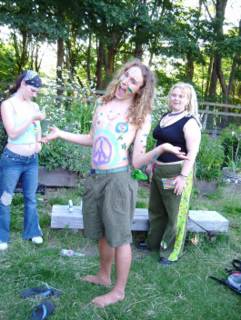 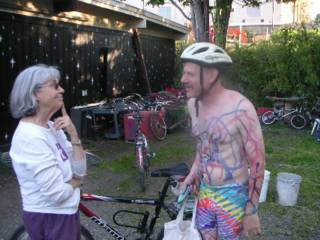 That's me with loud shorts  Click on photos to see larger versions.

Participants often say these rides are to protest the indecency of over consumption and oil dependency. Making this point with naked riding may be a stretch, but one can sort of follow (I hear Rush Limbaugh laughing in the background).

I don't know what the connection is for other cyclists, but for me it goes this way.

There is a certain amount of indecency in the way most people approach things like dating, relationships and socializing. Much of it revolves around possessions. possessing one's partner, the toys one must have to play the game. Consumption of alcohol that takes place in establishments where people go to socialize.

I prefer a more aesthetic approach. Standing back and enjoying the dance of life with out having to own it. For some reason, the conversations that take place around some nude hot springs are more intelligent than other gatherings.

Cyclists can be appealing as they pass through my vicinity; lean and healthy.

I guess I am looking for a selfish reason to promote cycling. Saving the world is okay, but most people aren't motivated because the affect of one person is hardly a drop in the bucket. Saving one's own health is a more tangible sell?

Think of how much money Americans spend on things like diet aids, hair dye, clothing, all for the appeal, and of course, the car one drives. "It's the shape you want to be in."

Cyclists are usually lean and healthy just from the cycling lifestyle.

Speaking of shapes, when I was a kid, the family car was a STATION WAGON.

In the 1980s, as families and relationships demanded more, the station wagon got taller; a MINI VAN.

Soon the mini van got more sporty and fun, the SUV.

What's next? Maybe the more armor plated HUMMER to keep it all going?

Not to mention troops in the middle east for oil supply, the Hummer might be needed to plough through traffic.

Or there is the naked cyclist, even just lightly clothed cyclist. We survive by not being in the traffic pattern of main stream life.

Article about that ride in a small newspaper, Bellingham Sun 2004.
Posted by Theslowlane Robert Ashworth at 4:31 AM

don't worry
- i first thought about, then done it !

i found your wonderful & intellectual website through the way i commonly
browse the web :

i'm employing a hidden webcounter on my own pages, and i'm surfin on the
searchengine inquiries of my visitors, which provides maximum web fun.

i'm also issuing a bikers page, but one of the more special kind :

how to ride in the buff :-)
how to do it and how it is and how it looks alike

the site is mostly in german with a german texted message board (also open to
english speaking posters), but i'm issuing certain pages in english, i.e. the
weblinks. pardon me please for my poor translation work.

your site is not featured as a nude cycling site, cause evidently we couldn't
find any nude cycling, but it's now featured and commented as a site, where
my heart belongs to :-)
(along with a milk marketing website, in the german link list, and a candy
manufacturers fantasy site in both english & german listing)

my own site is different from your style.
it's also not a personal but a monographic page, dedicated to one subject.
for american sight it may be also kind of shameless.
that's me :-)

i'm a gay cyclist without car, too, and i totally agree to your opinions about
the differerent perception from cyclist perspective, about slow & fast, about
gay life & spa life (i'm living in a well reknown european spa town, in the
black forest at river rhine, which is known as Baden-Baden), as well as bout
sports, dieting, political economics.

it has been great pleasure to study your pages.
your style - full text articles with 1-2 pics - is a really nice design for
people who love to read papers :-)
really great work - well done !

i've not yet finished, even i spent many hours on your domain.

btw:
the intention of this mail is just to let u know ( you obviously could also
detect it through your usertrack-software), not a request to set any link to
me back.

nacktradeln.de ('nekkid cycling') is generally a european thing - no one in US
can apply the things discussed there, i know, i know..

thanks for publishing your thoughts in that large-hearted manner !