Living in a room without a million dollar view, but contemplating astronomical things 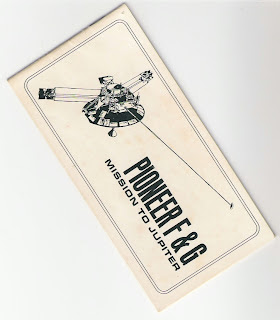 I can still see fantastic views from space, on the Internet.

Back when I was in high school, I got this brochure about Pioneer 10 and 11 spacecrafts. First to fly past Jupiter.

Pioneer 11 went on to Saturn.

First artificial objects to pass out of solar system. Launched in the early 1970s.

Internet is so much richer than relying on mailed brochures, or a daily newspaper that would often hide space news behind the sports page.

Since Pioneer, two Voyager spacecrafts have ventured out following similar routes. Launched in the mid 1970s.

I think Voyagers are going faster so they are already farther out than the Pioneers.

Also the Voyagers are still sending back signals. They are now exploring the area where solar wind transitions into the "interstellar environment."

Other stars are far out there indeed.

Traveling at Voyager's speed, it would take around 80,000 years to get to another star, but we can still learn about other stars from the rapidly improving telescopes here at Earth.

People might call the astronomer an "ultimate voyeur." Yes, observing and things are often too far away for interaction.

Nothing wrong with that, there is a passive aspect to contemplating things beyond everyday life. Interaction does happen, here on Earth, among scientists and people asking cosmic questions. Often that's "interaction at its best." 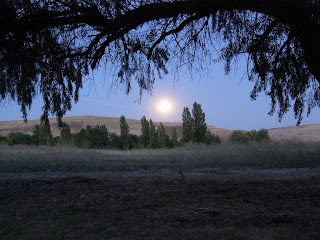 Bush wants us to go to Mars. People on Mars, but I don't think it's a good idea. Less scientific "bang for the buck."

I'm more interested in spending money for new telescopes, here on Earth. Also in Earth orbit. New telescopes that might actually see planets like Earth around other stars.

Imagine what wonderful conversations might take place in the sauna about such discoveries.

Mars doesn't seem that interesting, except for exploration by unmanned and inexpensive robots. Rovers like Spirit and Opportunity that are now serving nobly on the Red Planet.

Colonizing Mars may not be much help. It's kind of a "cheap version" of Earth. Only about 1/3rd the size of Earth.

By the time we would colonize, population growth on Earth will likely be more than 1/3 larger.

We will have already outgrown Mars before we get there.

Someday we'll set human foot on Mars, but I'm not holding my breath.

Back home, we are entering an era of even more exciting astronomical discoveries.

Here in the state of Washington, they are working on LIGO; a gravity wave detector.

LIGO is opening up yet another frontier of discovery. Picturing the universe in gravity waves.

Our LIGO detector is inside the Hanford Reservation; a place noted for old nuclear reactors and the "Hanford Cleanup."

Hanford can mean more than just "cleanup after nuclear activity." It's also a research facility for the future.

There's a lot of dry space out there and potential for exciting projects.

There's also a LIGO detector near Livingston, Louisiana. More to Louisiana than Hurricane Katrina. More to Hanford than "oh what a mess."

We can still look forward to a brighter future.

Last weekend, I saw a great video about LIGO. Called "Einstein's Messengers." See LIGO page and video should be one of the links.

With so many wonderful views on my computer screen, who needs a million dollar view out the window. I can ride my bicycle to such a view in a matter of minutes anyway.

I'm not motivated to buy my own telescope since it's images would pale in comparison to photos from something like the Hubble Space Telescope.

Small scopes might be good for watching things and people, here on Earth. Some might call that voyeurism.

Nothing wrong with that.

Years ago, I once had a scope that I used in the park. When I came home, I set it on a table near my window just to put it down somewhere. Wasn't using it in my home, but neighbors across the street saw it sitting by the window. They put a sign in their window reading:

Some of the best interactions in the park come from people standing around telescopes. Astronomy clubs have outdoor gatherings. The passersby who stop for a look get into more discussion. 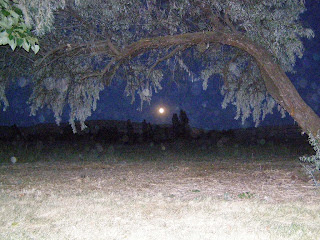 The moon with camera flash turned on to shorten time exposure; automatic camera, or I forgot how to do it manually.

When I was in college, our astronomy class met on top of Haggard Hall for a sky viewing session.

A small telescope was all Western Washington University could afford in those days.

Still, we saw some things.

The rings of Saturn, but they are actually more interesting in textbook photos.

Back then, there were textbook images from the 200 inch reflector on Palomar Mountain.

Our little telescope on Haggard Hall was no match. Still, we were seeing with our own eyes, what ever that's worth.

Now we have the Cassini Spacecraft orbiting Saturn.

From the top of Haggard Hall, I suggested we look at things on land. Was wondering what Bellingham would look like in a bigger telescope than, at least I, could afford.

We wouldn't have to peer in windows, let's just look down some street.

My classmates adjusted the scope so it pointed at a Bellingham neighborhood. Then they said, "We have discovered a pulsar!"

It was the beacon at Bellingham Airport.
Posted by Theslowlane Robert Ashworth at 8:31 PM

If you're interested in the LIGO project, you might want to sign up for Boinc (Berkeley Open Infrastructure for Internet Computing). You can participate in the search for gravity waves and a variety of other interesting projects with Boinc including SETI and AIDS. It's a screensaver that crunches research data for these projects when you're not using the computer, or optionally even when you are using it. There are around five million participants which makes it the most powerful distributed supercomputer in the world. The LIGO version is especially interesting because the screensaver shows a real-time map of the sky and you can see where the elements of the telescope at Hanford and in Louisiana and Germany are aiming at any given time. Check it out.

Good suggestion. I've heard about this and other distributed computing projects.

Maybe not for me as living in my room the lights often go out when my neighbor across the hall plugs in too many things.

I shut down my computer while away.

Also, for folks leaving the computer on all the time, good idea to check the CPU fan every once in a while. After a friend of mine had their CPU fry, they opened up the case and found the CPU fan clogged with dust.

Good idea to clean out the dust every so often.