One way religions give religion a bad name 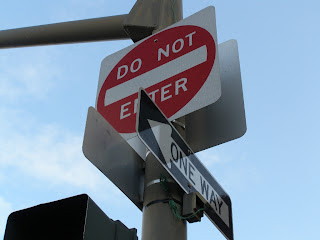 Back when I was in high school, they opened up a new bookstore in my home town called "One Way Books." It was from some kind of "Christ is the only way" outfit.

Not knowing any better, my dad thought it was named that to imply "you can't take back any merchandise." "One way, you buy it, no returns." No standing behind the product, so to speak.

Well, that's not quite the concept, but it's pretty good.

Before One Way Books, that little store was another store entirely. It was a hippy outfit called "The Bodywrapper." I'd see sexy long haired guys going in and out of there and the name Bodywrapper was kind of alluring.

Some of my early gay fantasies, just thinking even though I was never in there, except once.

The only time I was in there was with a friend who wanted to check out the waterbed in the basement. Just a fun room full of black lights and a waterbed and you didn't have to be buying anything to justify your existence there. That wasn't a sexual experience, however.

I remember lots of flickering lights and black lights. Oh, the early 1970s.

Bodywrapper eventually moved to a more sterile location in downtown Pullman. It was, basically, a clothing store. One Way moved in after Bodywrapper moved out.

In early 1970s, "One Way" became a slogan of the Jesus Freaks, as they were called. A new more conservative movement. Kind of an answer to the hippie movement. I remember thinking it was based in Spokane, WA. Not sure if that's true, but people said it was "something to put Spokane on the map like hippies put San Francisco on the map."

My art teacher referred to these people as "Freazes Cheeks."

Jesus Freaks often quarreled among themselves over interpretation and who's definition of "the way" was the real one. Now it seems like much of the world, especially the Middle East, is caught up in such quarreling.

I believe there is divine nature to this universe, but there are a lot of pathways in that direction.

Old building where the Bodywrapper and then One Way Books resided was later replaced with a Burger King. Now, even that's gone, I think from that location at least.
Posted by Theslowlane Robert Ashworth at 3:59 AM

I love your Pullman-related postings. I grew up there too (graduated from PHS in 1987). I'm on blogger too, with a blog for ex-Pullmanites who want to share their stories about Pullman. It's called Warm Earth Writings. Please keep writing more about growing up in Pullman - it's jogging my memory! - Jana