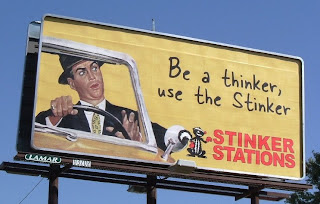 Yes there really is an oil company in Idaho named Stinker. Billboard seen near Lewiston, ID. on my 2005 bike trip around Pacific Northwest.

The best way to deal with excessive salaries of corporate executives in most industry (not just oil) is to increase income taxes for the top tax brackets.

Oil companies are a good example of where personal income taxes can help the public sort out the economics. An oil company can have lots of capital expenses, like building new refinery capacity to keep up with rising demand. Profits can be invested into new refinery capacity, but they can also be siphoned off into executive perks.

Personal income taxes can discourage the perks while still allowing profits to be used for capital investment in the company. This might help our cynical public determine where the money is really going.

Many of the rising expenses of oil companies are legitimate, but when one sees the huge salaries paid to executives it creates distrust.

There are a lot of legitimate reasons why gas prices are rising. The world is reaching so called "Peak Oil" production. After this, production falls but demand keeps rising. Prices go up.

The best way to reduce oil prices is to cut demand. Not just US, but China, India and other places keep using more oil.

I'm sure you've heard all this before.

If we go into a recession, prices are likely to come down as demand cools. Prices would come down for a while at least.

Some right wingers say, "don't tax the rich, it will reduce incentive to get rich and bring on a recession."

Well, a recession can lower prices.

Here's one interesting aside. Not everyone's work is motivated by money. There are business owners who make less than their employees, but they are still motivated by the challenge of having one's own show. Higher income taxes might not always mean less incentive for this reason.

I've never driven a car. The bicycle is my main means of transportation. I always have to throw that tidbit of information in here.

For those who insist on driving, nuclear power and electric cars is one possible scenario. Another scenario is more solar energy and windmills.

Speaking of taxes, with-in our oil/car based economy, I've been hearing about some bad tax policies.

They were talking about the tax break for SUVs on Gene Burns evening talk show over KGO radio (April 3).

Amazing what lobbyists can dupe Congress into. Tax incentives to buy SUVs which burn up more gas and lead to higher fuel prices?

Bad idea, but it does create jobs for someone. Detroit unions, automakers?

I hear that some recent survey showed the majority of Californian's say it is a good idea to base the price of car registration on fuel consumption. Guzzling cars pay more, fuel efficient cars pay less.

That's good, but here in Washington State, voters did the opposite a few years back. Tim Eyman's Initiative 695 attempted to lower license tabs to $30 for everyone; thus eliminating any difference between cheaper and more expensive vehicles.

Many of the more expensive cars are SUVs. That initiative passed with flying colors, but it's been modified by legislatures and local governments since.

Voters often shoot themselves in the foot. Washington State has also never voted for an income tax, yet people keep grumbling about the wealthy.

Hopefully Washington voters will be more enlightened in the future. Maybe bigger cars should pay more for license tabs.

Rather than basing license fees on vehicle cost (like was done in pre I-695 days), base it on fuel efficiency? Charge the gas guzzlers more? That's what the survey of (at least) California residents indicated, according to that Gene Burns show.

Of course some poor folks drive gas guzzlers as they can't afford the more efficient cars; especially the hybrids.

Also, now that the used car market is being flooded with gas guzzlers that folks are trying to unload, poor people are buying them.

People should just ride the bus or bicycles in my opinion.
Posted by Theslowlane Robert Ashworth at 1:34 AM