Let the Sonics go to Oklahoma 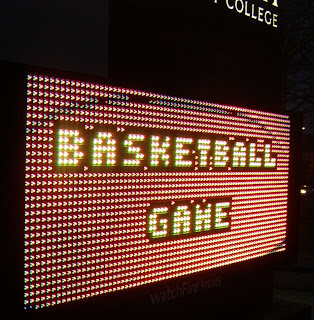 I'm not a sports fan anyway.

I've often thought they should name professional sports teams after corporations rather than the cities they happen to be residing in for the moment. Players come from all over, teams don't really represent the cities they play in anyway. It's basically all about national TV revenue and so forth.

College teams tend to be more about the region and city they are based in. Publicly owned. UW Huskies are not likely to move.

I don't follow sports that much even though I grew up in Pullman, WA. Home of the WSU Cougars who supposedly had a good basketball year, 2007-08 season.

I'd rather ride my bike, go dancing, do aerobics; something more interesting that watching a game on TV. Wait a minute, I don't even have a TV. A computer, yes, but no TV.

* Image of reader board at Whatcom Community College.
Posted by Theslowlane Robert Ashworth at 6:36 PM