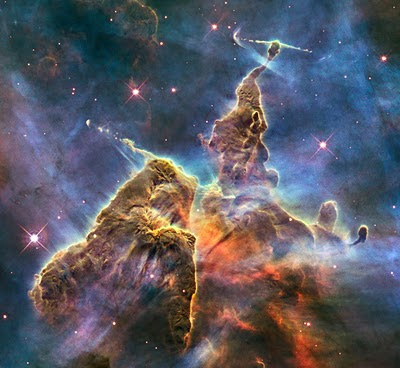 I say, "even if you don't live in a big fancy house, you can still say you live in a fantastic universe."

Hubble's 20th anniversary image shows a mountain of dust and gas rising in the Carina Nebula. The top of a three-light-year tall pillar of cool hydrogen is being worn away by the radiation of nearby stars, while stars within the pillar unleash jets of gas that stream from the peaks.
Credit: NASA, ESA, and M. Livio and the Hubble 20th Anniversary Team (STScI)

A brilliant white core is encircled by thick dust lanes in this spiral galaxy, seen edge-on. The galaxy is 50,000 light-years across and 28 million light years from Earth.
Credit: NASA and The Hubble Heritage Team (STScI/AURA) 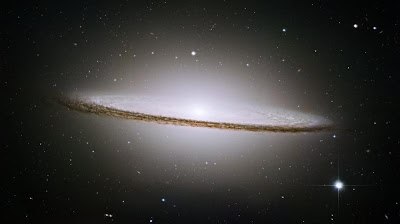 Last few posts, I've been on a "space roll." Just found out that this is the 20th anniversary of Hubble. Thursday was Earth Day and Wednesday was "first light" for a solar observatory.

I was a custodian at the Bellingham Yacht Club when Hubble was launched back in 1990.

Back then, something called "a spherical aberration" caused images coming back from the Hubble mirror to be blurry. Not as easy to fix as cleaning the mirrors in Yacht Club bathrooms with Windex.

Still, scientists were able to figure a "work around" and some good science came from Hubble, even in the early years.

Then Shuttle astronauts went on that repair mission in 1993 and solved the problem; not with Windex, but a set of mirrors, called COSTAR- "Corrective Optics Space Telescope Axial Replacement."

Worked like a charm. COSTAR has since been replaced because Hubble's newest cameras have the feature built in.

When I get a jug full of nickels, dimes and pennies, I go to the supermarket and pour them into a vending machine called Coinstar. It tallies the coins for me. Much easier than counting out all those pennies by hand. Ah, technological innovation.
Posted by Theslowlane Robert Ashworth at 1:48 AM