"Age diversified" is more inclusive than "all ages" dance

All ages dances tend to not really be all ages. They are usually mostly teenagers and folks under 21. All ages must mean inclusive of folks who are under the legal drinking age of 21 as well as others who are over 21, but the emphasis is that folks under 21 can go.

We need a new phrase which is inclusive of all the ages from childhood to senior citizen. How about "age diversified?"

Back when I was a teenager, I didn't dance very much. The music wasn't that great. Not easy to dance to heavy metal. Pullman, where I grew up, there was a youth center in the city hall building. I missed most of the dances, but remember standing in the parking lot showing off my multi-band radio to folks heading into the dance. I didn't go inside, myself, but thought the folks headed to the dance would be a good audience for taking a tour of my radio before they headed into the dance.

Then along came disco when I was in college, but I didn't appreciate it at the time. There were a few dances, but they weren't very well attended. There was one that I described as a waste of disco power. The music blasted into a mostly empty room. Even at it's height, the death of disco was being pronounced. "Disco sucks" was a popular phrase, but so many of the old favorites are disco tunes. It just wasn't appreciated in it's time. Disco favorites sure have a lot of energy. Often played, these days, on oldies stations. It is heard in supermarkets as background music, but no one is dancing. Unfortunately dance bars seem to avoid disco, these days. They seem to prefer some kind of "house formula" that sounds like music fragments remixed and then extruded from a machine. I've never been much of a bar person anyway.

In the 1970s, the gay club at Western Washington University had a few dances, but even then disco was usually avoided. They had garage rock bands, a few times, that were basically too loud. At one dance, a straight person walked in not knowing it was a gay dance. He sat there for a few minutes and then, realizing what it was, he bolted for the door. On his way out, he started grumbling about wasting his money, so to amend the situation, he decided to steal one of the potted palms out in the main foyer of the Viking Union. The night clerk at what I then called the "candy counter" chased him down the street demanding he bring back the stolen property. He came back looking like a Santa Clause delivering the Christmas tree only it was returning the potted palm. Then he fled down the street.

Those were the days? Actually, the best dancing is really today for me. Bicycling and dancing has kept me limber in recent years, yet most of my earliest dancing memories are more dis functional.

It wasn't till the early 1980s that I started realizing how fun free form dance could be. Maybe the earlier dances were more of a couple's thing and if you didn't have a mate, you felt left out. In the early 80s there was something called the Fairhaven Undisco. No offense to disco, but that was a catchy name. People dancing mostly by themselves and the whole room kind of dancing together. It was attended by many ages, including a few seniors. 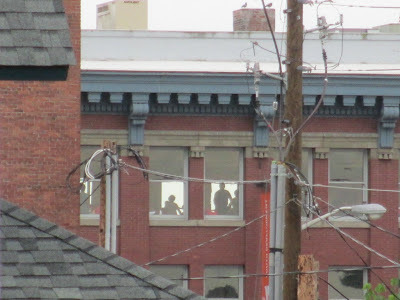 Speaking of Zumba, aerobics was big in the 1980s. It's still done today, but not as big as it was in the 80s. Bellingham YMCA used to have big aerobics classes in it's old gymnasium. Around 75 folks in a big circle around the instructors. People would sometimes even come in costume. Now it's in a smaller room, but similar idea. Somewhat of a shadow of it's former gymnasium self, aerobics and Zumba music still energizes upstairs classes at the Y.

Possibly my favorite movement experience now is the 5 Rythems Dance offered at Jenny Macky's Presence Studio in downtown Bellingham. Age diversified and as full of energy as one wants. Happens all year round on both Thursday evenings and Sunday mornings.

Bellingham is also lucky to have dances in the parks sponsored by the parks department. Bands come to the band shelter at Boulevard Park every other week in the summer months. There are concerts in other parks as well; like Thursdays in Elizabeth Park. Big crowds often come and dance to these free concerts. Very age diversified and a good way to promote public health. 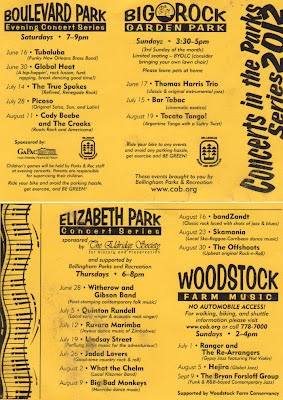