The American dream needs to be redefined

I'll vote for whoever the Democratic Party's nominee is for 2020. One problem is pretty much all major candidates, including even Bernie Sanders, are trying to bring back a vision of middle class America that may no longer be viable.

Income inequality is part of the problem, but there is a deeper problem, in my opinion. The old sense of American Dream isn't likely to come back. Growth in population and prosperity has now bumped up against environmental limits. Not just environmental regulation; as some right wingers contend. Lots of changes need to be made in the way we live, transport ourselves and so forth. We need more sustainable lifestyles, neighborhood planning and economics.

Anger against the 1%, or anger in general against anything, can be problematic. This may be an exaggeration, but think Syria. Anger often turns against everyone. Just overturning the 1% isn't going to bring back the so called American Dream for everyone.

I am for raising taxes on the wealthy, but there's a lot of changes that need to be made all up and down the income ladder.

I've been writing that traditional American Dream is, for the most part, no longer viable. In some way, I grew up in that dream, but it was also a bit different than some people's expectations. My family did live in a single family home with a yard and garden, but there were towering college dormitories practically across the street from us. If the wind was blowing a certain direction, during college toilet paper fights, our trees got decorated. My dad often walked to work. It wasn't too far. 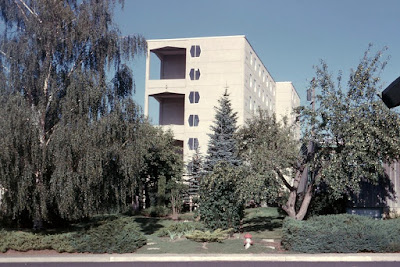 View from our driveway 1963. Large college dorm nearby. Photo by my brother William Ashworth.

In many ways it was an idyllic childhood in town next door to a major university. I did have some problems in childhood, but all and all, it was pretty decent.

Some things were less extreme back then. I appreciate that I had my own bedroom back then, but the room was smaller than my small studio apartment today. We had a yard, but we weren't in a rural setting.

I think some of that sense of stability can come back, but circumstances do change. There are more people in the world today. At the same time expectations are higher in many ways.
Posted by Theslowlane Robert Ashworth at 4:42 AM