Some feelings about dancing in front of the computer on Zoom; distancing innovations during the virus scare.

Last Saturday I went dancing. Virtual dancing using Zoom, but I also experienced the limits of this experience. I found myself missing the real world dance floors I've experienced; such as at Bellingham's Rumors Cabaret in recent years before the corona virus shutdown. 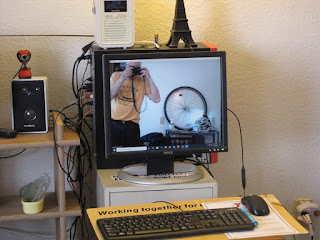 There is a difference between looking at a screen and being immersed in the experience. In real dancing, the people, lights, music and so forth is all around. Online, it's contained in a screen. As technology evolves, more immersive online experiences can happen.

Having said that, it was a good experience. Folks dancing in front of their webcams. I was dancing also, but felt a bit funny doing it in my small apartment. I did work up a sweat which is good; like aerobics online.

The Faeries have some other things on Zoom; such as a talent show and personal sharing in events called "Heart Circles."

How they choreograph the dances is by placing the images from each webcam up on the feed as the main image. These images would change frequently. I was "on" for a few brief periods.

I kept looking out the window at the sunny day outside, tho. I thought, maybe I'd rather be biking somewhere? Biking is an immersive, all around, off the screen experience. One that doesn't rely on being in crowded spaces; such as dance floors.

Actually, some dance floors aren't that crowded. One can spread out in large dance studios with a small number of people relative to the space. Economics plays it's role. Can dance venues pay the overhead with smaller gatherings? Are people motivated to go to smaller dances or do they fizzle out below a certain threshold of excitement? Are some dances like trying to build a fire with wet wood?

Dancing happens in parks during summer months with outdoor music, but it looks like local park dances have been cancelled here in Bellingham for this summer. Public officials don't want to take the chance of people being too close spreading the virus.

Often, at park dances, the park is admittedly quite crowded. In the past, most of the crowd is sitting in lawn chairs listening to the music. A smaller number of people are actually dancing. If it was just the dancers, they could spread way out across the space, but people do tend to like to cluster. Maybe people should learn to dance farther apart.

I was going to say, "more spaced out," but that has a different context.

Meanwhile the cyber dance, I did Saturday, was good in it's own way. It was put together by Radical Faeries from all over the world. Maybe around 100 dancing, and 200 watching?

People can be creative in front of their cameras. Lights, background videos, folks outside in front of their Smartphones. Lovers and groups of people cuddling. Various stages of undress. Sometimes eroticism was included, rather than banished; as is so often the rule in mainstream society.

The Radical Faeries are going online more and more. This makes their events accessible in places like Bellingham that don't really have much of a faerie presence.

The Faeries have a social network that's like an alternative to Facebook. It is a membership site, but no cost for memberships.

It's not as exciting as Facebook, in some ways. Less going on. Remember, there's an economy of scale in the phenomenon called "the network effect." More people, more friends more stuff on Facebook, but the faerie site does have some good things including information about the dance party and other events. Also there's nudity on the faerie site. Something that isn't allowed on Facebook.

On Saturdays, the faeries have been doing a talent show called the "No Talent, Talent Show." It's usually live streamed on Facebook as well. Kind of wacky and fun.

While I'm at it, here's a link to the Faenet site. Faenet.org
Posted by Theslowlane Robert Ashworth at 11:32 AM