At Arecibo, could drones replace the suspended platform if the bowel is salvageable? Just an idea. 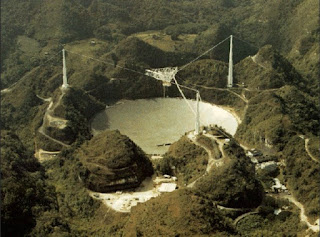 National Science Foundation is decommissioning the giant radio telescope Arecibo in Puerto Rico. Two supporting cables has broken and the suspended platform is likely to crash. They say it's too dangerous to try and fix. Plans are to try and dismantle it safely.

I got to thinking; could drones revitalize the telescope? After the platform is dismantled, could they repair the dish below? Instead of a suspended platform, could drones be used to hover receivers over the dish?

This telescope has played an important role in Puerto Rico's economy. During this interview on NPR Science Friday, one person said it was an inspiration, beyond just medicine, for students to study science. Medicine isn't a field every aspiring scientist on the island would necessarily want to go into; especially if one is afraid of blood, according to the interview.

For astronomy, the telescope has been the largest radio astronomy dish in the world until recently being topped by a bigger one in China. While no longer tops, it was still quite useful. Especially useful as a powerful radar for tracking asteroids and doing solar system research. It was being used for some other projects, as well; including accurate measurements of pulsars as one way to see evidence of gravity waves across the universe.

I remember following news in 1998 when SOHO, sun observing satellite lost communication with earth. They used radar from Arecibo to find that satellite again and then restart communications. The satellite was rehabilitated and is still in service today. If it hadn't been for Arecibo, SOHO would have probably only lasted from it's launch in 1995 till 1998. It's still working today as one of several satellites observing the sun from space. More bang for the buck.
Posted by Theslowlane Robert Ashworth at 6:39 PM