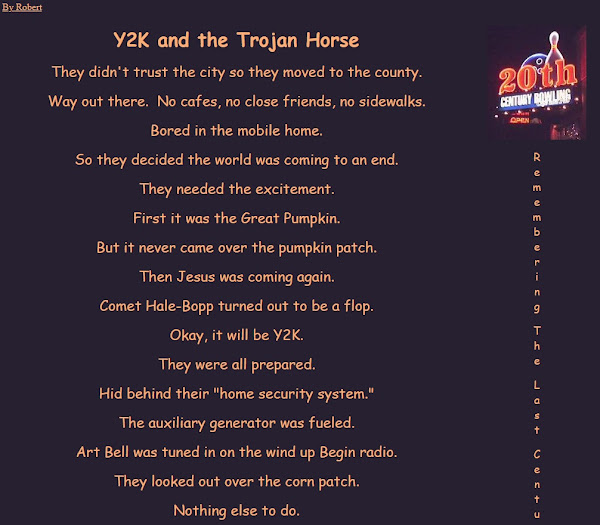 During my high school years, I'd follow the new year's progress across several time zones by picking up distant AM radio stations at night. Starting in the Central Time Zone and then the Mountain.

When New Year's came to the Pacific, our family would be gathered around the television to watch a replay of the ball dropping in Times Square.

Back then, folks looked forward to the distant year 2000 thinking it would really be a momentous event.

By the time 2000 arrived, most of the big celebrations were cancelled due to terrorism fears. A terrorist plot had just been unraveled. It was planning to bring bombs to the US via the Blackball Ferry from Victoria to Port Angeles.

Later it was found that the plot was destined to Los Angeles, but celebrations were cancelled all over, including in Seattle. I had plans to take the bus to Seattle anyway where my friend Rick Segreda was planning to usher in the New Year.

There was also worry about the Millennium Bug, known as Y2K. Computers all over the world had been programmed with a 2 digit clock that didn't take a new Millennium into account. There was worry about how this would effect banking and all of civilization.

Survivalists were building bunkers and hoarding food to ride out social chaos. Meanwhile institutions were spending lots of money upgrading their computer systems for a smooth transition.

I predicted that Y2K worry was mostly hype.

Someone sent me a news clipping, about this poor fellow, who had worked on an underground bunker for his mobile home. He had lots of fuel stockpiled. As he was doing the finishing touches on his bunker, he accidentally set the fuel tank on fire with his welding torch. He lived, but everything he owned was blown to bits. His self fulfilling prophecy came true.

Meanwhile, in Seattle, the area around the Space Needle, where a big celebration had been planned, was fenced off. The friends, I was with, drove down there to take a look. It was a strange sight.

The Space Needle, itself, looked ready for a new era as powerful spotlights shown up into the sky from the top of the needle. It looked futuristic. It was off in the distance behind cyclone fences and an abandoned Seattle Center.

Car headlights, in the city, looked futuristic as well. The beginnings of the use of bright blue, even purplish blue, headlights. Xeon lights were becoming trendy. Those headlights had a UFO look to me.

Eventually, we parked at Gas Works Park and watched fireworks set off from the Space Needle.

Just before midnight, clouds rolled in around the Space Needle obscuring most of the view. It looked kind of like sheet lightning. A few local fireworks, set off from cars in Gasworks Park, made people nervous with all the terrorism talk.

Listening to a talk show, on Seattle's KIRO Radio, with people grumbling about what a farce they thought the celebration was. Instead of a grand new beginning, it was this. Fireworks you couldn't really see because of the clouds.
Posted by Theslowlane Robert Ashworth at 12:58 PM