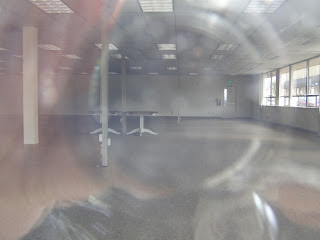 Reflection from my camera lens creates some art as I pressed it against the window of 216 Grand. Trying to show a "bland and unoccupied" office inside.

Plans are to tear the current building down and put an arts center in its place.

An Art and Children's Museum.

It will be partially funded by "Bellingham Public Facilities District." Also there is money from private and other sources.

A curving glass wall will reach to the sky and shimmer with reflection. This is part of the new plans for 216 Grand that have recently been revealed.

Not quite Centre Pompidou in Paris, France, but for Bellingham, WA. a step loftier than the building that is now occupying this space.

Our often called "City of Subdued Excitement" is (as usual) ambivalent about an arts center.

"Is this really what the taxpayers should be funding?" reads a chorus of comments.

Others look forward to something beyond the "drabness of day to day survival."

For many years, it was the "Washington State Employment Security Office."

Since those days, that office has changed names and moved to smaller quarters. Much of it's work is now done with the magic of Internet technology. Back in the old days, it was "bulletin boards."

Hoards of people could be seen pondering job notices pinned to the board. Folks looked depressed. Many would walk away muttering, "nothing, nothing."

There was a recession in the early 1980s and that board was nearly blank. Most of the time, it was a flow of "part time nursing home assistant," "fish cannery work" or "taxi driver."

Once, there was a posting for "executive secretary to Western Washington University's President." The list of prerequisites was so long, it could have been from another planet as far as folks standing in line were concerned.

One could hear people muttering, "must be smiling and energetic" with disgust.

Then there was the forms to fill out. The dispatching of unemployment checks, the debates between clients and office workers over "fine print of eligibility." Everyone's "life story" trying to be compressed onto forms in the file cabinet.

"Can you write all this in that tiny space provided?"

That was the employment office.

There were some artists inhabiting that space, but I doubt very many would advocate preserving the present building for it's "artistic character."

Our jury is still out on how much the new building will serve and inspire people. I don't have a strong "yes," or "no" opinion here.

It will be "public space" which is better than an economy that just cranks out a bunch of showboat homes. When effort goes to space that everyone can benefit from, I'm less critical.

On the other hand, construction of a building doesn't really create employment for artists. It creates jobs for engineers and contractors. Meanwhile a lot of unknown artists still work as waiters and taxi drivers. Maybe there's nothing wrong with that. Experiencing life as a waiter could be "source material" for good art.

When the center gets built, I hope it doesn't become too snooty. I hope that a wide range of expression can use the pallet.

There is a creativity movement at the grass roots called Mail Art. It really flourished "big time" in "pre Internet" days of the 1980s. Much of that art phenomenon was outside of established galleries. Artists went around the "system" sending creativity to one another in the mails.

In Mail Art there is a phrase which goes,

"Mail Art is not fine arts, it's the artists who are fine."

Like the job listings that used to be confined to cards on the bulletin board, much of mail art is now just "the norm" of the Internet. One could ask, "has the Internet killed Mail Art?" Or "Has Mail Art grown and turned into the Internet?"

Back in old times, circa 1980s, it was said that most job listings didn't go through Washington State Employment Security. They usually went around that system as well. 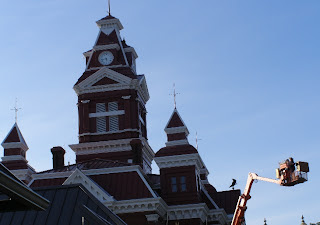 Working on old museum building that was once a fancy city hall. Plans are to continue preserving it for historic displays. They say the 1892 building gets passed up by travelling exhibits who fear things like uncontrolled humidity; thus leading to a "wish list" for more museum space in Bellingham. 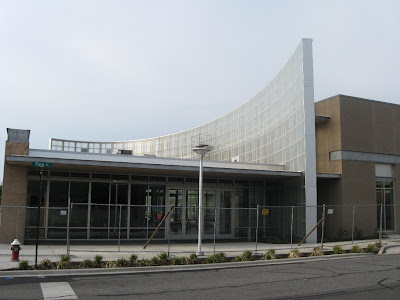 With curving glass wall. Should be open some time in September, so I see on a sign at the old children's museum location. It's quite a change from what was there before.
Posted by Theslowlane Robert Ashworth at 8:51 PM

It is so refreshing and inspiring to see the pride that you take to living in Bellingham...and that you create an abundance of impartial and informative articles from a personal/grassroots perspective...I enjoyed your article, and looking forward to further reading the great wealth of writing that you have on here...
Yeah...I worked in that building about a year ago...making a float for the parade of the species parade...A lady Named Carol runs the costume making workshop that has been held there for the past two years....I made a giant daddy long leg spider costume...you may have seen it...