Are today's explorers nicer and more civil than yesterday's 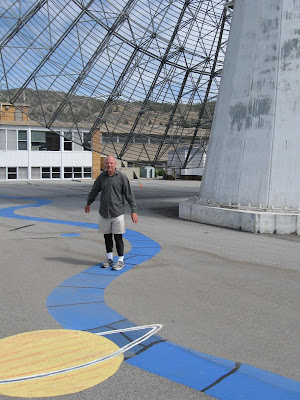 Yesterday was Columbus Day, but many say Christopher Columbus exploited native peoples. Explorers of past were often plunderers after the gold, many were warriors, capitalists and empire builders.

Today's explorers could be a different lot. Astronomers, for instance.

Some of them sitting in faculty offices at universities applying for time on research telescopes.

Image at right: I'm exploring around Penticton Radio Observatory during my 2009 bike tour.

Many of today's explorers are writing grant proposals, cooperating with scientists all over the world, dealing with NASA, learning how to navigate vast bureaucracies. Not necessarily planting their flag on the lands of native people's and claiming territory for Spain or Great Britain.

Some of them are helping students and patiently sitting through faculty meetings if they are at university settings.

Not seeking a lot of gold from Inca tribes even though some astronomers may have fairly high salaries.

Most of them are likely to be writing articles and attending conferences, not blazing trails with shotguns.

They often donate money to the United Way, their local NPR station and the food bank.

They spend time at libraries, think through puzzles, sit in front of computers.

At times they might even listen to harpsichord music.

Maybe today, they're a bit on the yuppie side, but explorers of today seem kinder and gentler than many of past centuries.
Posted by Theslowlane Robert Ashworth at 3:26 PM