Canadian dollars may be worth more, but our dollars might be prettier 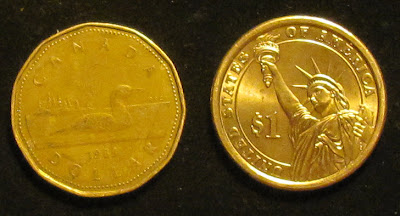 Our one dollar coin piece is pretty, but few people use it. Americans are kind of stuck in old traditions and don't seem to adjust to new things as quickly as Canadians do. Of course the Canadians don't have much choice. Their paper dollar is no longer printed. Also, Americans still remember being burned by the Susan B Anthony dollar. Nice idea, but it looked too much like a quarter. Seems symbolic of American's mistrust of bureaucracy. Sometimes I do wonder about planning. Both government planning and that of corporations. Our new dollar coin is fine, but people, and businesses, seem reluctant to use it. Openness to new things would help our economy.
Posted by Theslowlane Robert Ashworth at 12:33 AM

Clark in Vancouver, BC said...

The Canadian dollar coin initially had opposition to it. I remember a short time after it was introduced, a clerk apologized to me for not having any dollar bills to give me for change. I said I didn't care and that dollar coins were okay. She looked at me like I was a freak or something.
In any case, they just took the dollar bill out of circulation and after a few years the coins were the only type of dollar available.
Later on when they came out with the two dollar coin there wasn't much opposition at all because we had realized that the dollar coin wasn't so bad after all.
There is sometimes talk of a five dollar coin but I think it'll be awhile. It was costing the Canadian Mint a lot of money to keep replacing dollar bills when they wore out. The coin last longer. There's even talk of discontinuing the penny and just have all prices rounded off to the nearest five cents.