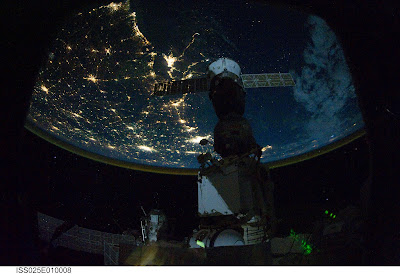 Like glistening jewels from space, cities near Gulf Coast of United States as seen at night from International Space Station.

Remember that cartoon showing Earth being ill with the disease "humans" while other planets try and comfort Earth?

I have a new variation of that cartoon idea.

In my cartoon (I can't draw) Earth is jumping with joy, all excited as humans are it's new creation. It's Earth dazzling with the excitement of civilization. Other planets are looking on with worried looks on their faces. They are saying to Earth, "you'd better be careful." "Don't hurt yourself."

In other words, humans are not thought of as a disease, but instead an accomplishment of Earth. Our civilization is part of nature, a crowning achievement of nature. Earth is happy, not sick. Still, there's some cause for concern. Other planets, looking duller than Earth, some just bland looking gas balls like Uranus, are cautioning Earth to be careful. They say to Earth, "just don't get carried away with your new newfangled humans."

I used photo from NASA Astronomy Picture of the Day, November 4 2010.
Posted by Theslowlane Robert Ashworth at 3:01 AM